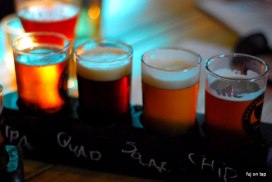 Let me apologize for the pictures I’ll post today from my last trip to NYC since it seems most bars there have their mood-lighting set to “Rape”. Rattle N Hum was the worst offender of the places we went to that day. Cave-like appearance at like 4 in the afternoon, lit mostly by tealight candles. Kinda a shame considering how beautiful of a day it was, but the dark is great for boozin’, not so great for taking pics. Also, being hammered by this point in the day didn’t help the photography, either. I digress.

After JD’s graduation and receiving his Masters Degree from Columbia, celebration was in order. We had several rounds of drinks and eats at a couple of bars of his parents choosing, but after that is was time to get to the real drinking. Rattle N Hum was our first stop, and we took advantage of the previous night’s Harpoon Tap Takeover while we were there.

First two beers were the Harpoon Leviathan Barleywine 2010 and 2011 versions. Both were “just OK” and didn’t really stand out for the style for me. We realized at this point that if we wanted to try the number of beers we planned on having there and still make it to any of our other destinations that day we were going to have to switch to flights. No biggie. We ordered two:

Honestly, other than the Double Trouble which I’ve had before, none of these beers knocked it out of the park for me. Most were good or better, some were terrible (Zuur, Chipotle). Next time I go to Rattle N Hum will be for a tap-takeover I am really looking forward to (like the Cigar City one a couple of weeks ago, or their upcoming Founders night).

As for Rattle N Hum itself, it didn’t completely blow me away either. It’s one of those bars that are too small for waiter-service but they have it anyway, and you really just want to go to the bar to grab drinks but you get hounded by waitresses instead. Maybe things are different on a event night. I’ll let you know when and if I make it to one.