After that Voodoo Doughnut and Utopias (review upcoming) at Jon’s and a quick pit stop at The Ruck for some Hoptimum, we decided to make the trek to Schenectady to check out our area’s new craft beer bar: The Bier Abbey.

Now, I’ve been to Schenectady plenty of times for lunches at Morette’s, dinners at More Perreca’s and Bangkok Bistro, and shows at Proctor’s, but never have I been to Schenectady for just drinks. This was a whole new world for me, one that I probably won’t experience that often, but is definitely worth it for the change of pace.

When you first walk up to The Bier Abbey you’ll notice a few picnic tables outside for people to consume their food and drink during the good weather. Although I didn’t take advantage of this, Wednesday was the perfect night for this and each of the tables were occupied.

When you walk in the front door and pass the stairs heading to the second floor, it opens up to the bathrooms, kitchen, and (potentially) a small tasting room on your right. On the left is a gorgeous bar with adequate seating for about 10 or (more if you wanted to get cozier), with two walls of beer specific glasses sandwiching a huge assortment of carefully selected taps.

Before I even walked in the door, I knew what beer I needed to try: Oskar Blues G’Knight on nitro. The bartender, Spencer, said it tasted like an IPA creamsicle, and he couldn’t have been more accurate. This was god damn delicious, and if it’s something that’s going to be on tap more regularly you can expect me to go out there just to grab one of those every once in a while.

At this point Chad from Tri-Valley offered to take us for a little tour of the rest of the bar. The front has a few larger tables great for seating for big groups and on the way towards the back there are a few booths for the crowd that spills over from the bar.

The back room is a little dimmer and more intimate, featuring many two person tables and a few extra booths, all of which at least have the appearance of reclaimed wood. There’s also a large projector that might feature matinees in future, and some really cool metal artwork, all beer themed: 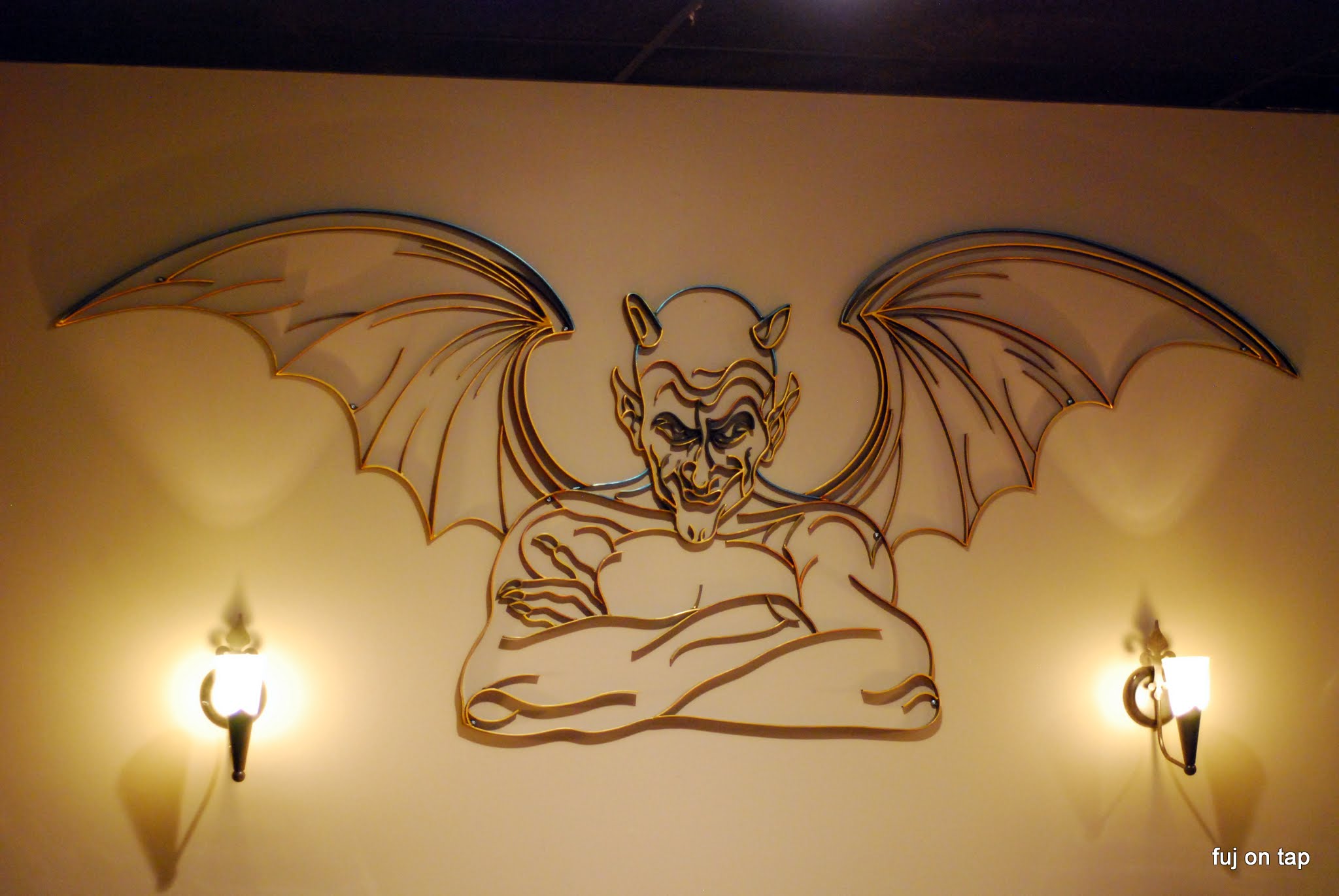 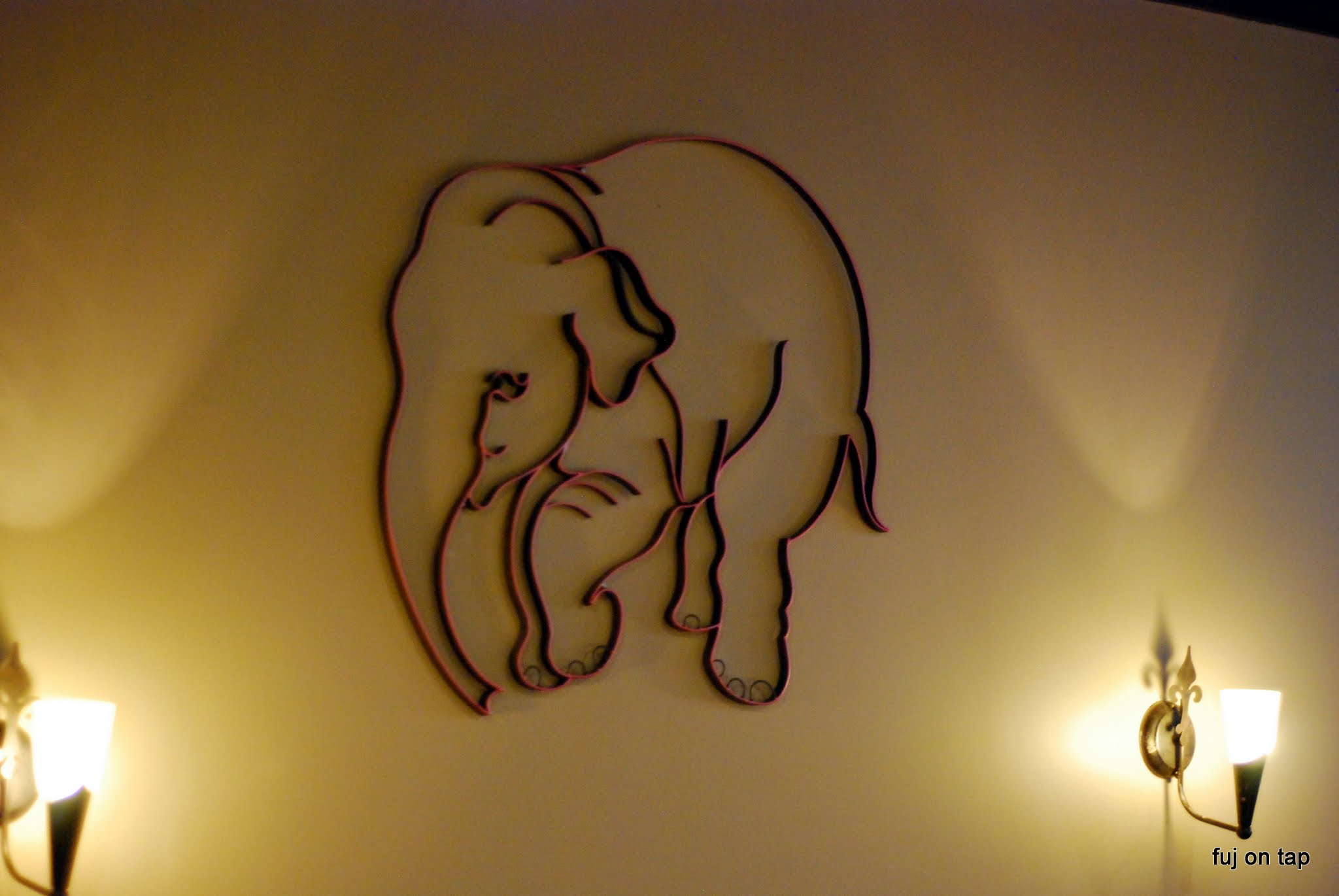 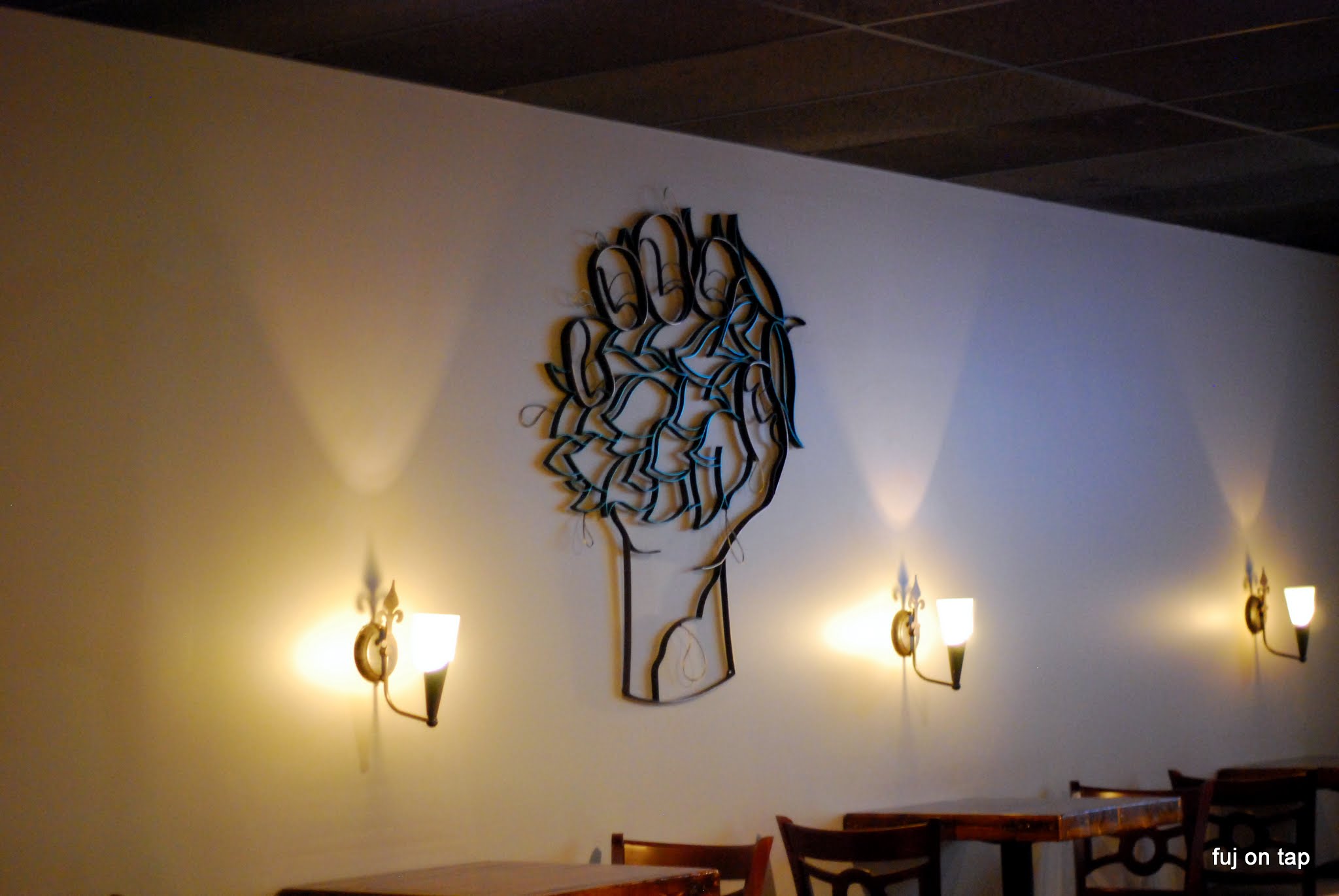 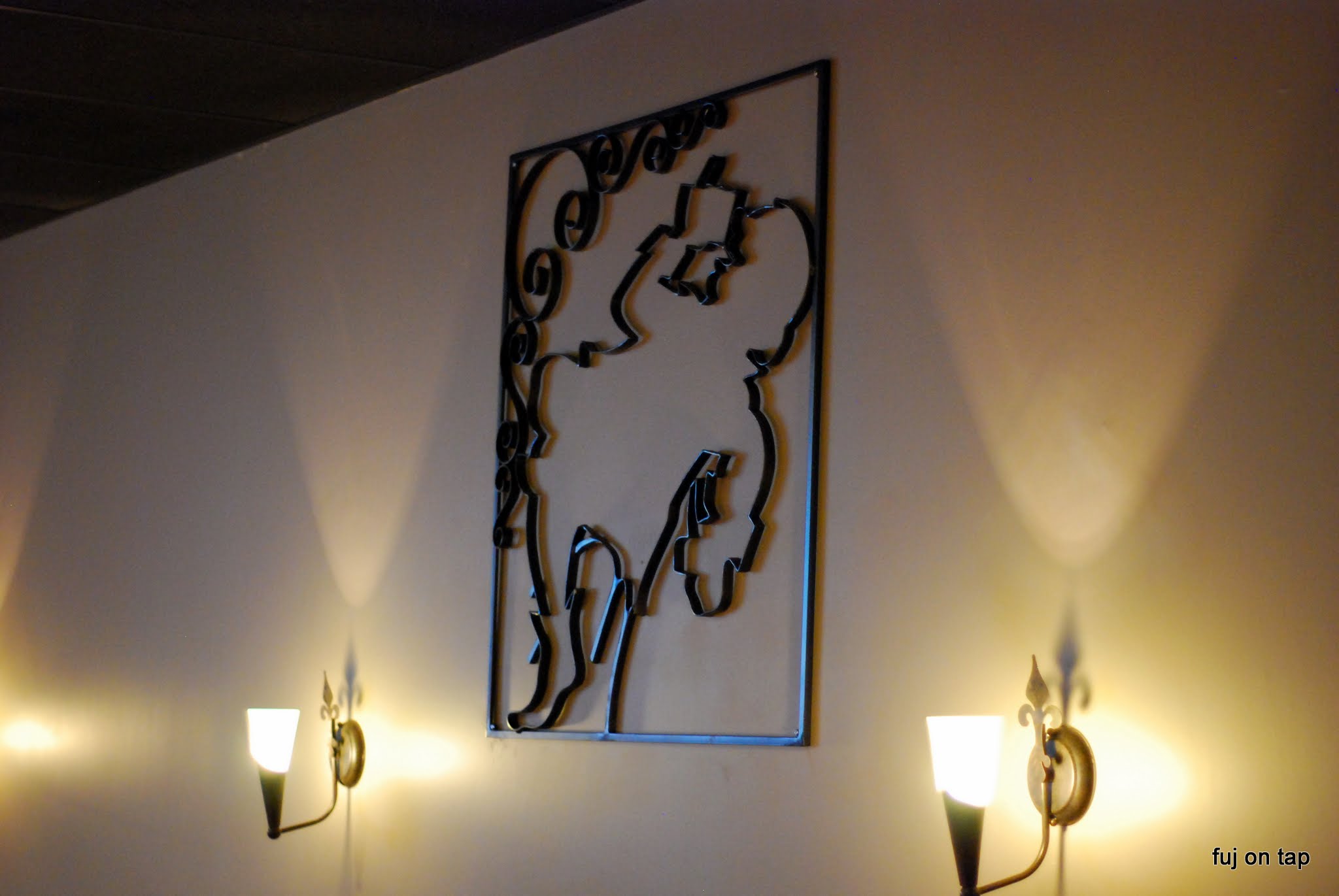 At this point, it was time for another beer, and seeing as though it was my 5th one of the night, I hadn’t ate dinner and it was creeping on 11PM, food was in order. (The turkey sandwich from Slick’s taunting me from the bar didn’t help, either.) Unfortunately, their kitchen wasn’t open yet, so grub had to be acquired elsewhere. Apparently pizza isn’t much of a big hit in Schenectady late night on a Wednesday, as the 8+ places that I called either weren’t open or wouldn’t deliver. I had to go find my own.

On Chad’s direction, we walked down to Perreca’s to see if they were baking any pies. The place was closed, the lights were off, but the door was unlocked. I saw a couple of people in the kitchen so I knocked and walked in. I asked for pizza and they obliged: 20 minutes later we had a 24-cut in our hands.

We walked back in The Bier Abbey like champions that just won a war. We clearly weren’t the only ones hungry as Spencer, Chad, and several of the patrons grabbed plates and dug in with us. Needless to say, I quickly made a few friends I didn’t pay for a drink for the rest of the night. 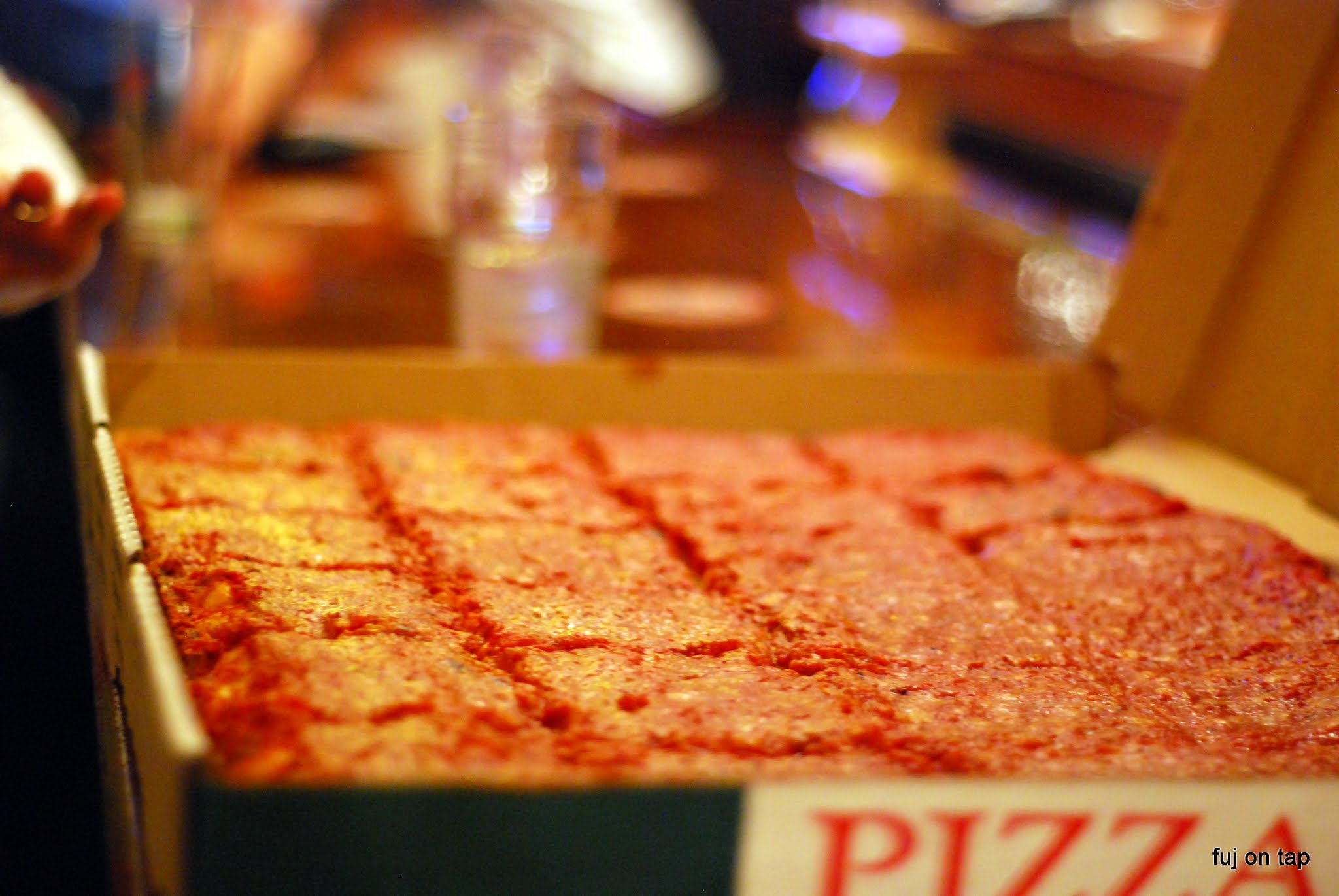 Speaking of the beers, I drink more beers from the good ol’ US of A more than anything else, so I let Spencer and Chad pick out the rest of the beers I had for the night. This included some Lava Smoked Imperial Stout, Ichtegem’s Grand Cru, and Samichlaus Bier, none of which I’ve had before.

Overall I can honestly say I was really impressed The Bier Abbey. The atmosphere is amazing, the knowledgeable staff was helpful, the tap list is extensive, and the little things like beer-specific glasses and art add a nice touch. (Although I’d be careful with all of those nice glasses while also having extremely open outside seating, those puppies are going to walk!) As I said, I’ve never had any of the beers I drank on Wednesday (the nitro was a first on the G’Knight) and there are still plenty on that tap list that I haven’t had. This is extremely rare for the Capital District. I’m looking forward to the next time I go back and I wish them the best of luck.

A few more pictures can be found here.

2 thoughts on “Soft Opening at The Bier Abbey”