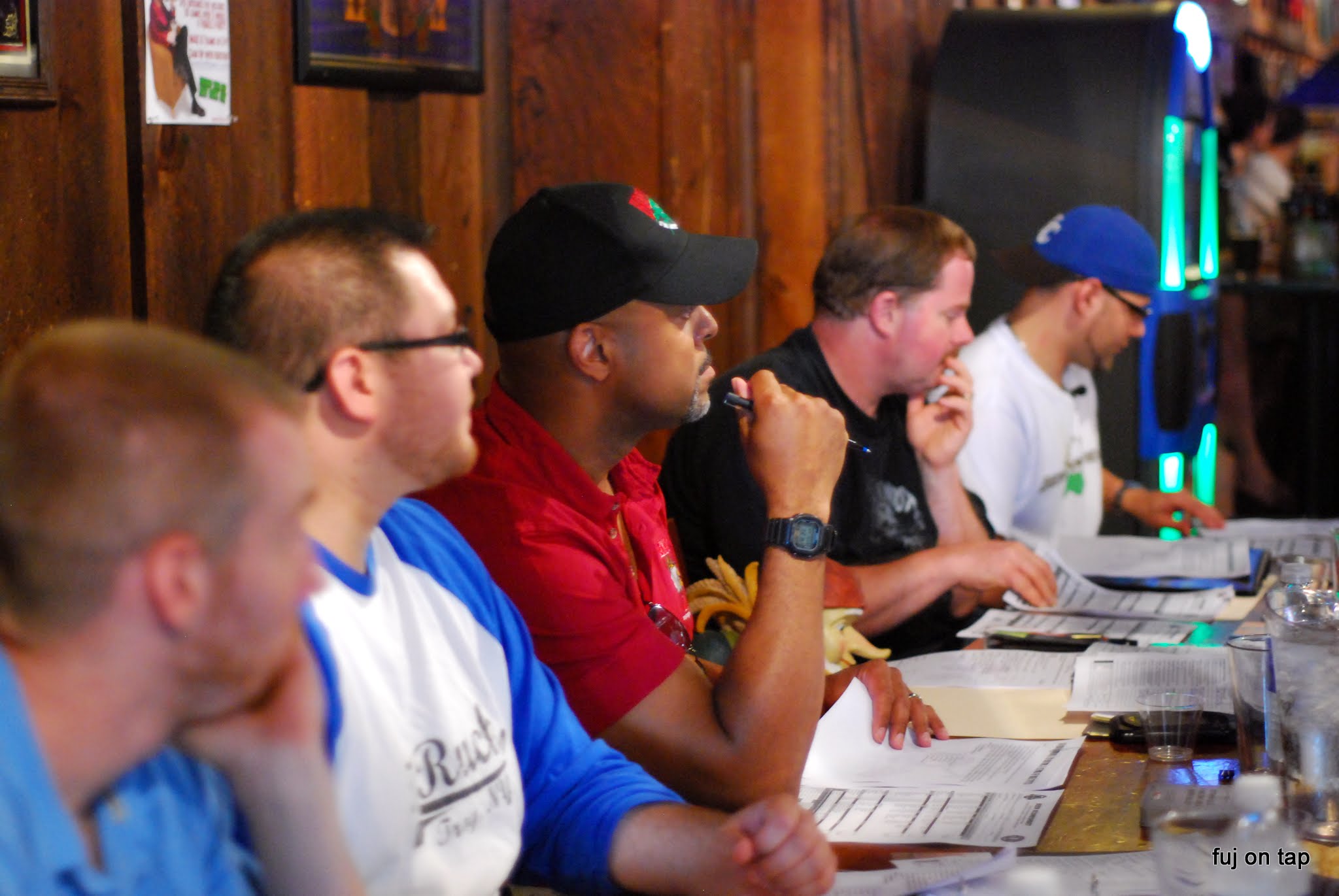 In order of appearance above:
The sixth judge was not present so the Gnomegang Gnome took his place: 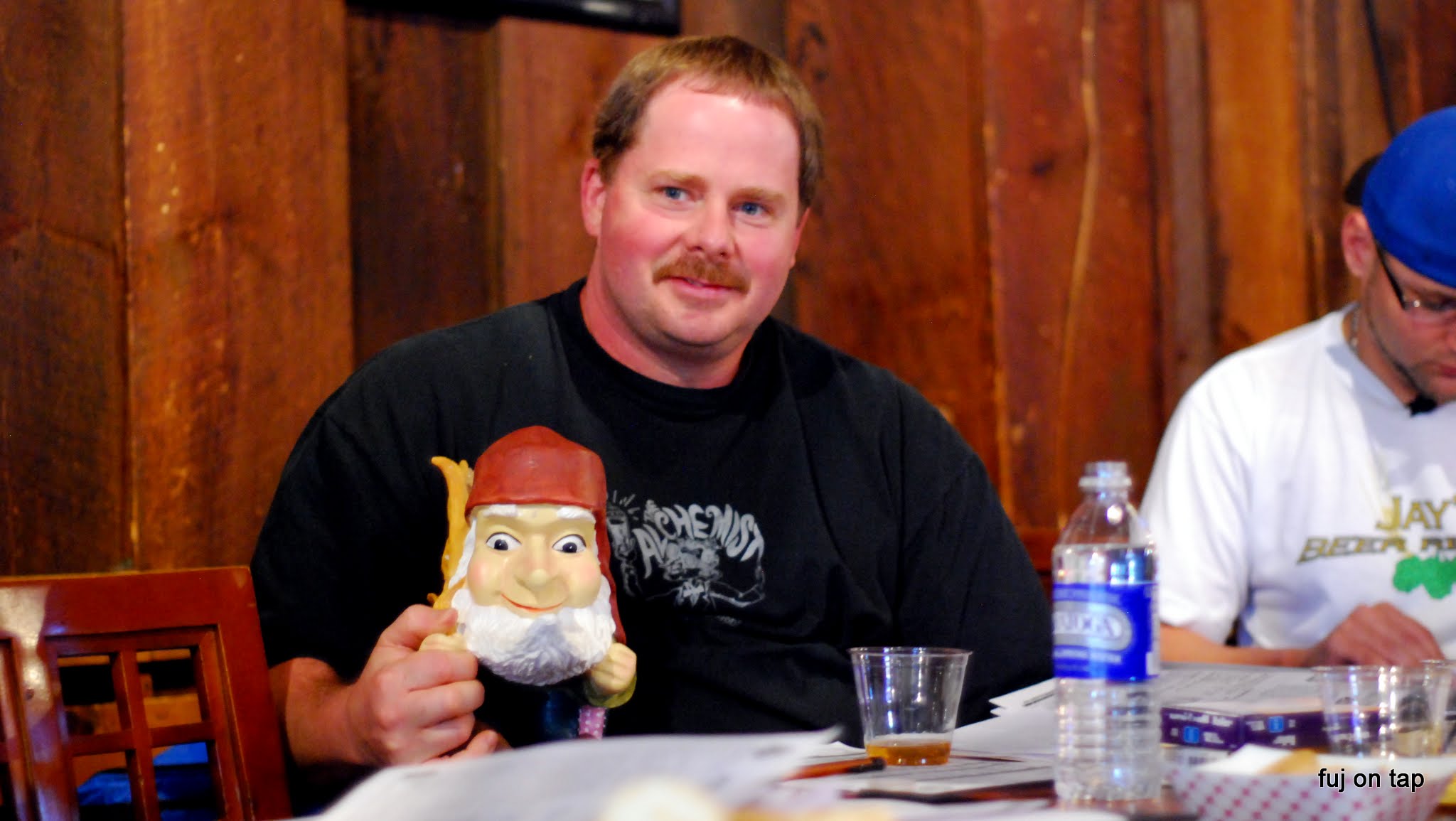 Let’s just say this was a LOOOOONG day. This was my first time judging beer, and it was a completely different experience than previous beer tasting events I’ve done. It’s not just giving a beer a yay or a nay. It’s analyzing each beer, seeing how it fits with the style of beer, seeing how it fits with the category it was submitted, and seeing if there are any flaws that knocks it down a few points. This is easy to do with a set of ten beers over a course of an hour or so, but when it’s 60+ beers over the course of 8 hours, it’s a totally different story. 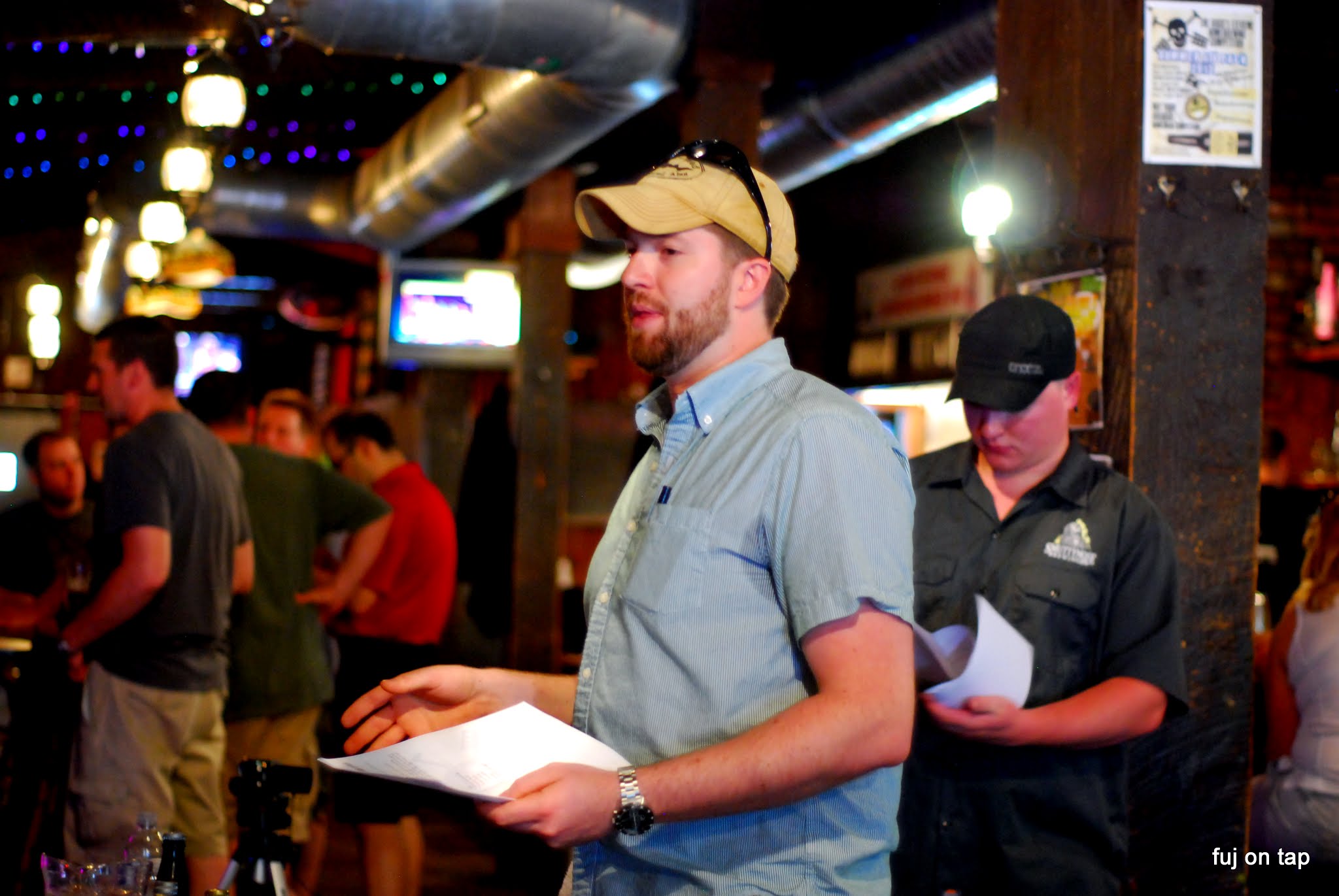 Bob explaining to us the schedule for the day. 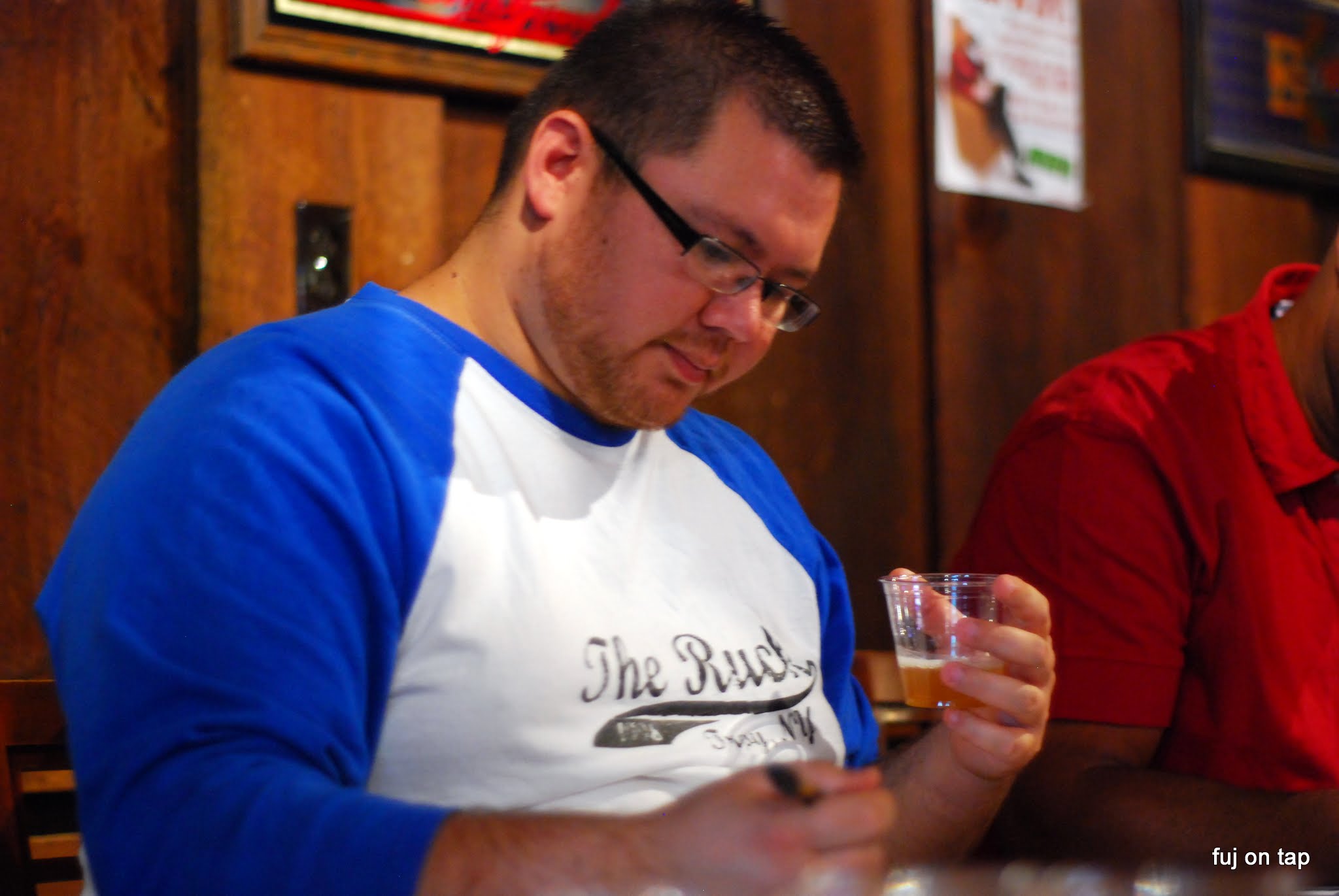 Me getting my judging on.

This was really a new experience for me. It was tough because, even though I may have liked a beer, I might have to score it lower because it didn’t meet the criteria for the category. Or maybe there was a beer that I didn’t like AT ALL but I scored high because it was true to the style and had some really weird ingredients that were required for the category. 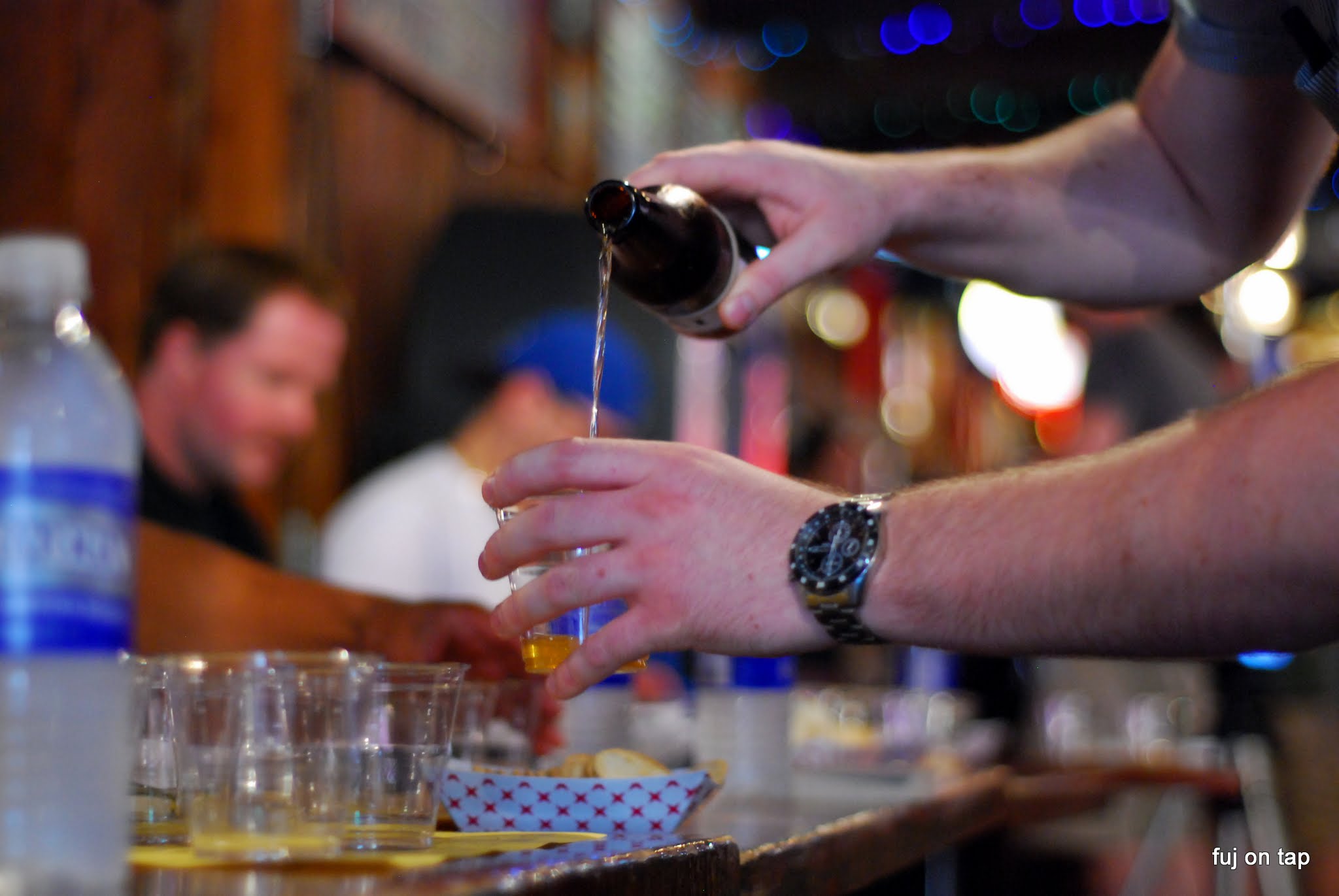 There were 6 categories for the day, with each ranging some 8-13 submissions for each round. Some rounds had some real hits. Stuff I would actually pay money for. Others not so much. 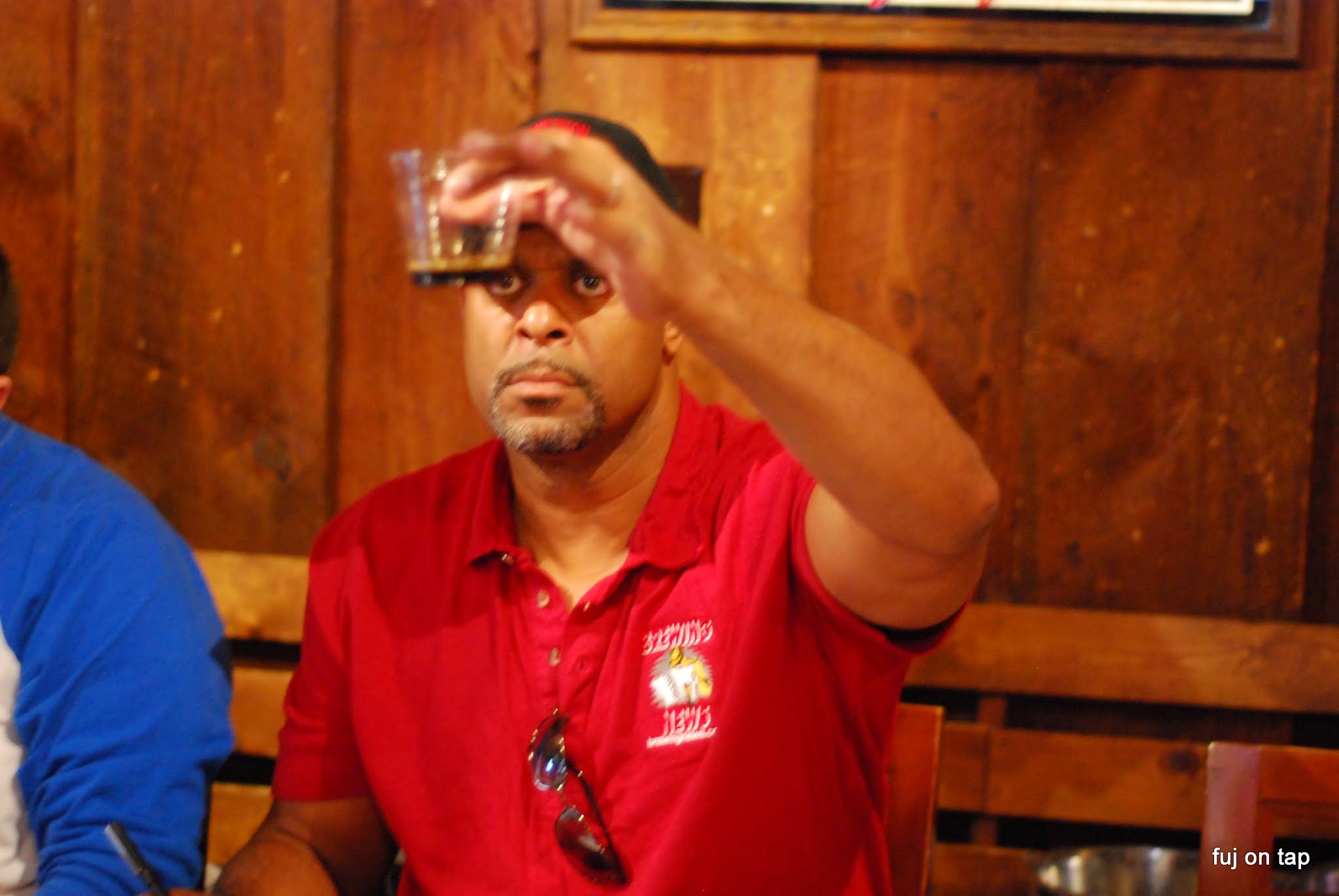 Howie judging the appearance of this brew. 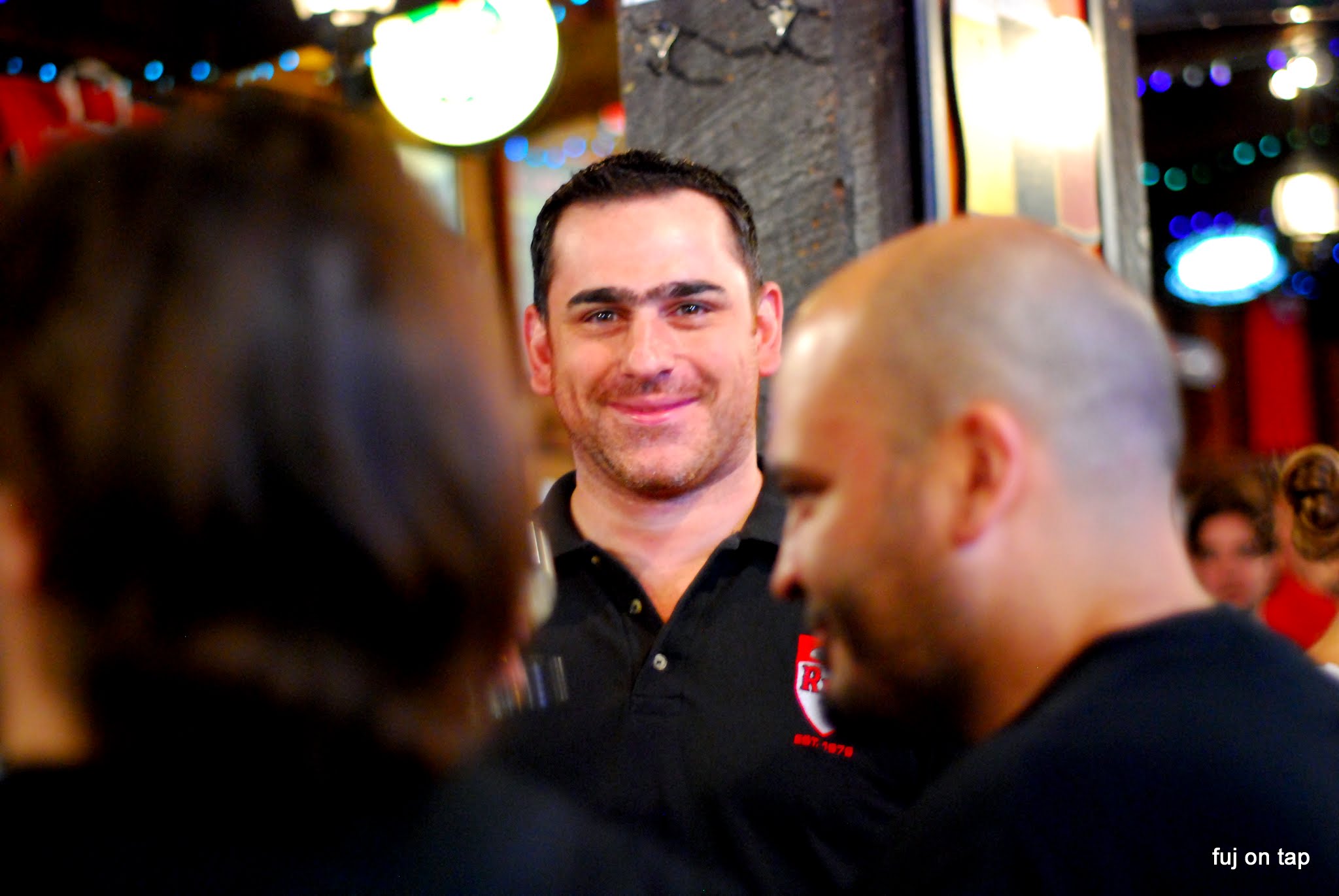 This wasn’t a quick process. We started at 1PM, and by the 4th round it was past 5 o’clock and Howie had to get going. By the end of the 5th, it was almost 7 and Lambic Larry was on his way. By the last round it was just Jay, Russ and I. 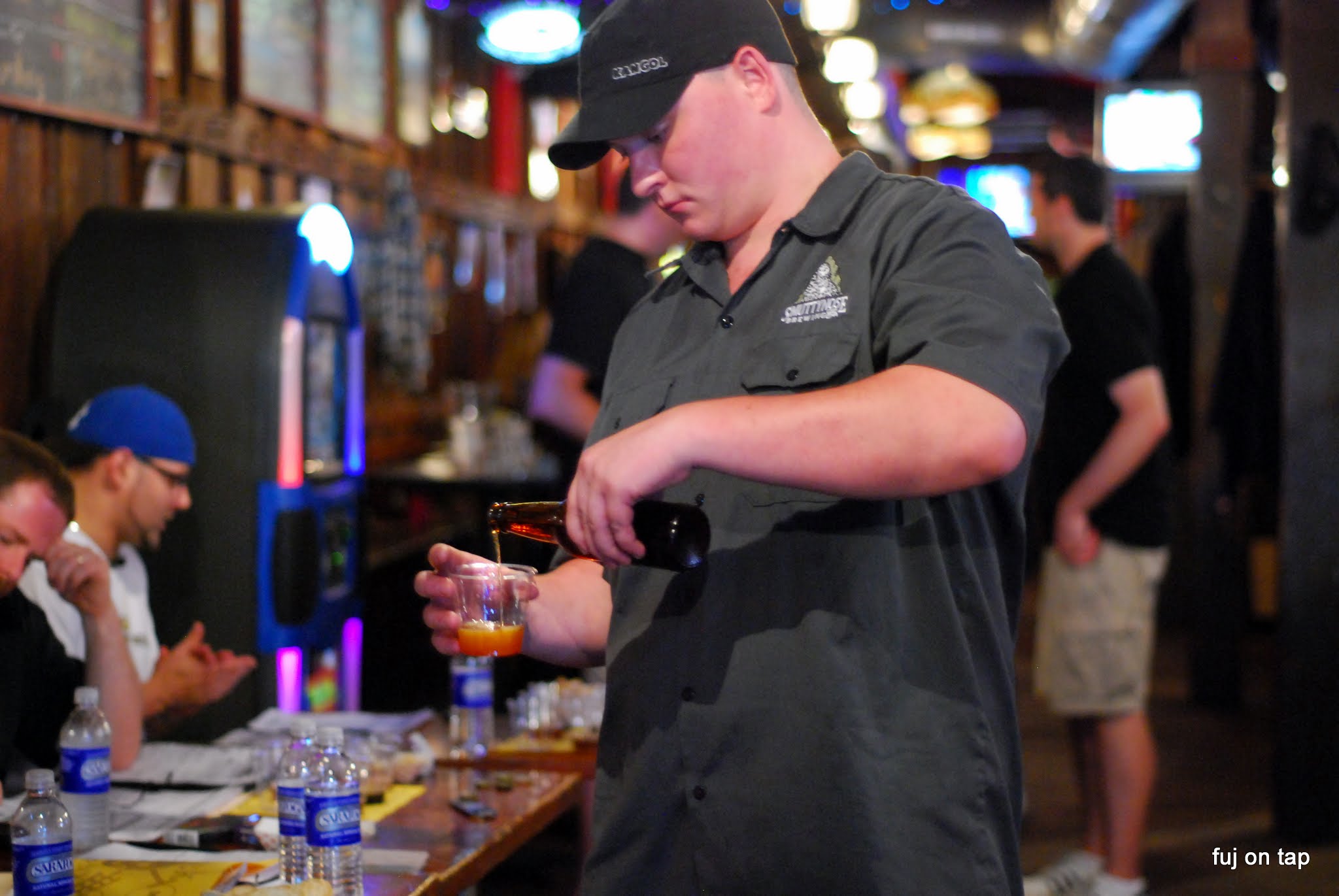 Matty pouring our next round.

Honestly, this sucked for the competitors who had submissions for the last couple of categories. Less judges meant greater room for error and less of a general consensus. Plus those of us judges that stuck around were mentally exhausted, our palates were shot and our noses were senseless. I really feel like we did not give the last few categories their proper justice and next year there should definitely be more judges, tasting less beers. 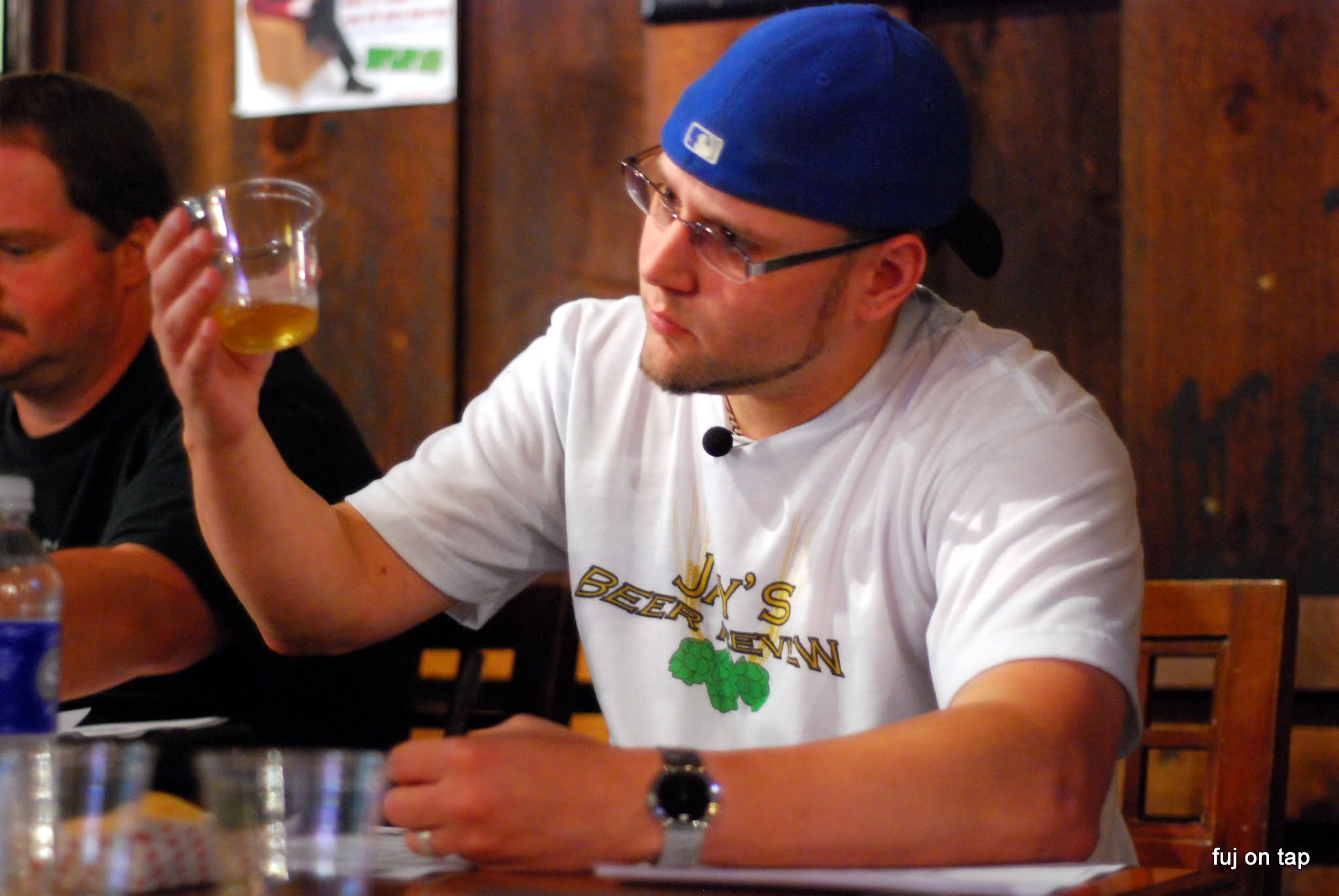 Round 6: Fruit and Spice 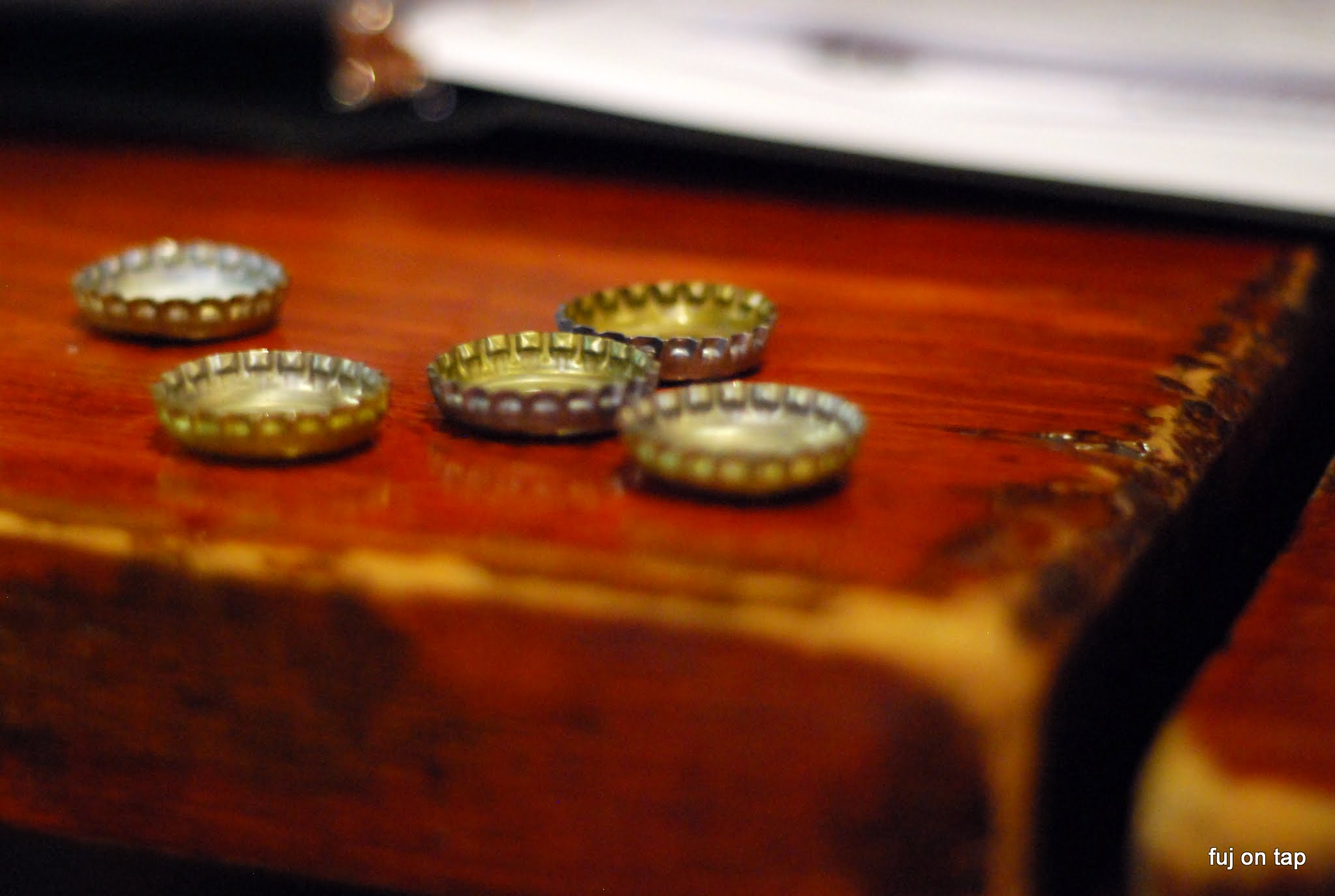 I’m sure there were plenty of these piled up at the end of the night.

Two beers really stood out for me during the day. I can’t remember which category it was but a high ABV Russian Imperial Stout that absolutely floored me. I LOVED it and would have definitely paid for that beer. The second was in the Funky Fermentables category, and it was a cream ale that had two pounds of popcorn in it. Not a style I usually enjoy, but it was a great example of the style and two pounds of popcorn was definitely an original idea that fit the category perfectly. 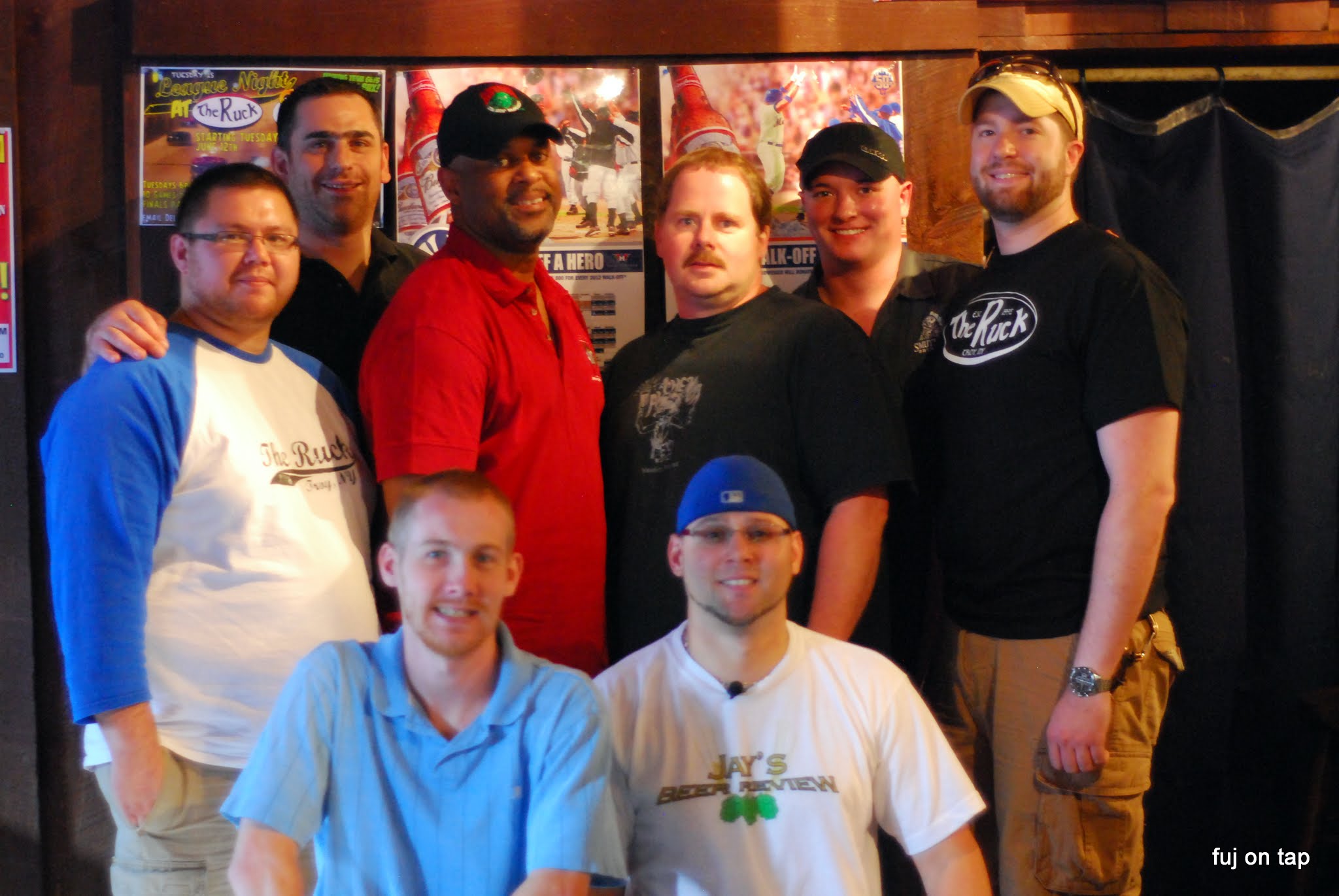 The judges, and some of The Ruck crew who put this all together.

For the The Ruck’s first competition it was done well and gives them some pointers where they need to change things next time around to make both the competitors and the judges a little happier. Overall this was an incredible experience that I was glad I got to take part in. It opened my eyes on critiquing beer not just on what I like and dislike, but how the beer is supposed to be according to the style, whether it’s my favorite style or not. Hopefully I get a chance to participate in something like this again in the future.

A bunch more pictures can be found here.

All pictures are courtesy of Elise aka SWMBO.

One thought on “The Ruck Extreme Homebrew Competition”