– Let’s chat about restaurant reviews for a sec, shall we? Now I find no enjoyment in shitting on a restaurant on my blog. Things here tend to lean towards all of the awesome places and great experiences I have on my travels all over the east coast. It’s generally a happy place. I leave the bad reviews for “place” aggregators like Google Places or Yelp and then scathingly by word of mouth to those who want to hear it. Shitting on a restaurant doesn’t benefit me as I make some pretty great contacts here, and bad press doesn’t help the restaurant, either. But, after much deliberation last night while at Druthers, there’s one person I’ve forgot about in the mix: you.

So what it comes down to is this: What is the point of this blog? It started a place for me to showcase the pictures of my budding photography hobby and to tell the story of all of the travels Elise and I have experienced. But it has also became this quick and easy place to refer to for friends, BeerAdvocate members, etc. when they ask for recommendations when they’re on travels of their own. “Oh you’re doing a day trip to or driving through [insert city]? Well I’ve been to X, Y, and Z. Check ‘em out.” With that in mind, I’d be doing all of you reading this regularly a complete disservice if I only post unicorns and rainbows around here. A bad experience can be just as informative as a good one. That said, let’s get on with my experience at Druthers last night.

I’m aware that Saratogians are well versed in bending over and taking it in the ass from restaurant pricing much more than us peons from lowly, lowly Loudonville are. And I know I don’t go to Saratoga that often, and I know we’re in the middle of track season, and I know it’s really, really easy to rape tourists on just about anything you can sell them in Saratoga, but I don’t know if you’re familiar with my blog here but I travel literally all over the god damn country going to breweries and brewpubs and have a pretty good handle on when a brewpub has their shit together and when they’re smoking crack. This was the latter. These were $4 beers (at most, more on that later) selling for $6, $8 burgers going for $12, and the coup de grâce: a $13 grilled cheese (yeah, really) and a $13 mac and cheese: 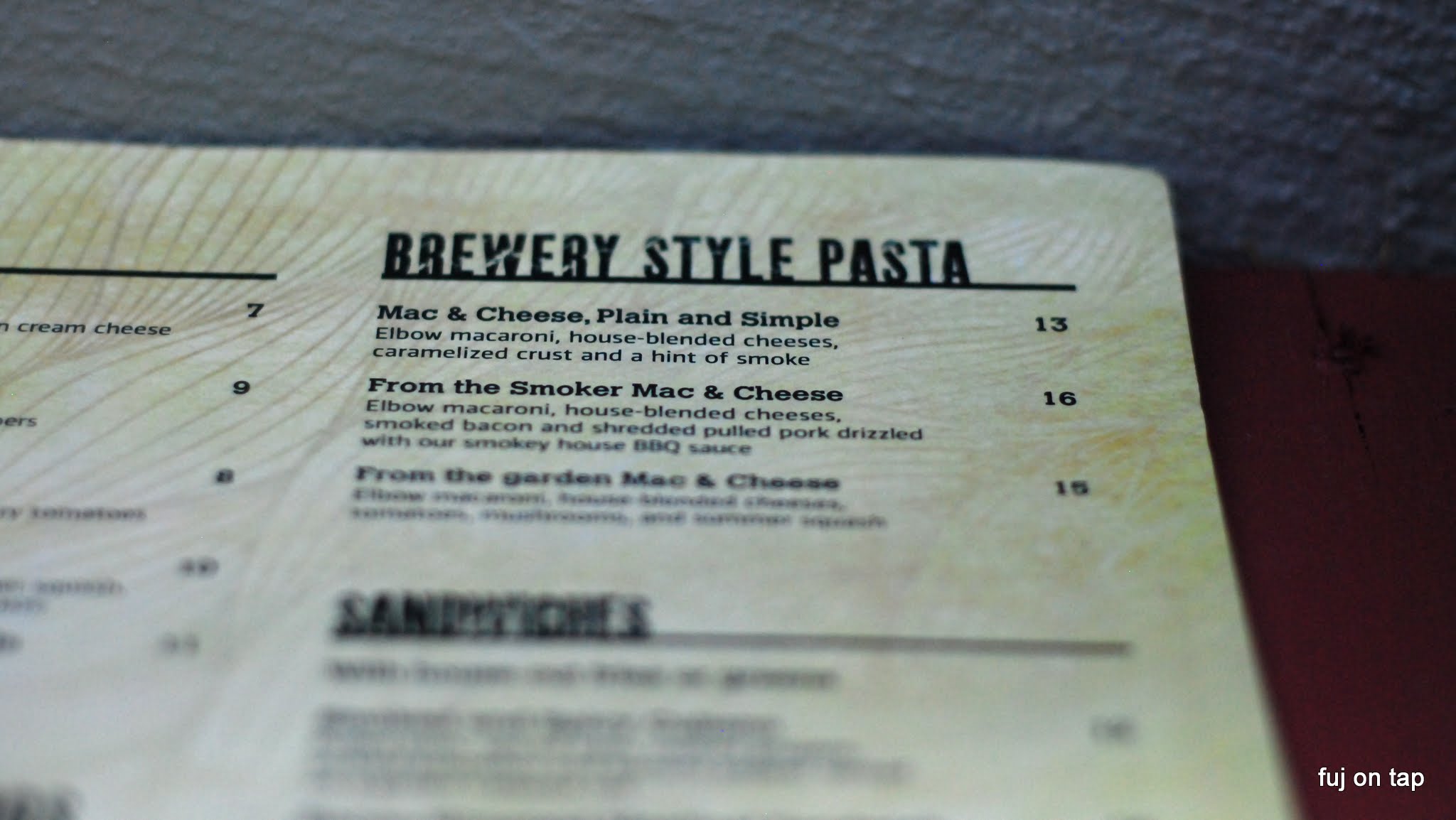 What the fuck? Honestly, these prices were offensive. Especially when you consider the portions and how bare the plates looked when they went by. We grabbed a few beers while having a really tough time deciding if there were even any dishes on the menu worth the price they were going for. It wasn’t pretty in the beer department, either.

George DePiro, formerly of the Albany Pump Station, is now the brewmaster of Druthers. I never really had a problem with the Albany Pump Station’s beers. I didn’t stay away from them like the plague like I do with Brown’s infected beers and filthy tap lines, but I never really went out of my way to get an “Oh my god the Kickass Brown is soooo good!” either. Given that the Capital District is a good craft beer vaccuum (and the main reason I drive all over the place in search of great beer) I set my expectations fairly low before heading into Druthers. It was not low enough.

I don’t mean to piss off my homebrew friends here, but let’s be honest with each other here real quick, there’s a huge fucking difference between what homebrew tastes like and what larger scale beers taste like. Brew pubs, in general, are that small stepping stone in between. Druthers beers however, straight up taste like homebrew. We tried the All-In IPA, the Simple Truth Porter, and the Brevity Wit. There’s some confusion as to whether the All-In was a pale or an IPA. Their site lists IPA, their chalkboard listed Pale. I have a better term for it: Skunk Ale. It was the kind of beer where if a homebrew friend brought it over, I’d grim and bear it and say “Hey, that’s a great start” but if I actually purchased a beer that tasted from a bottle shop like this it would be a sinkpour. As it was, the last bit I couldn’t finish ended up watering the plants.

The porter and wit weren’t much better. I only took a sip of each, but the porter tasted like your typical first time homebrewer’s porter: boring. Little too thin and watery, too. And the wit, well the wit had no carbonation, no head and no lacing.  All key features of the style. Meh: 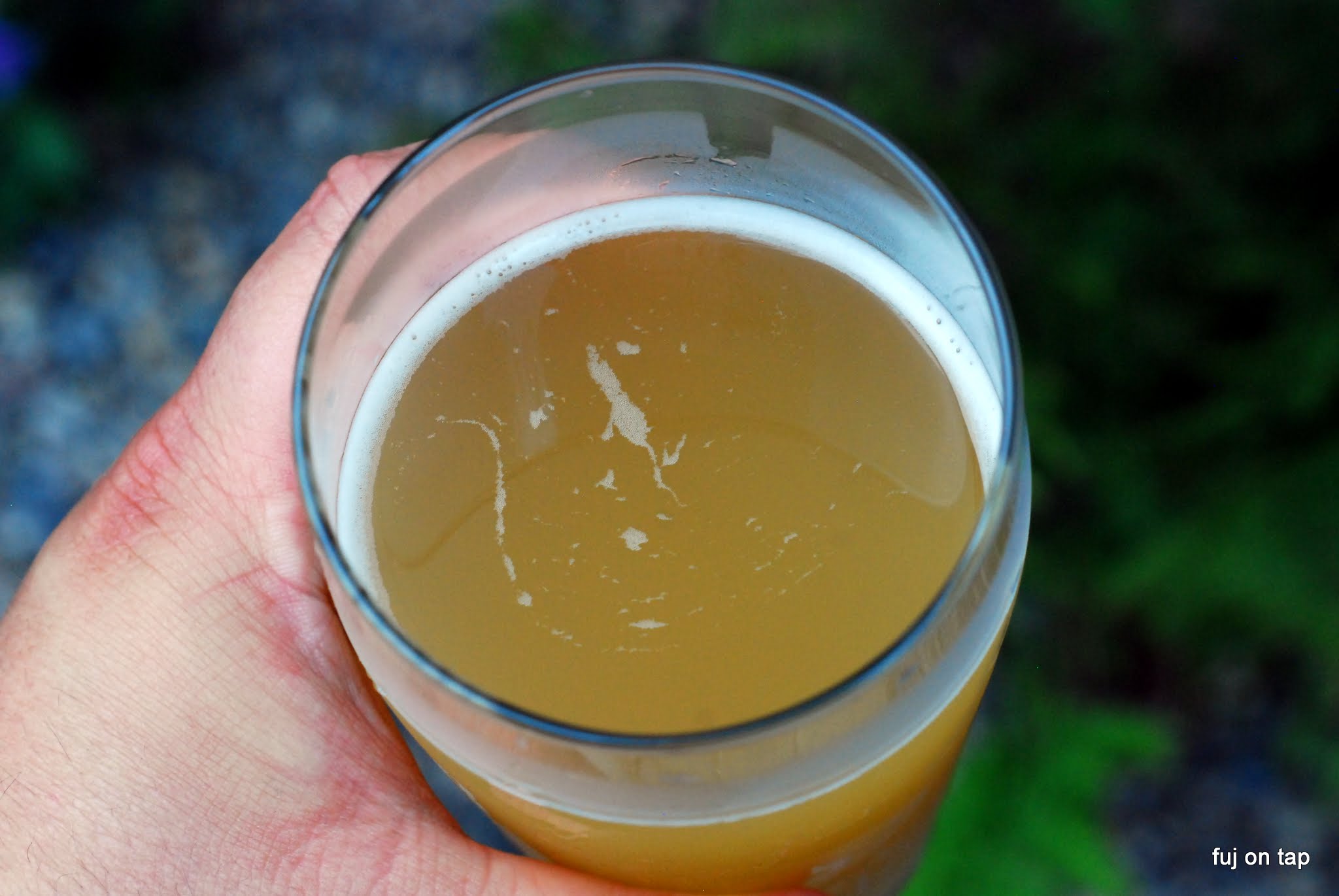 After being severely overcharged for the quality of beers we received, not really wanting to drink any more of them, and given our reservations with the pricing and value of the food menu, we walked. Better food was to be had a short stroll down the street to Hattie’s. Druthers was beautiful and it’s clear they put a lot of work into making it look like a great place to grab a pint, but they have a lot of work cut out for them, and a lot of improvements to be made before we make the trek up there again or recommend the place to any of you guys.