– We arrived at Armsby Abbey about 45 minutes early (due to my superb driving skills, obv) so we had some time to kill before the dinner started. Given that it was the Armby’s 4th Anniversary, they had some killer beers on tap that I wouldn’t have gotten my hands on otherwise, and while we were there for the Hill Farmstead Dinner, I couldn’t help but grab some Cantillon Single Barrel Lambic #1, 2009 Lou Pepe Kriek, and Cambridge Brewing Company Ozymandias. It goes without saying, but they would not have sat on these kegs and waited to open them for their Anniversary unless they were absolutely fantastic, which they all were. 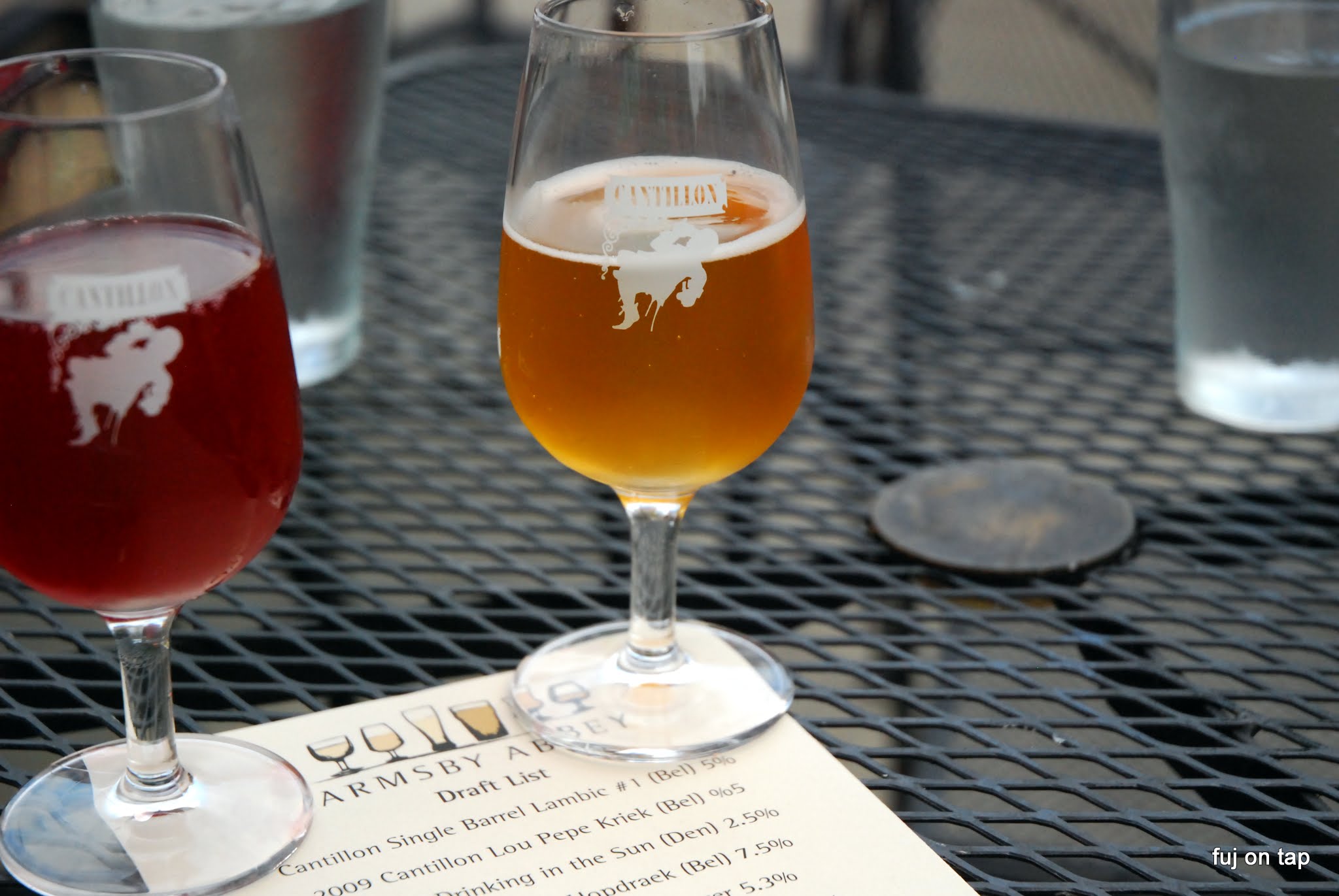 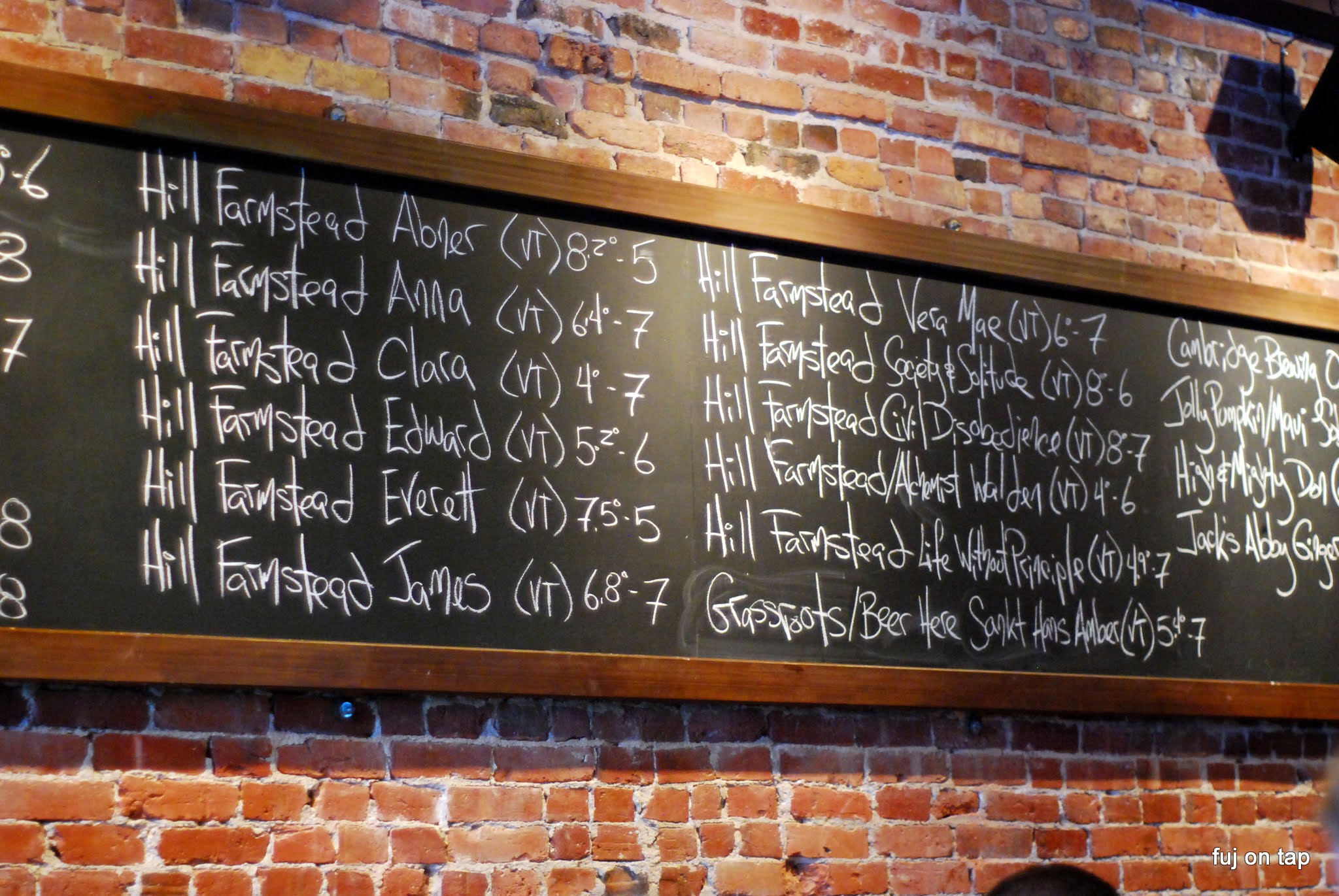 I was allowed in a few minutes early to take a few pictures of the plates for reception. Dishes lined the center of the restaurant filled with Willoughby, Clothbound Cheddar, Landaff & Weybridge cheeses all aged at the Cellars of Jasper Hill (whom I’ve recently just discovered and want to check out on our next trip to Greensboro) and Fruits from Fresh Tougas Farm paired with the Hill Farmstead and The Alchemist collaboration Walden. The cheeses were perfect to get my palate back into gear after the super sweet and tartness from the pre-dinner libations. I missed out on Walden due to my lack of attendance at the Vermont Brewers Festival so I was glad to get my hands on some at the Armsby. Crisp, light, refreshing, extremely sessionable blonde ale with a lot of hop character. This an easy sippin’-on-all-day kinda beer. 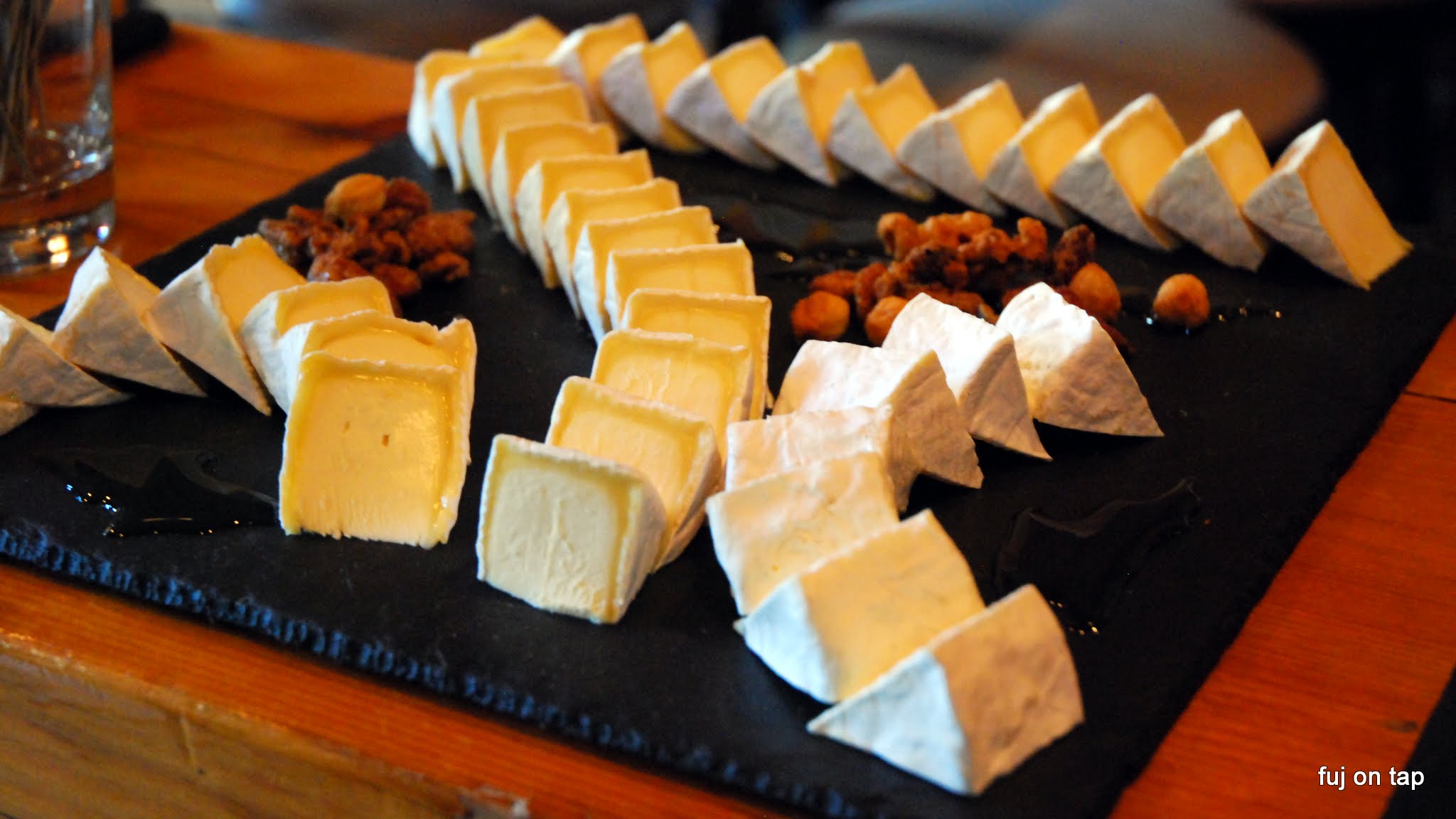 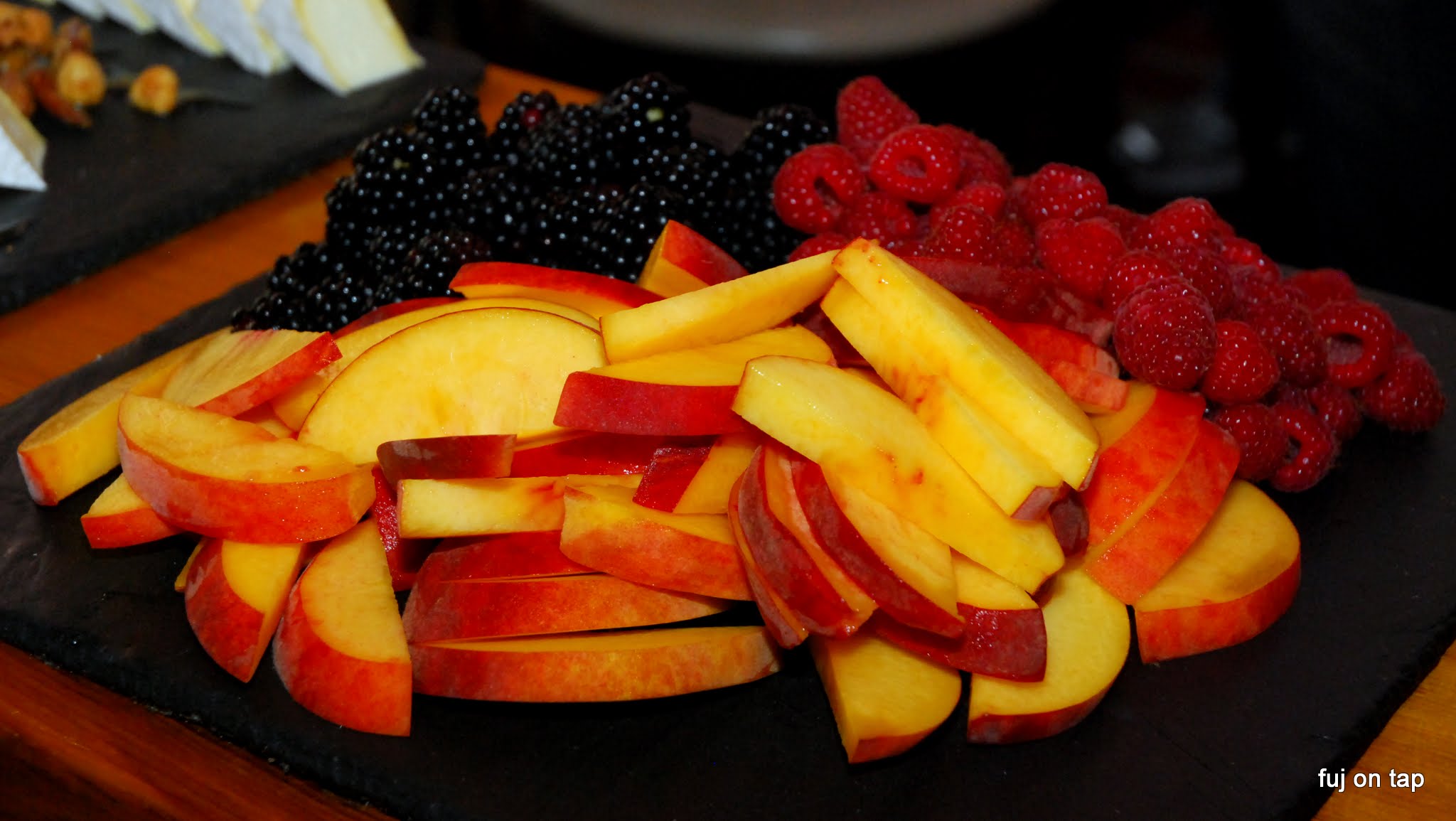 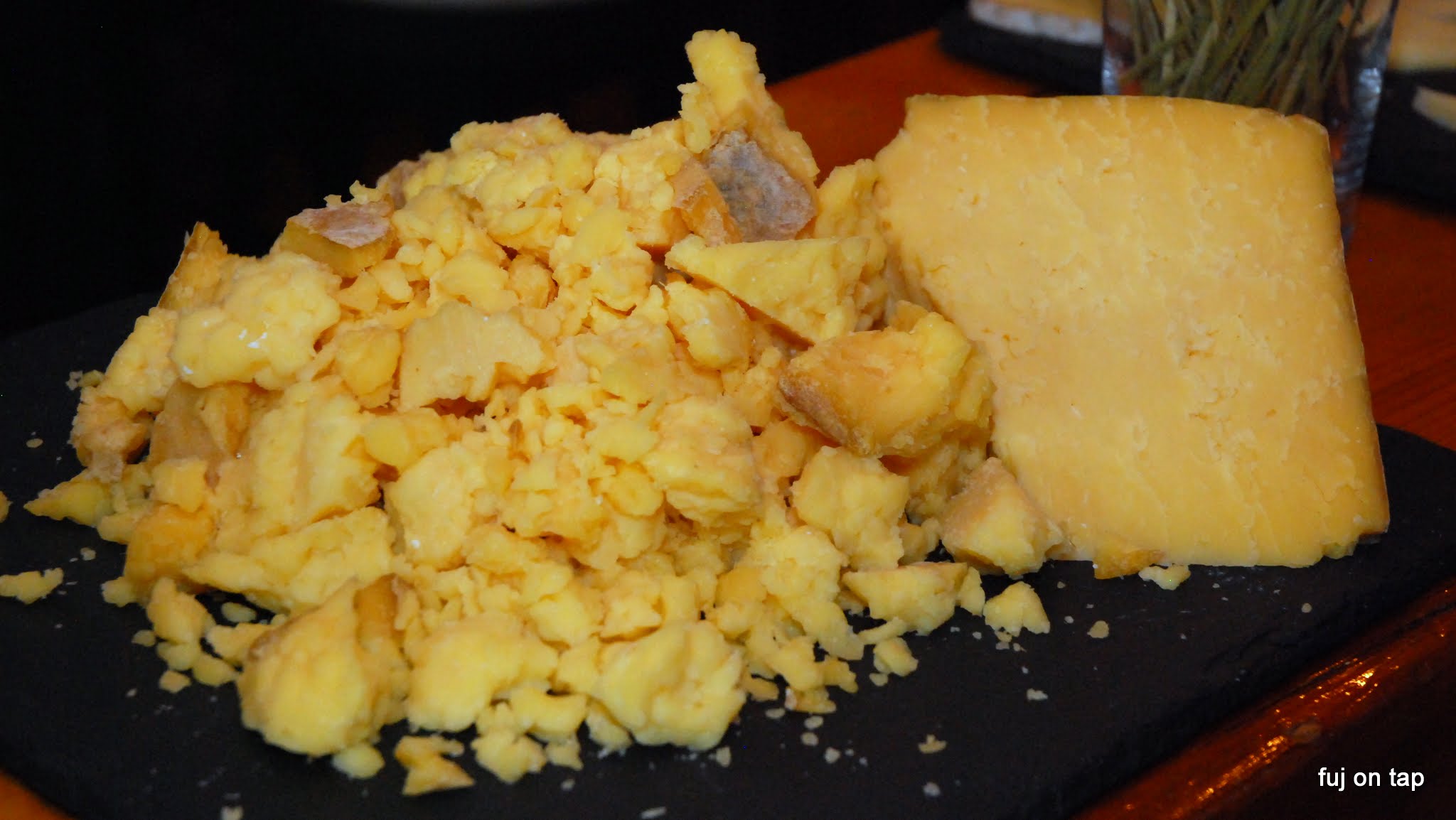 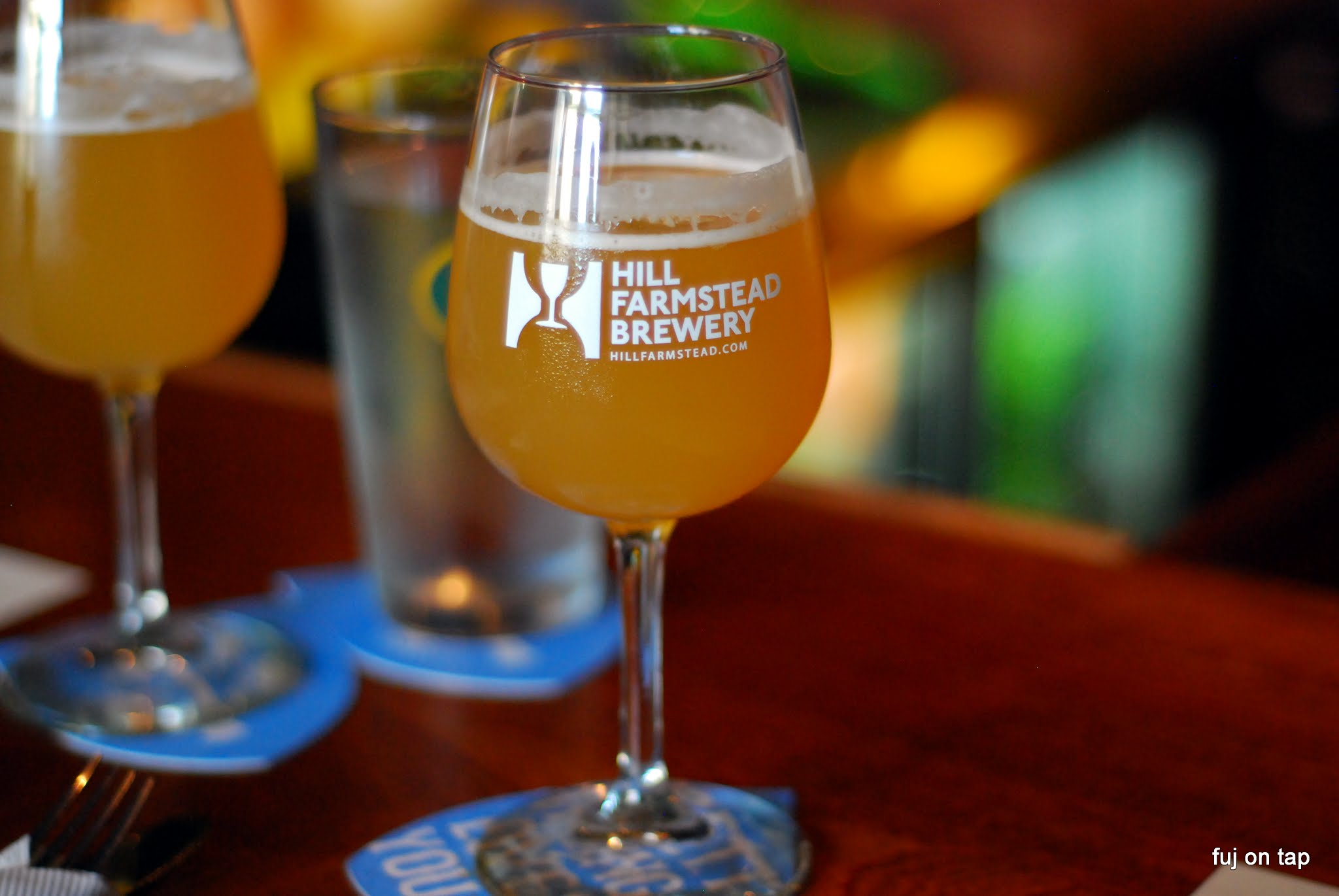 The next course was a Charcuterie slate served family style with Smoked Beef Tongue, Rabbit Terrine, Chicken Liver Pate, and Head Cheese with Caraway-Bacon Braised Cabbage, Nectarine Mostarda, Pickled Shallots, and Crostini accoutrements paired with Hill Farmstead Vera Mae. The real standout on this plate was the Smoke Beef Tongue. Honestly if you didn’t know it was tongue you would have just thought it was oddly small slices of pastrami. Absolutely delicious. Vera Mae was the first of the many saisons we were going to have through the night. Made with some local Vermont ingredients including dandelions gathered on the farmstead (I’m not sure who Shaun gets to volunteer to harvest local dandelions but I would kill for the opportunity to help out with the making of this beer). Light, herbal and citrusy: a perfect summer beer. 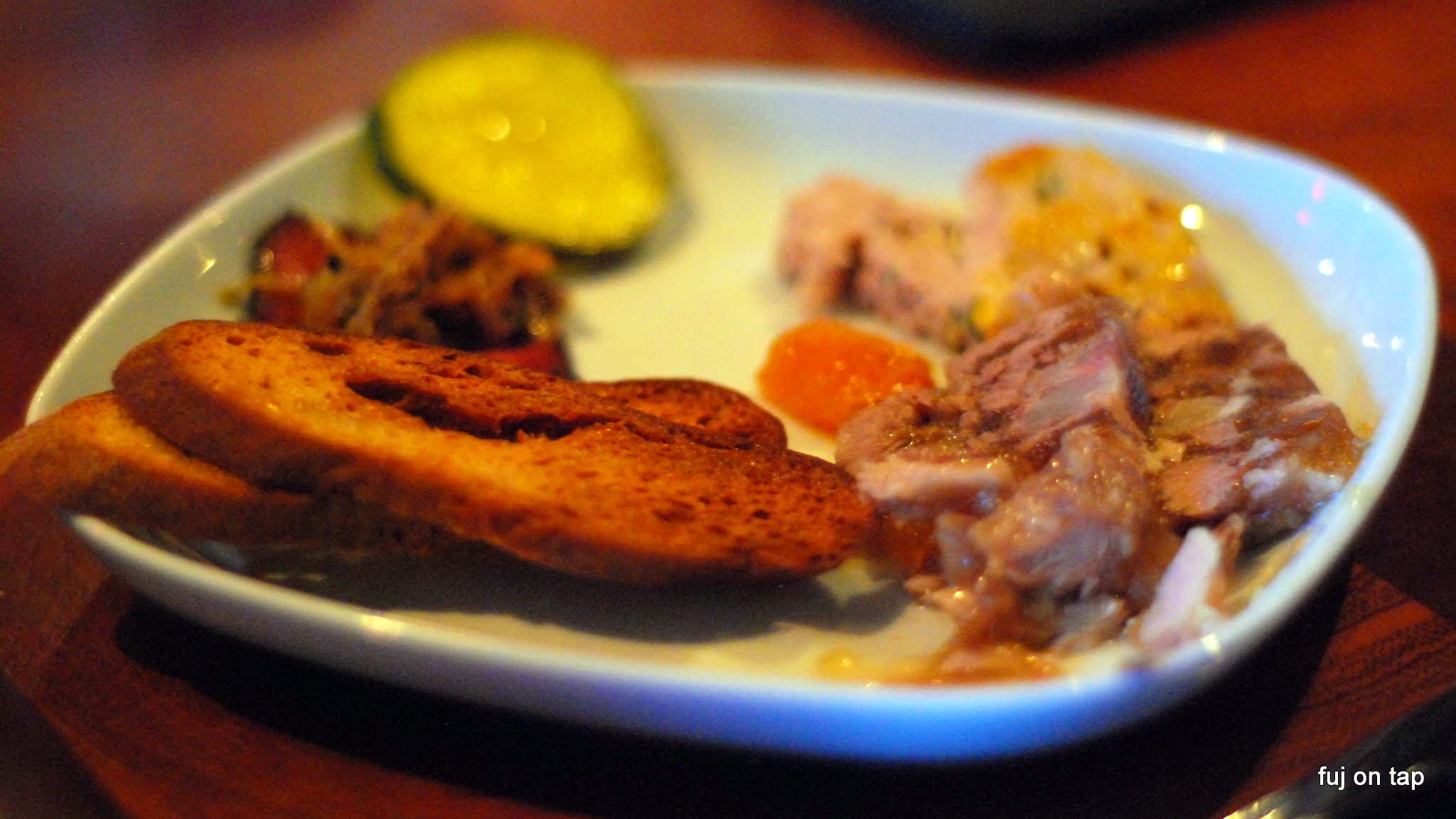 We moved on to the Watermelon Carpaccio which was made with Compressed Watermelon, Queso Fresco, Shaved Jalapeño, Cumin Oil, Lime Salt, and Cilantro paired with Hill Farmstead Edward. This was really interesting because the watermelon took on the appearance of thinly sliced ahi tuna. It was packed with watermelon flavor, but what stole the show for me on this plate was the jalapenos (I’ve told you guys before I’m a little of a chili head). While the jalapeno was present the spice was missing and it was a little confusing to my taste buds and I believe that’s exactly what the chef intended. The jalapeno flavor stood out, but none of the heat. Very interesting indeed. The way Edward (named after Shaun’s grandfather) was presented is a perfect example of how the night was not just about the food and not just about the beer, but was also filled with great story telling from both Shaun Hill and Alec Lopez, both of whom got up before each course to tell the guests a little bit about what they were about to partake in. Edward was much more hopped up than the previous two beers, with just slight hints of citrus and pine, but still just as sessionable. Shaun described this as a “desert island” beer that could be drank all day. I tend to agree. 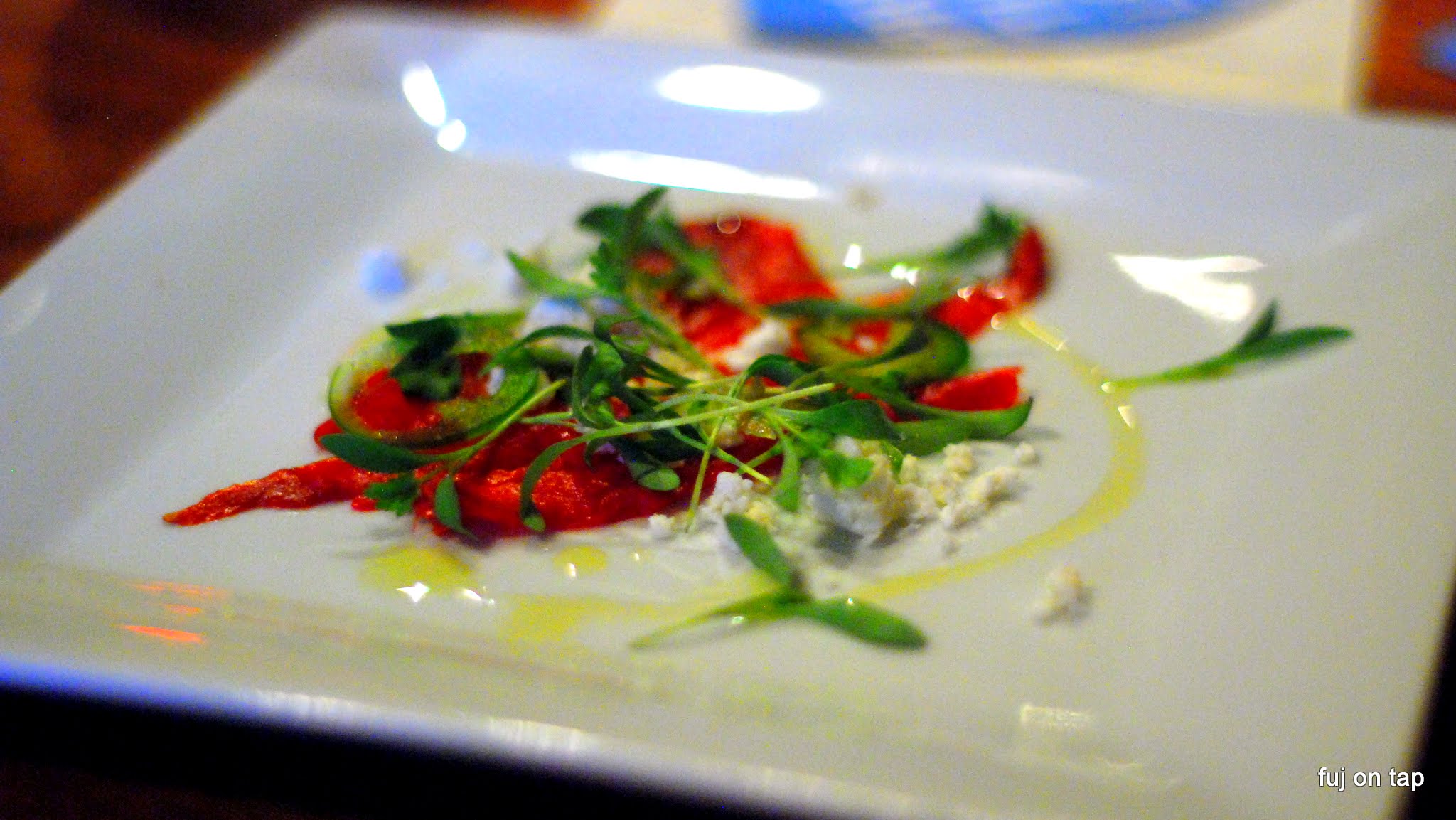 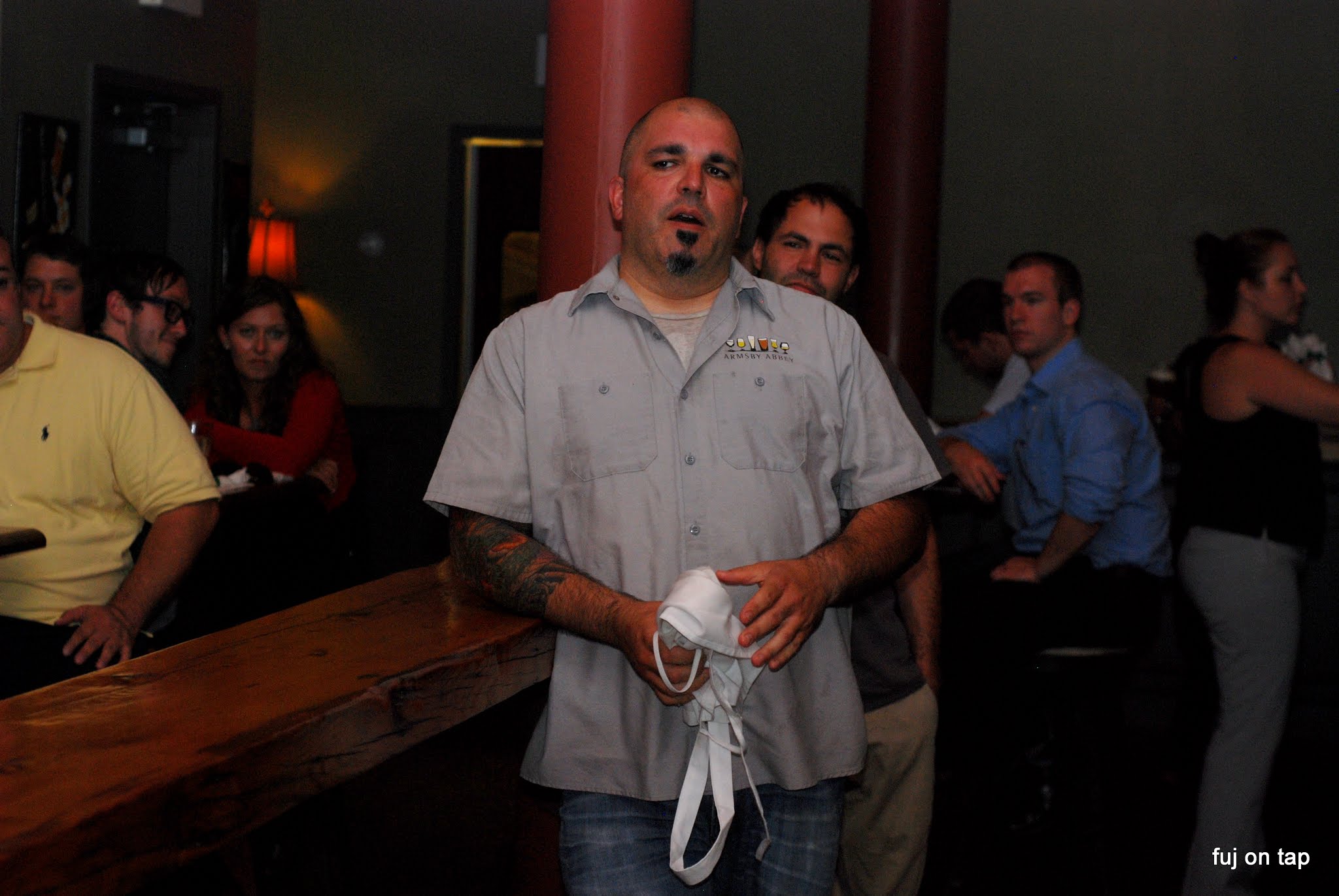 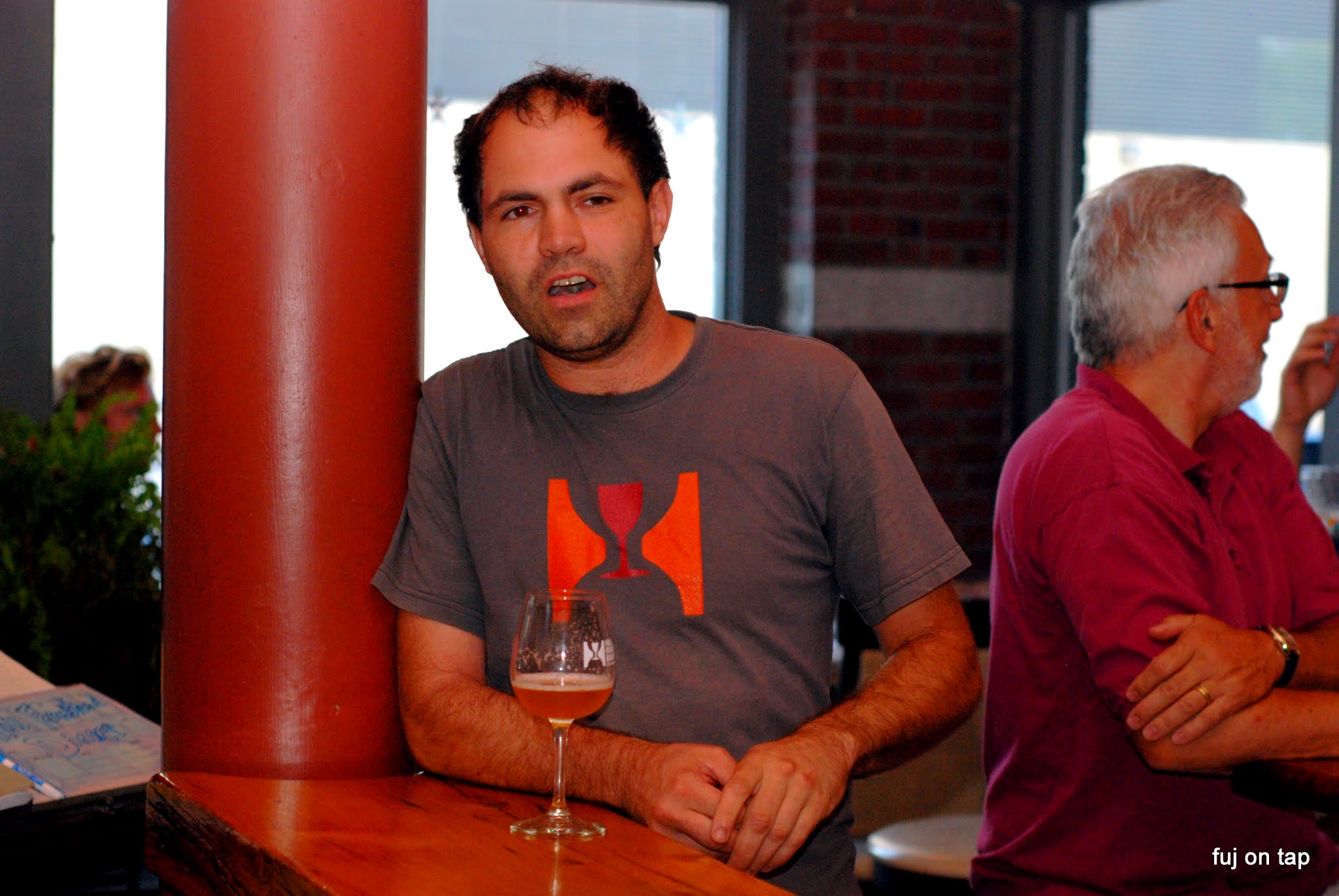 The next course was Heirloom Tomato Gazpacho made with Heirloom Tomato, Charred Octopus, Fried Pig Ear, Serrano Oil, and Chervil paired with Hill Farmstead E. Like I’ve said on Beer Advocate, any of the “weird” foods that were on the menu were all presented in a way that was very approachable for all of those leery in trying it. The octopus went down extremely easy, and the fried pig ear was like a tasty, crispy pork rind with a soft center. Nothing too scary here. E. is the farmhouse version of Edward and it adds a really nice refreshing tartness and funk from the Brett. It’s not in your face, Sour Patch Kid tartness but just enough for you know it’s there with some hop notes still present and some very nice lacing. The combination works extremely well. Very drinkable like all of Hill Farmstead’s beer. 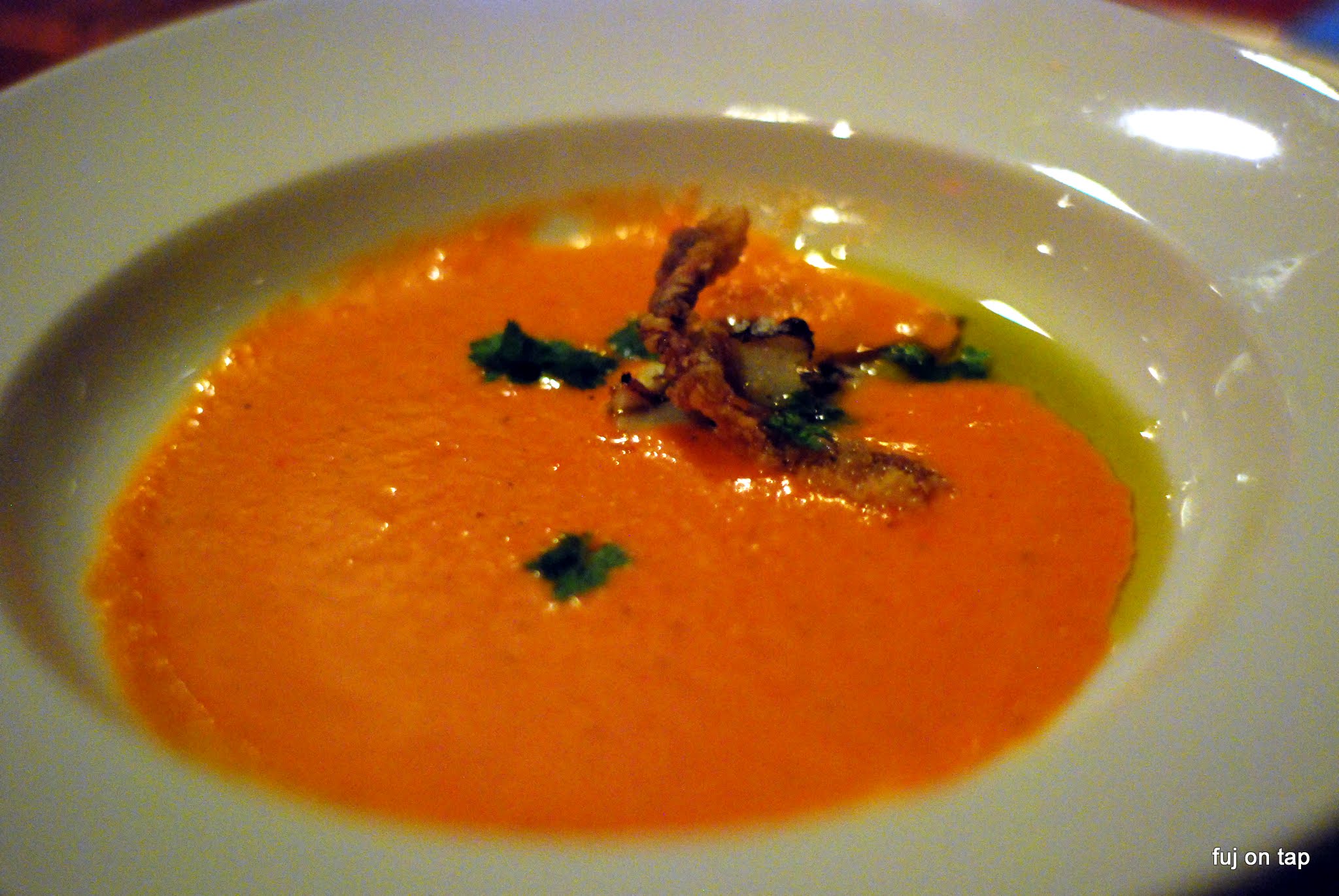 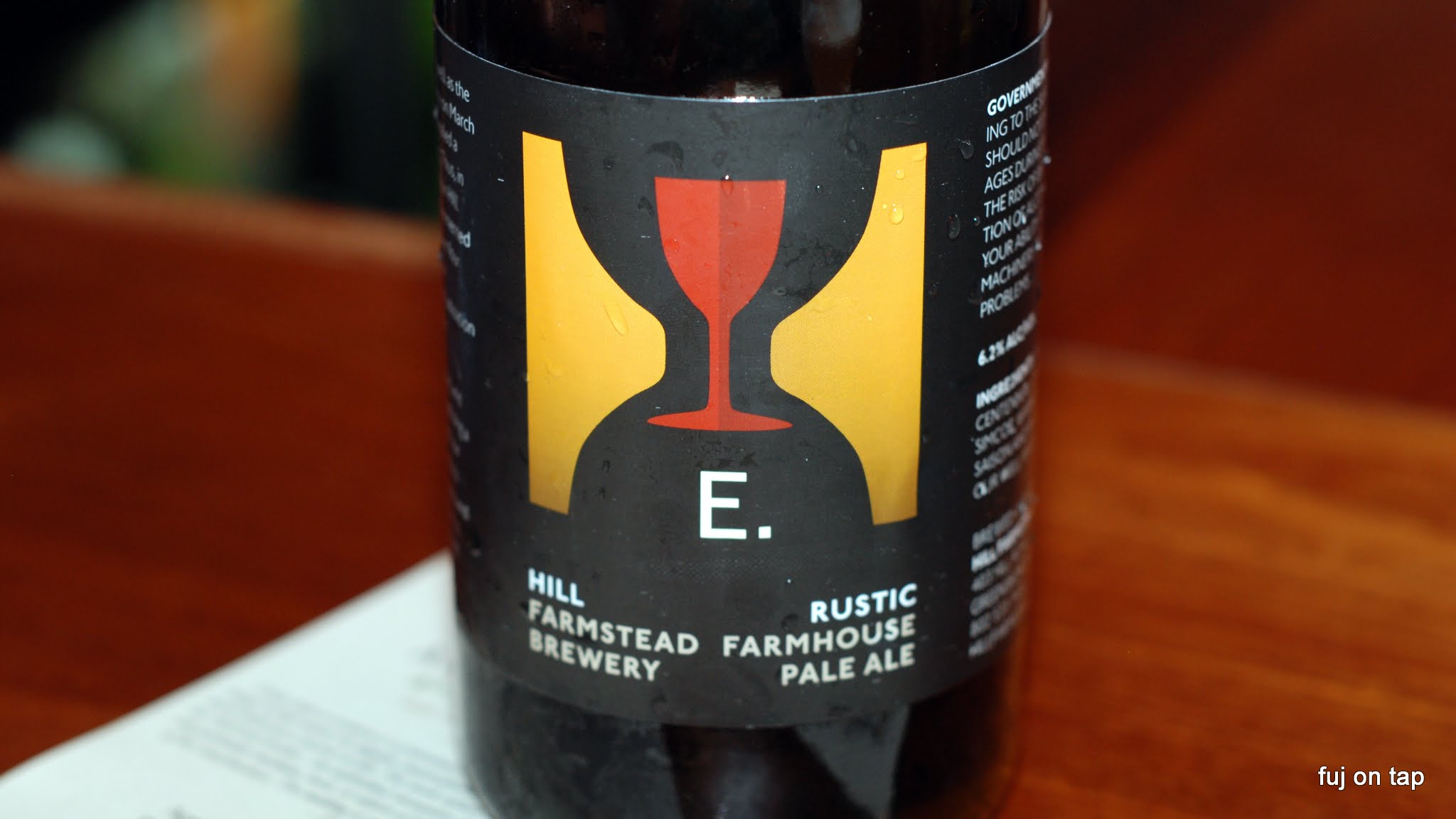 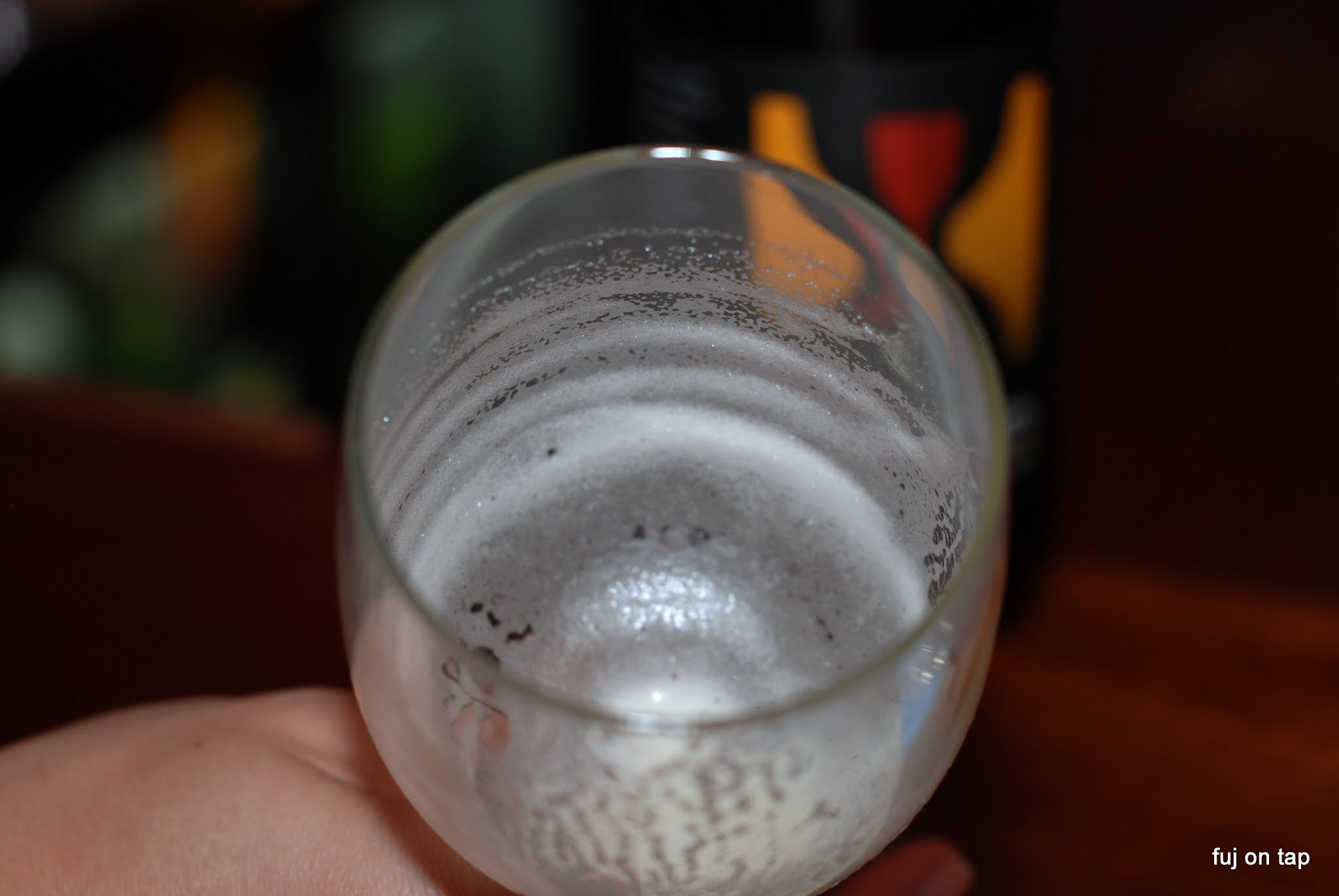 The Crispy Veal Sweetbreads were served with Squash Puree, Sweet Corn, Foraged Mushrooms, Cultured Goat Butter, Parmigiano Reggiano, Lemon, and Espelette paired with Hill Farmstead Art. They were absolutely the highlight of the dinner for me. Just thinking about them as I write this is making my mouth water. Again, some might be unsettled by the thought of sweetbreads but the crunchy fry of the breading and the pungent parm worked perfectly for the first-timer. I was stealing some off of Elise’s plate by the time mine were gone. Amazing. Art is without a doubt one of the best saisons I’ve ever had. Tart and citrusy, a bit of pepper with the wine barrel aging adding a bit of sweetness. 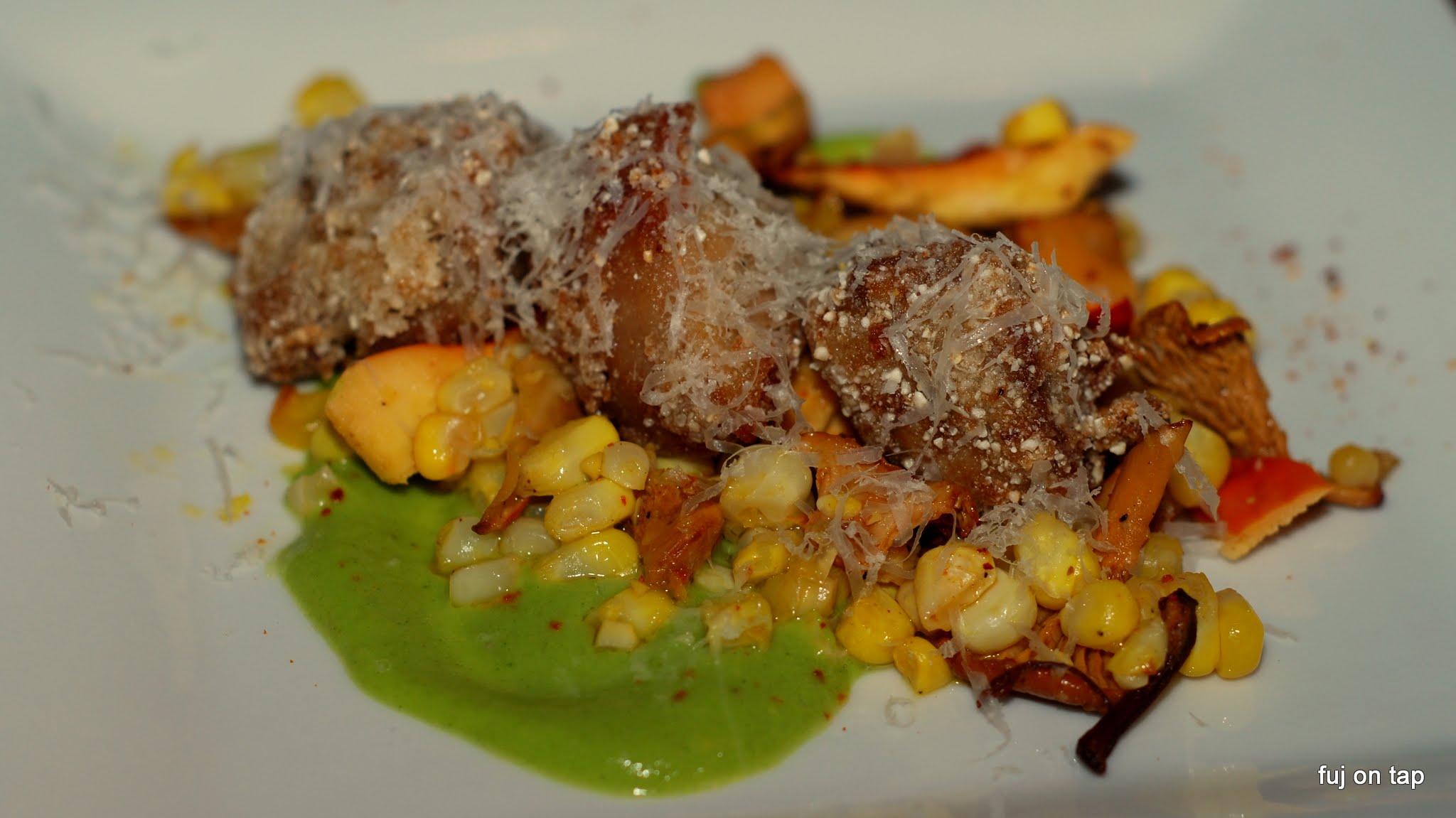 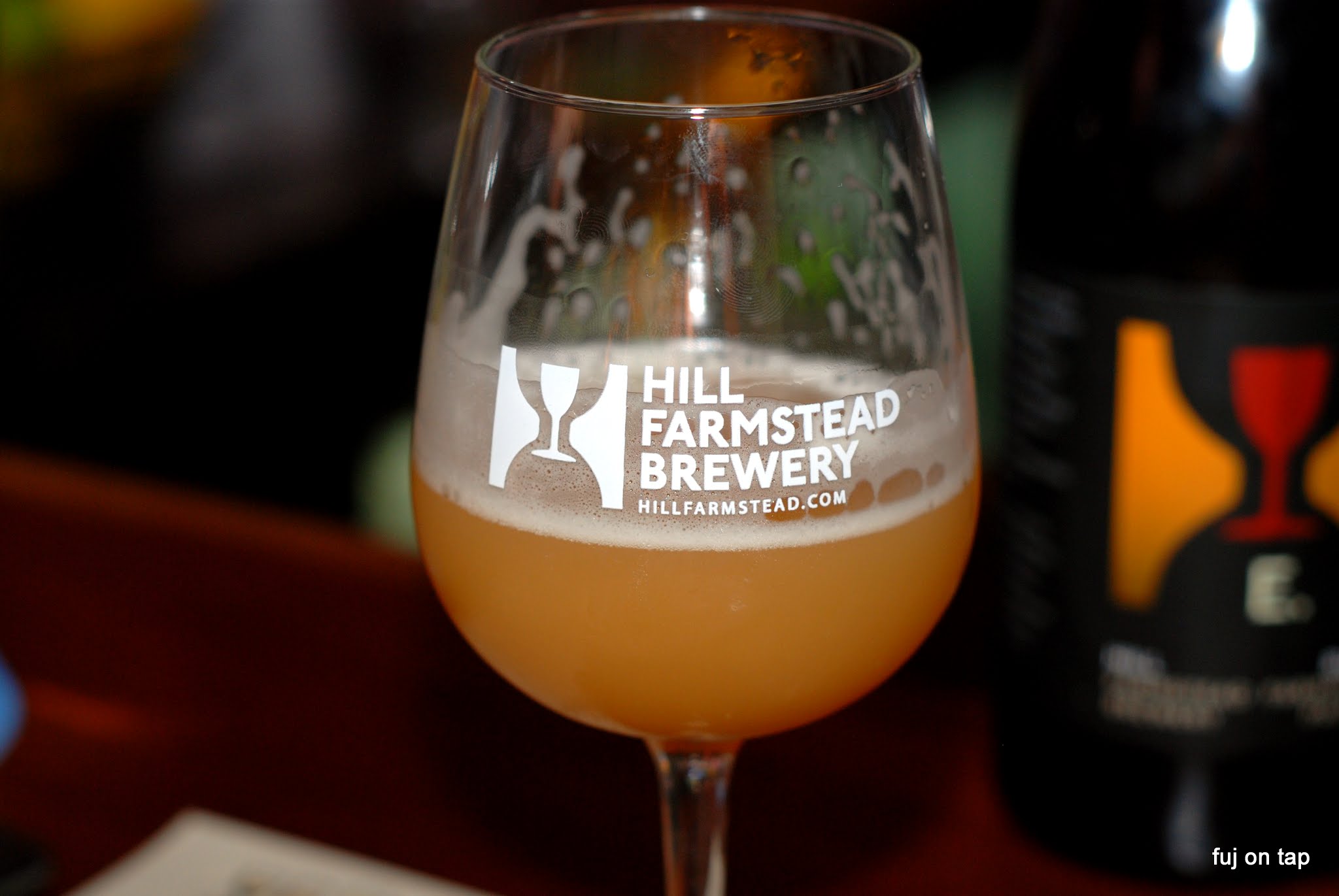 Intermezzo consisted of Woodbury Wellfleet Oysters with Corn Foam, Creme Fraiche, and Chive served family style. I’ll admit, I’m a little bit of a wiener when it comes to bivalve molluscs. Oysters, clams, and mussels all kinda sketch me out a bit. But recently, especially with the few Belgian beer-focused restaurants opening up in Upstate NY, I’ve been exposed to these more and more. I doubt I’m going to go out of my way to order a big bowl of beer-steamed mussels any time soon, but when offered to me I’m no longer going to run away screaming like a little girl. Progress! 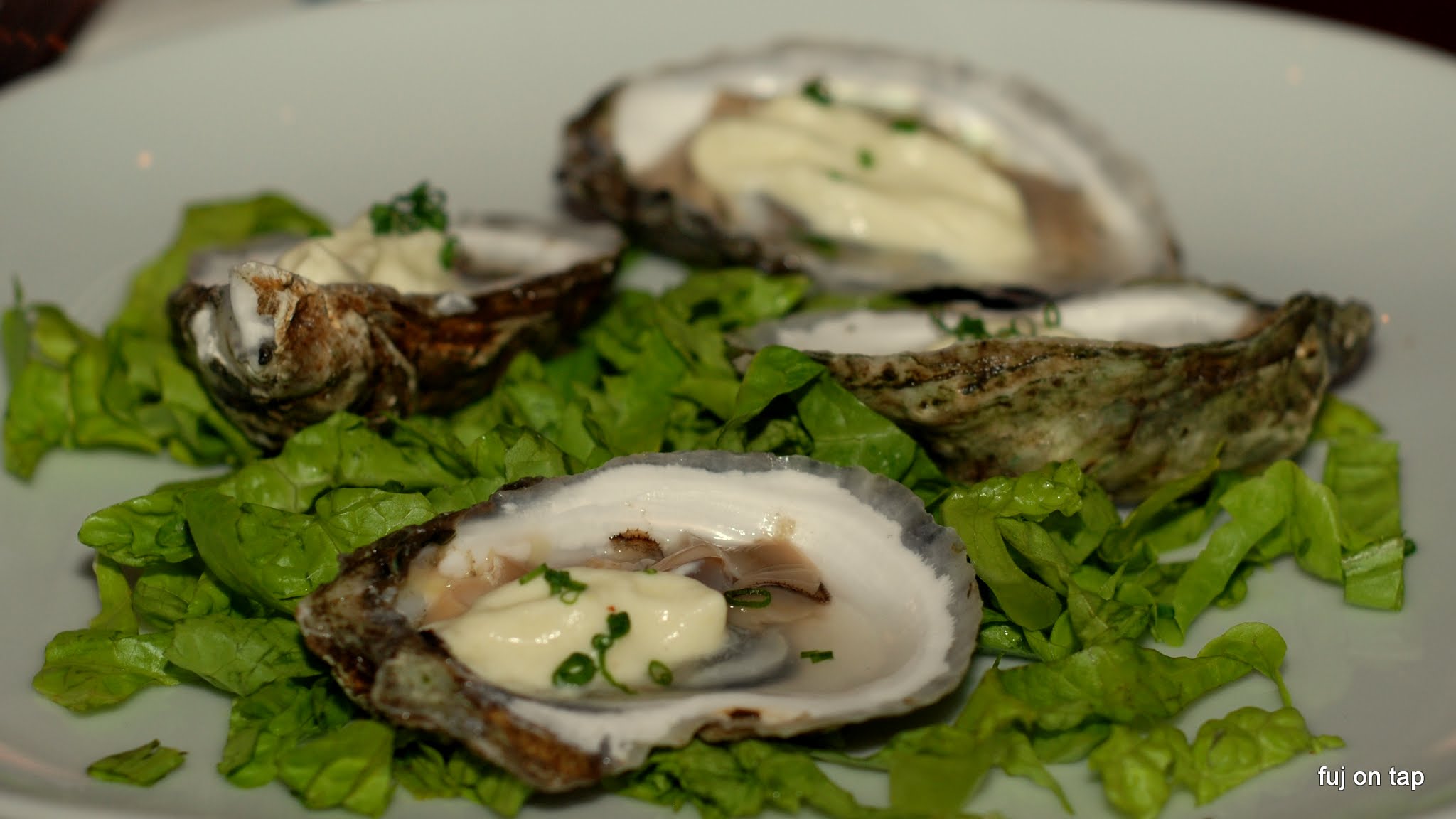 We moved on to one of my absolute favorite ingredients in food: Pork belly. The Pork Rillon was served with Stone Fruit Chutney, Onion Soubise, Preserved Lemon, and Bitter Green paired with Hill Farmstead Society and Solitude #4. I realize that rillon is supposed to be served as a snack or a side, but I would handily eat an entire dinner of these porky morsels. I brought a growler of Society and Solitude #4 home from my visit to Hill Farmstead back in July and later cracked it open with a few other Vermont DIPAs. If you’ve been following the blog at all you know my love of Vermont DIPAs and specifically Hill Farmstead, so there’s not much more to say here other than it was exceptional. 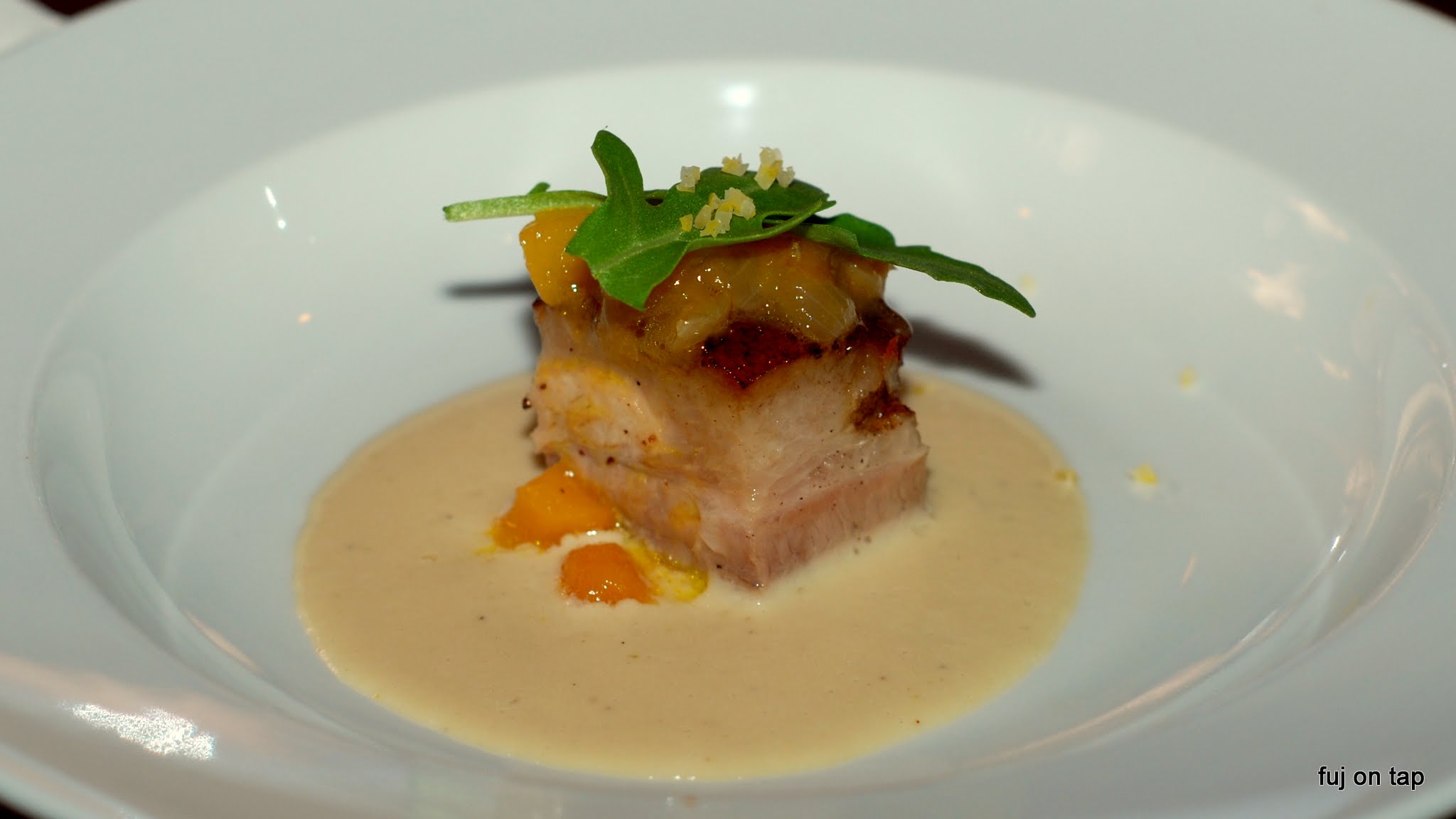 Okay, the next course is the one that’s garnered the most controversy: Lamb Brain Ravioli. There was only one ravioli on the plate and it was kinda hidden under the Confit Lamb Shoulder, Pulled Eggplant, Fire Roasted Peppers, Charred Tomato Puree, and Salsa Verde paired with Hill Farmstead Civil Disobedience #4. So while it was the most intriguing part of the dish (possibly the night) the course was not completely lost if lamb brain wasn’t your thing. Due to lack of brain, some sweetbreads were mixed in so we could all get some. It really wasn’t as big of a deal as everyone was making it out today, and I enjoyed being able to cross “lamb brain” off of my food bucket list. The pulled lamb shoulder was fantastic, albeit this late in the evening we were all starting to feel a bit full. This paired perfectly with the dark Civil Disobedience #4, which while saison, was black with a cream colored head and a bit of a funk reminiscent of a (slight) sour ale. 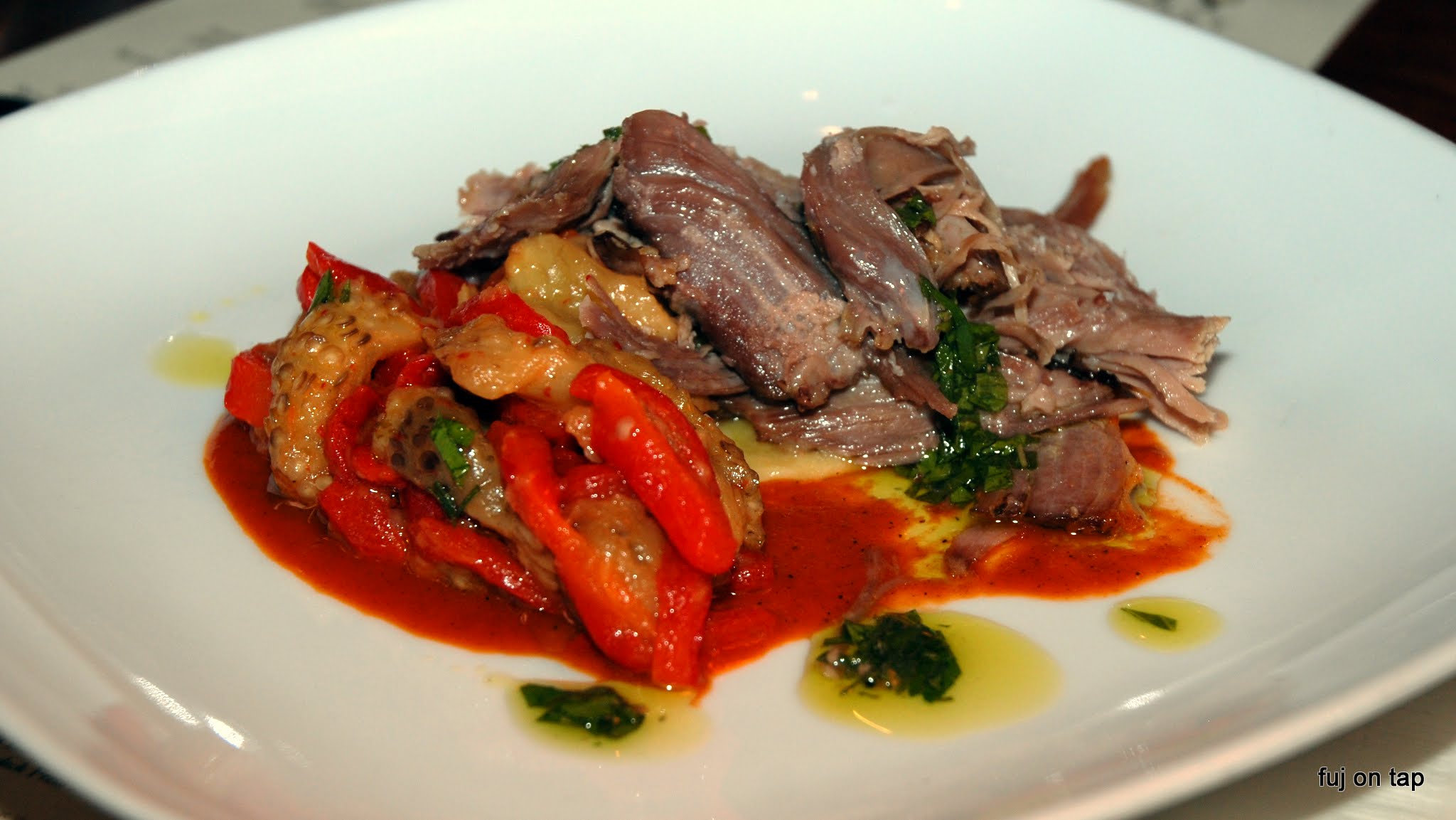 The night ended with a bonus course of Fois Gras and Peach Gastrique served on Crostini followed by Champagne Poached Peach with Lavender Pound Cake with a Honey-Peach Reduction and Lemon Cream paired with Hill Farmstead Anna. Anna had some honey and citrus notes, with a slight bit of graininess and a bit of farmhouse funk, which paired perfectly with dessert. Sadly, as we were able to bring the Hill Farmstead wine glasses home with us, I saw a few guests pour their glasses of Anna out so they could rinse and get on their way. This was a long night, and those people might have been over full or worried about driving, but man what a fucking shame. 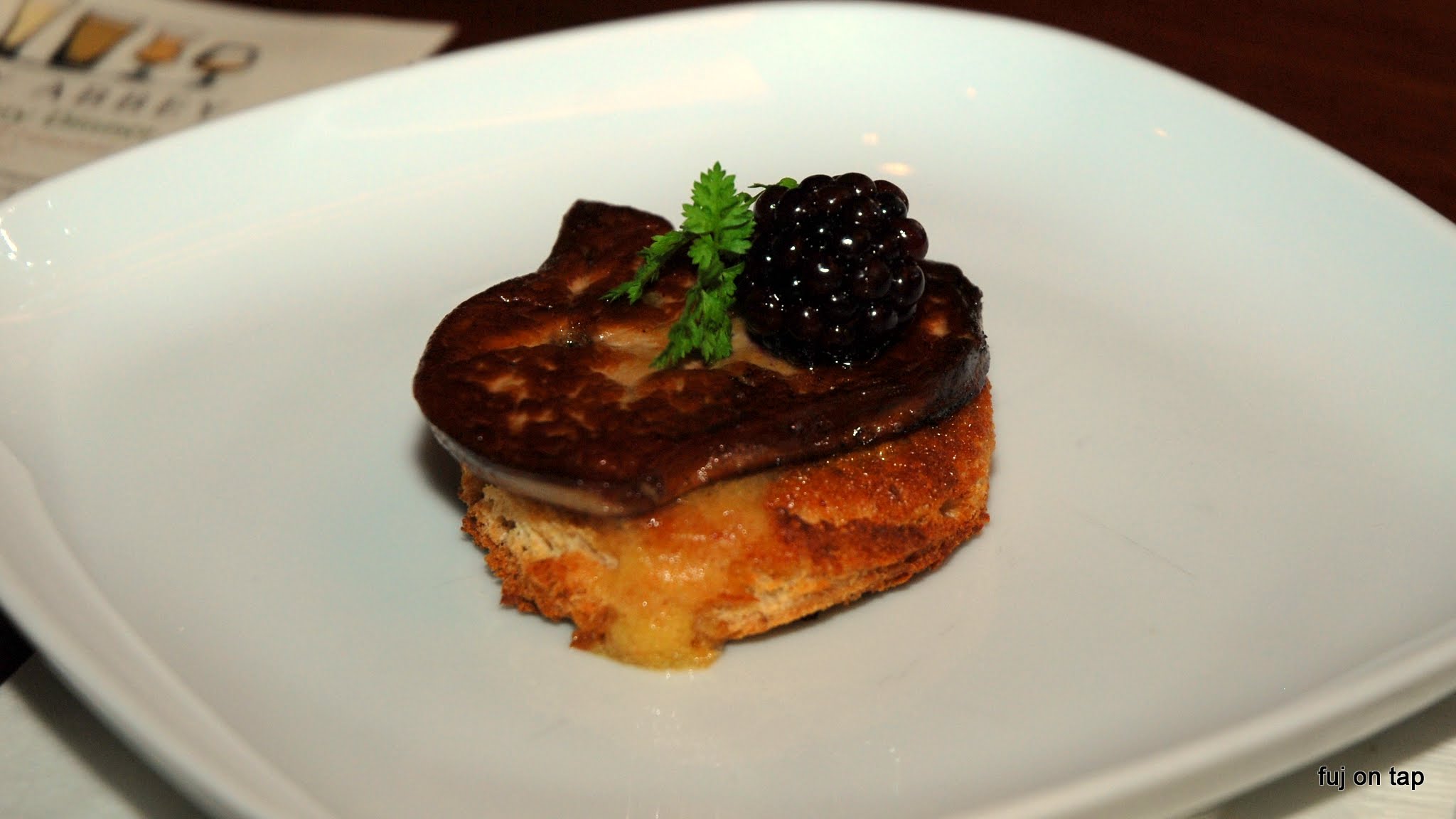 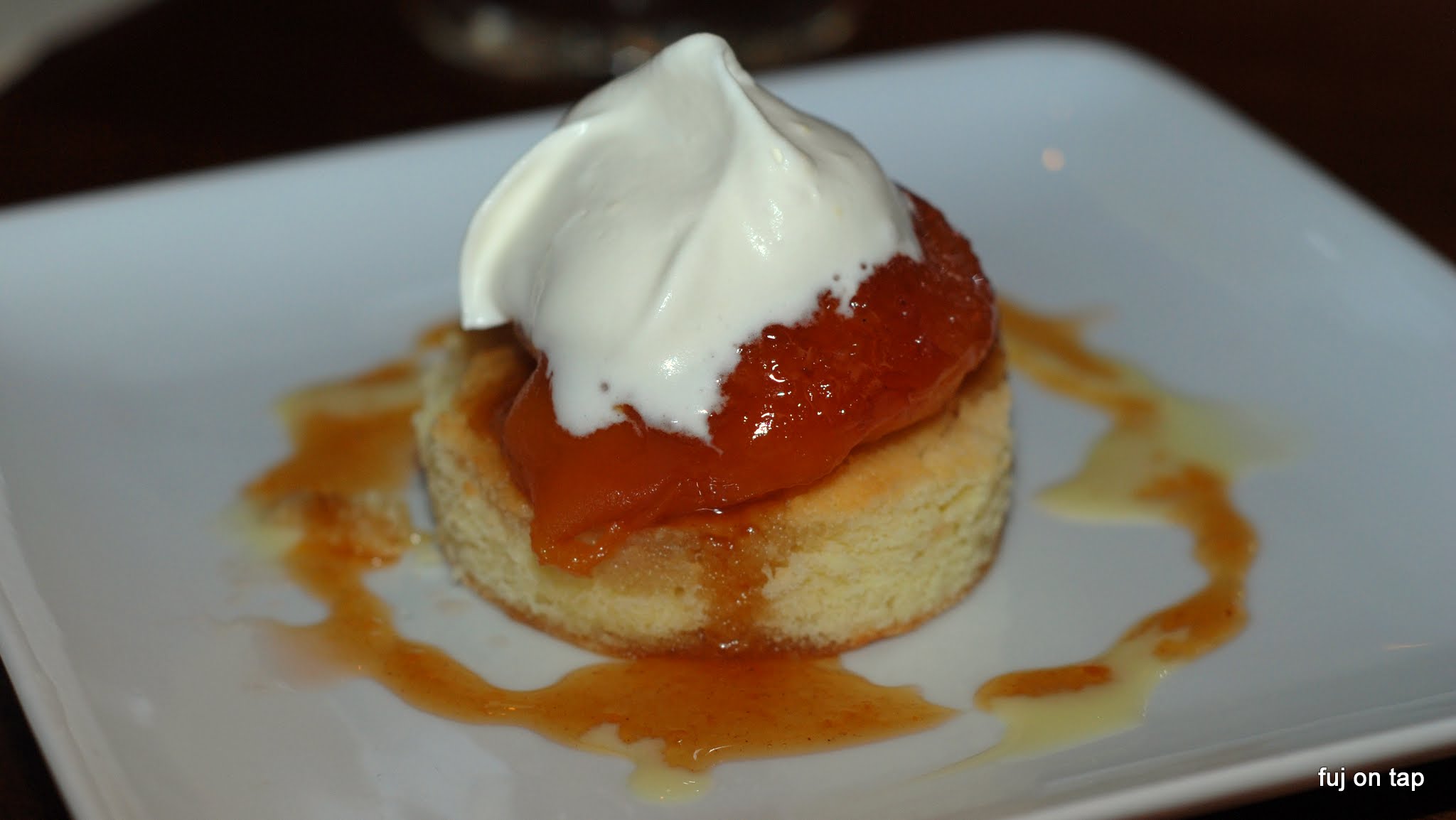 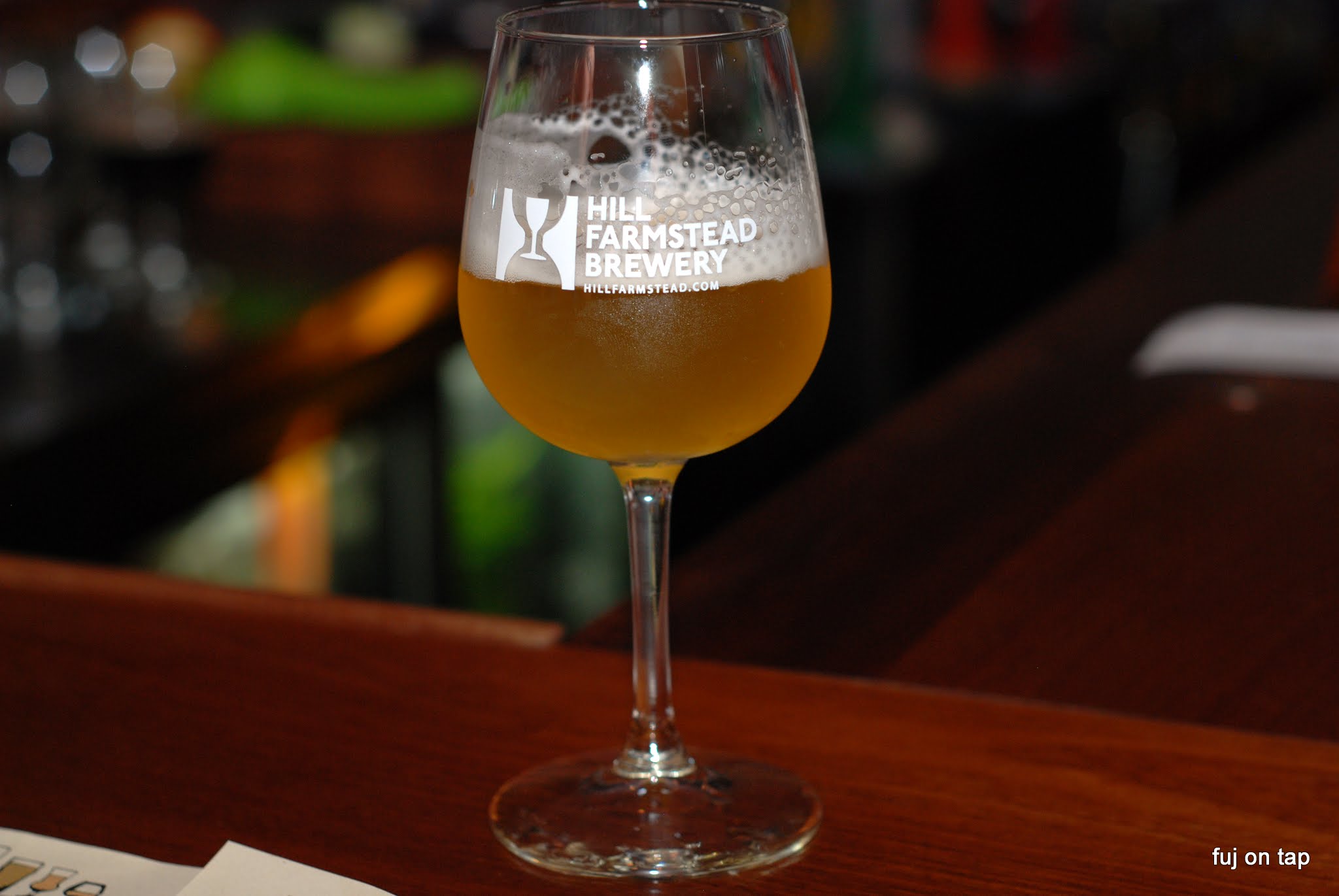 As I’ve said on Facebook and BeerAdvocate, this was without a doubt the best dinning experience I’ve ever had, both from the food and beer perspective. Where else can you get this combination of insanely good beers paired with outstanding dishes that make you eat something just out of your comfort zone? No where. I look forward to Shaun and Alec’s next venture with great anticipation.