The other day I ventured into a brewpub that I really haven’t frequented much in the past few years: Brown’s Brewing Co. Between the maturation of my palate, the degradation of quality of Brown’s beers, plus a menu that has not so gracefully been balancing a thin line between pub food and upscale gastropub, Brown’s has been kind of a mess of the past few years and offered nothing worth making a visit save maybe an event or two. Even the last one of those I went to a few years ago, the Firehouse Chili Cook-Off, was a complete disaster and I hadn’t been back since.

Granted, back when I used to frequent Brown’s, it was a simpler time. I had much less respect for beer and Brown’s was a place to head after class, grab a pint, hang out on the weekends upstairs undisturbed (ya know, before they had wait service there and before they kicked you out if you weren’t ordering food). A stop at Ryan’s Wake filled with a least ten plays of Journey’s “Don’t Stop Believing” always followed (this was before the digital jukebox days), closing time there always preceded drunkenly walking to The Ruck, and getting kicked out of there meant it was time for a couple of slices over at I Love, the best pizza EVER (when you’re shitfaced). A typical “that side of the river” HVCC Super Senior weekend excursion.

That said, things have changed greatly over the past 10+ years. Between Brown’s and Revolution Hall there have been enough owner, brewer and chef changes it’s hard to keep track of it all. And with that came several overhauls of their menus. They’ve expanded their brewing capacity, moved some (or more) of their brewing to their Walloomsac Brewery and are concentrating much more on getting their beers on the shelves on every Price Chopper in the Northeast instead of concerning themselves with the quality of their brew, which has drastically took a turn for the worse.

Or maybe they haven’t. Maybe their beer hasn’t changed. Maybe the thousands of different beers I’ve had over the years has caused me to move on and grow past Brown’s (and Davidson Brothers’ and Albany Pump Station’s, and Druthers) level of brews. Doubtful given that these breweries are the butt of so many jokes in the Capital Region craft beer community, but who knows.

A friend of mine with whom I go back and forth about the quality of Brown’s beers, cleanliness of their tap lines, etc. (just to provoke me) posted the announcement of Brown’s Imperial Stout being tapped on my Facebook wall. Given that when I started going to Brown’s (a decade ago or so) their Imperial Stout was a year round offering, I was taken aback when I saw they were making a big fucking deal out of this beer as if it was the next coming of Kate the Great. Challenge accepted.

I went into Brown’s with the lowest of expectations, and surprisingly, they were exceeded. I didn’t love this beer. But it also wasn’t the worst beer I’ve ever had, either. This was about as good as any homebrew Imperial Stout. It was really one-sided with a lot of intense bitter notes from the excess of roasted malts used in the beer, and nothing else. No chocolate, no coffee, no complexity. They somehow managed to make it have a thin mouthfeel, too, which was quite a feat given the ingredients. It was boozy as fuck, with nothing even bothering to try to hide that 10.2% ABV either. It was rough, and seemed unfinished. That said, I was able to empty my glass, so that’s saying something, right?

We murdered the Fat Boy Fries

After the Imperial Stout I grabbed a Brown’s standard to help wash down the rest of the Fat Boy Fries I ordered and shared with Pig Destroyer Jon and Jeff2: Whiskey Porter. When I speak of being from the Capital Region this is the one beer that pops into people’s minds most often. Brown’s is famous for this beer and I’ve even been requested to bring some up for some VT bottle shares and the like. 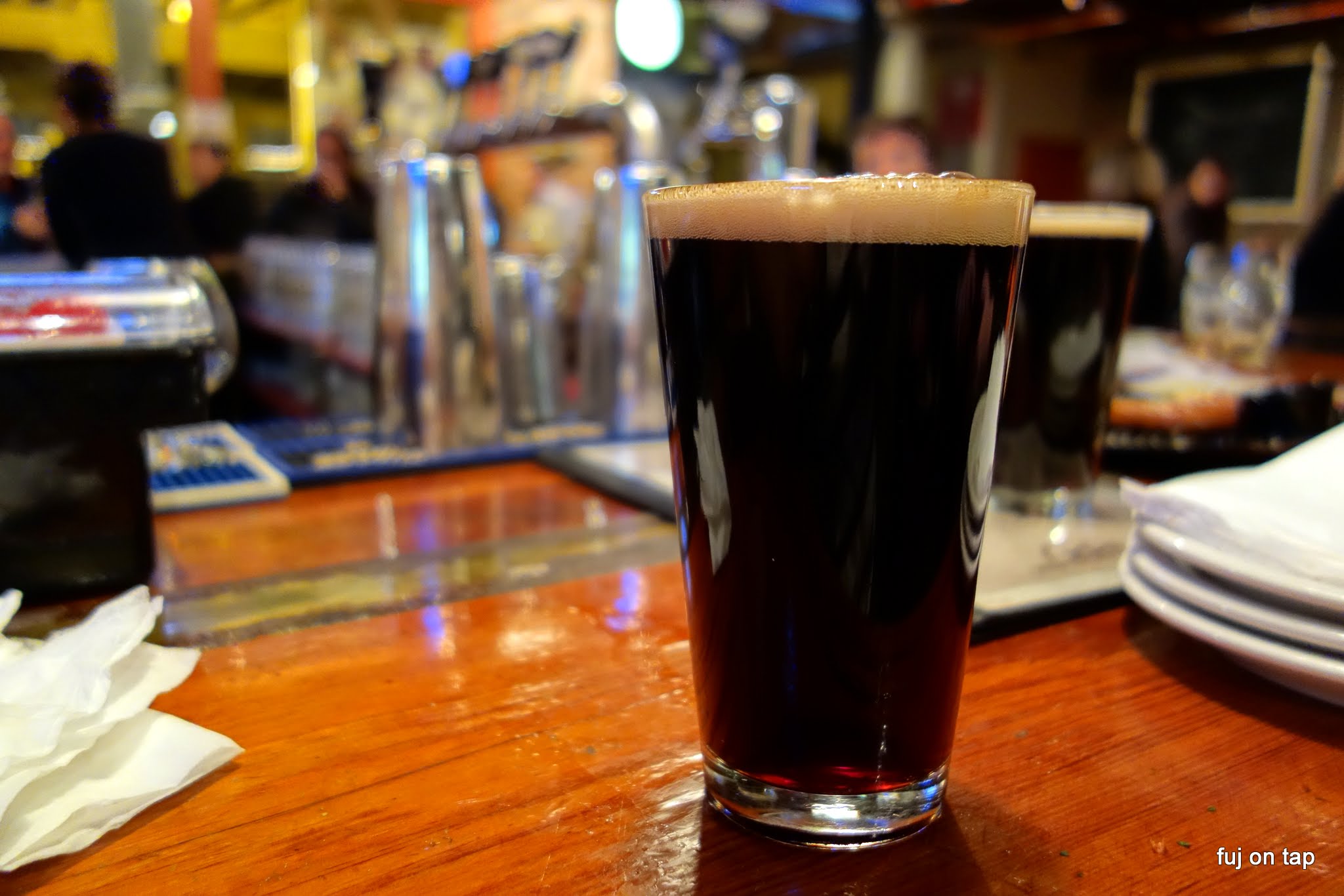 My first sip and there it was: disappointment. Surprisingly disappointment tastes exactly like diacetyl. Seriously, this was the most popcorn butter flavored beer I’ve ever tasted of any beer I’ve ever had in my life. And that’s saying something considering in last year’s Extreme Homebrew Competition at The Ruck someone submitted a beer in the Funky Fermentables category that had a couple of pounds of popcorn in it. Try as I might, I was unable to finish this beer and forced Jon to finish the rest. (Sorry Jon.) I’m not sure what quality control Brown’s beer goes through, if any. How a beer like this makes it out of the brewery is beyond me.

My overall impression of Brown’s has not changed from this visit. The beer is still not worth the stop, and while I enjoyed the food we had and the tap lines weren’t actually gross for once, as bar food goes there isn’t much under the $10 range except for pretzels and potato skins. The last time we had dinner there were some $20+ dish entrees that genuinely seemed inappropriate for the venue, and while it looks like the menu has been rectified since, even if the menu improved (or, *ahem* returned to it’s brewpub roots) what’s the point of going to a brewpub that has bad beer?