There was some time to kill in between our tours at Maine Brewing Company and Allagash, so we had the opportunity to stop by New England Distilling and check out the place. I’ve been following New England Distilling on FB for a while, and while planning our Portland trip and deciding on dinner at Grace, I saw that Grace was offering a cocktail barrel aged in New England’s own barrels. Having never had a barrel-aged cocktail before it was a no brainer, we had to stop by both.

The tour was interesting and our guide, distiller Tim Fisher, was very personable and had an answer for any question we asked. We haven’t done too many distillery tours so it was good to hear about how they make each of their spirits and check out all of the equipment used. Without huge columns, the still is a very different from what I’m familiar with seeing at Harvest Spirits and Albany Distilling, and looks to be an even smaller-batch set up. Like our local distillers, everything at New England Distilling is all done by hand. 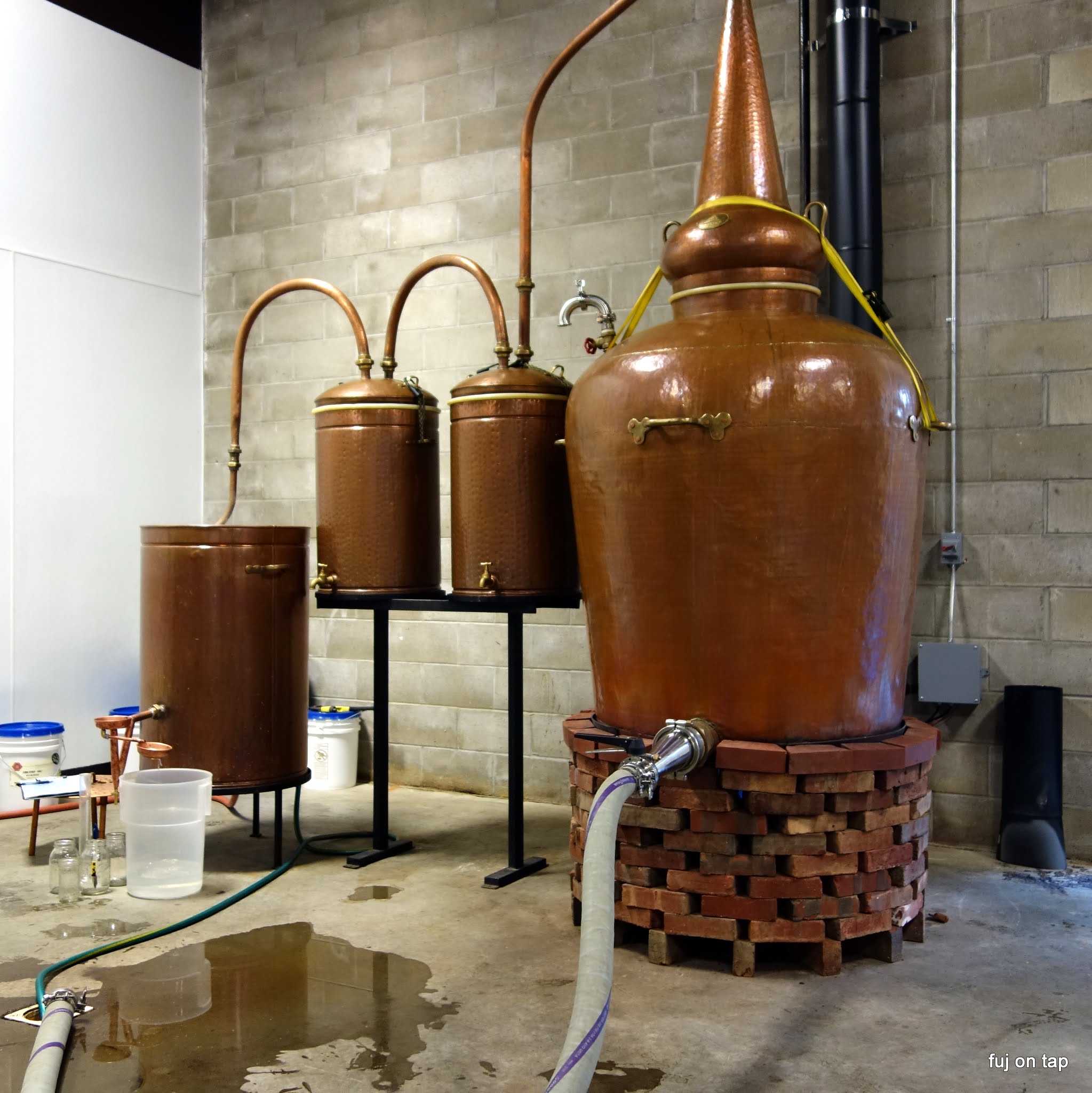 Barrel aging is of course a big thing around New England Distilling and it was nice to hear about the partnership they have with Allagash (owner/distiller Ned Wright was their first employee) to use some of their barrels to age some of their own spirits before being sent back over to the brewery to age some special release beers over there. 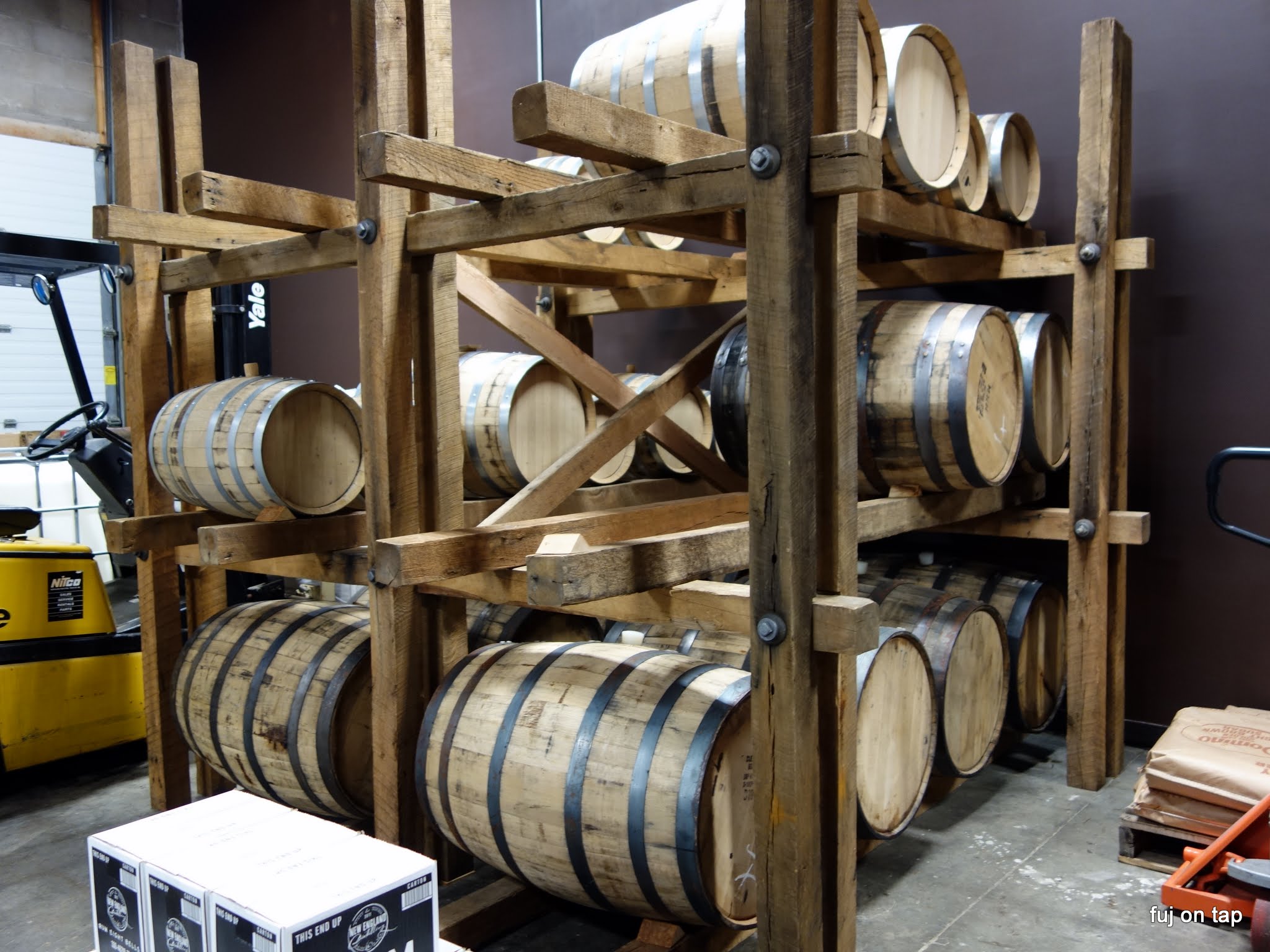 Did I mention “small batch”? Each bottle is filled corked, and labeled by hand, one by one. Love the use of mason jars here. :)

Of course no tour would be complete without tasting the fruits of their labor. They were very generous with their pours, especially when your significant other doesn’t particularly like drinking straight liquor, only takes a sip of each to taste and you’re left to finish the rest of her glass. Twist my arm.

The Ingenium Dry Gin has won awards at SIP, NYISC, The Washington Cup and others I’m sure I’m missing. It has some earthy, grain notes, a ton or coriander and a hint in juniper. This isn’t a gin that I would use for a gin and tonic, but makes a beautiful Negroni (of which the barrel-aged version I very much looked forward to at Grace). 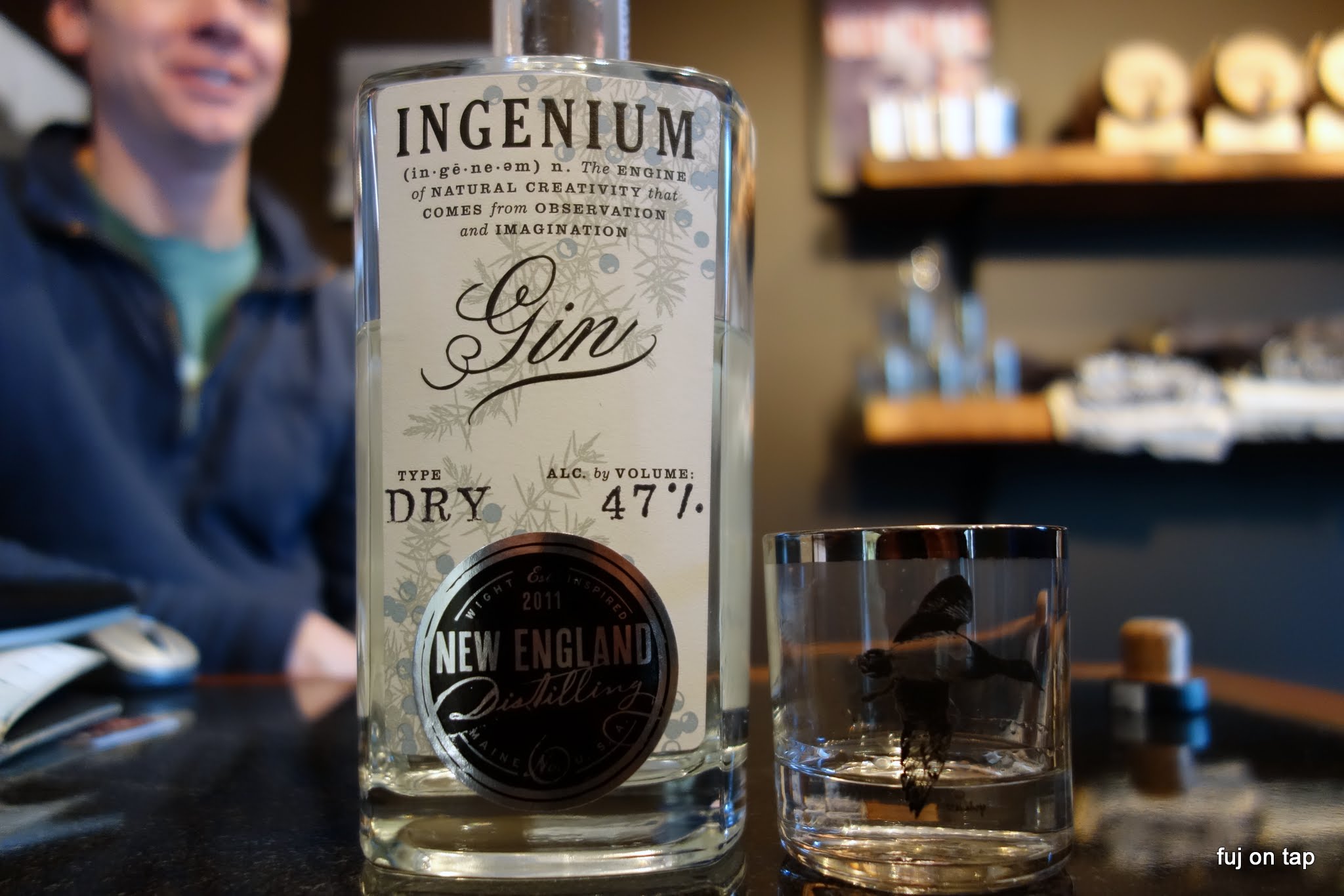 The wall of their retail shop has some incredible historic memorabilia from Sherwood Rye Whiskey, a distillery Wright’s great-great-great-grandfather, John Jacob Wight, started back in the 1850s, which survived prohibition but eventually was close back in the late 1950s. 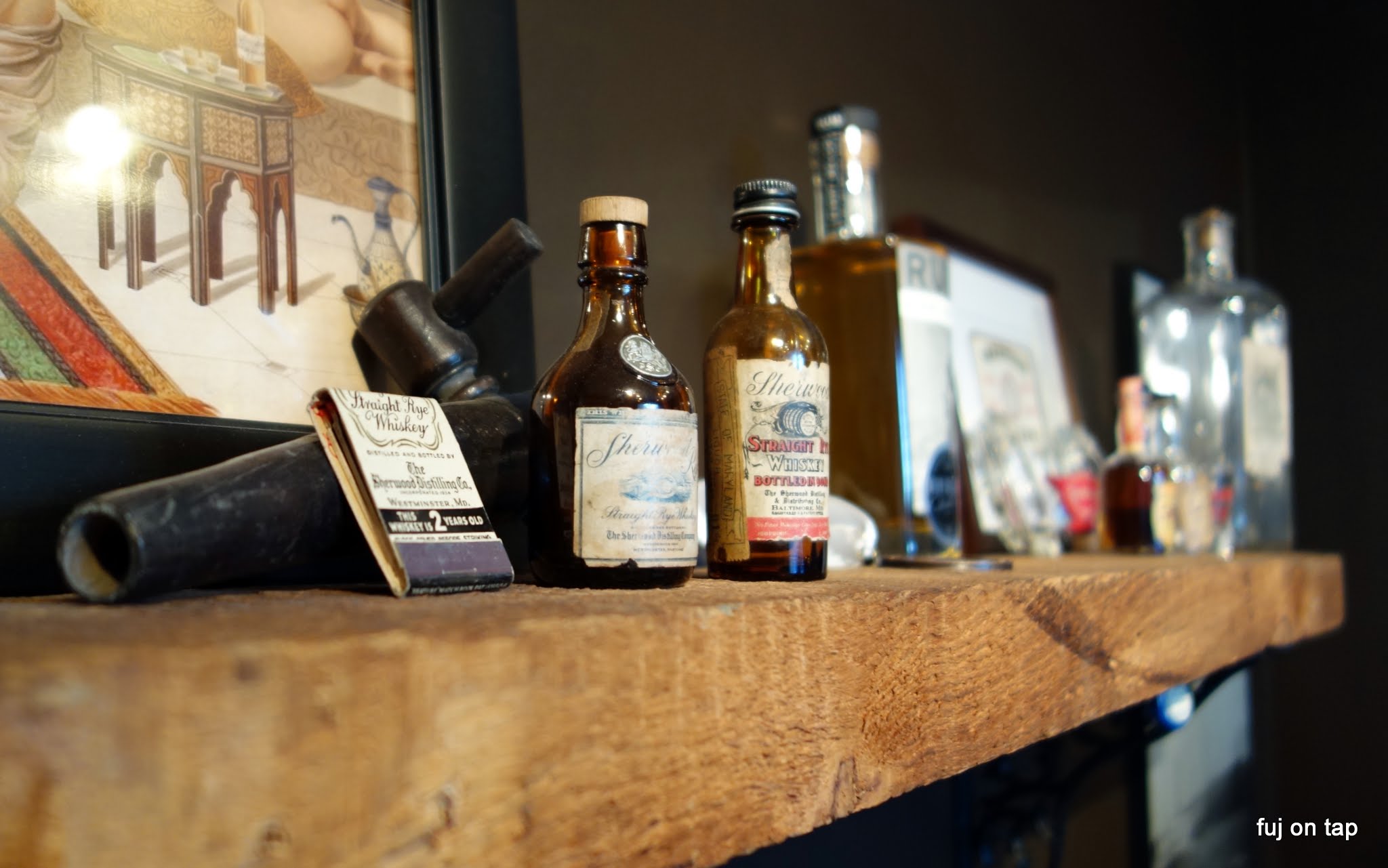 The Eight Bells Rum is New England’s latest offering, released sometime in September 2012. It’s based on molasses and aged in the Jim Beam barrels pictured above (which goes on to live a third life at Allagash for some rum-barreled offerings). It’s a really smooth drinking rum with some spice and vanilla notes, perfect for an old fashioned. Given the season, I though it wise to grab a bottle for making hot buttered rum on some of our brutally cold New York winter nights. 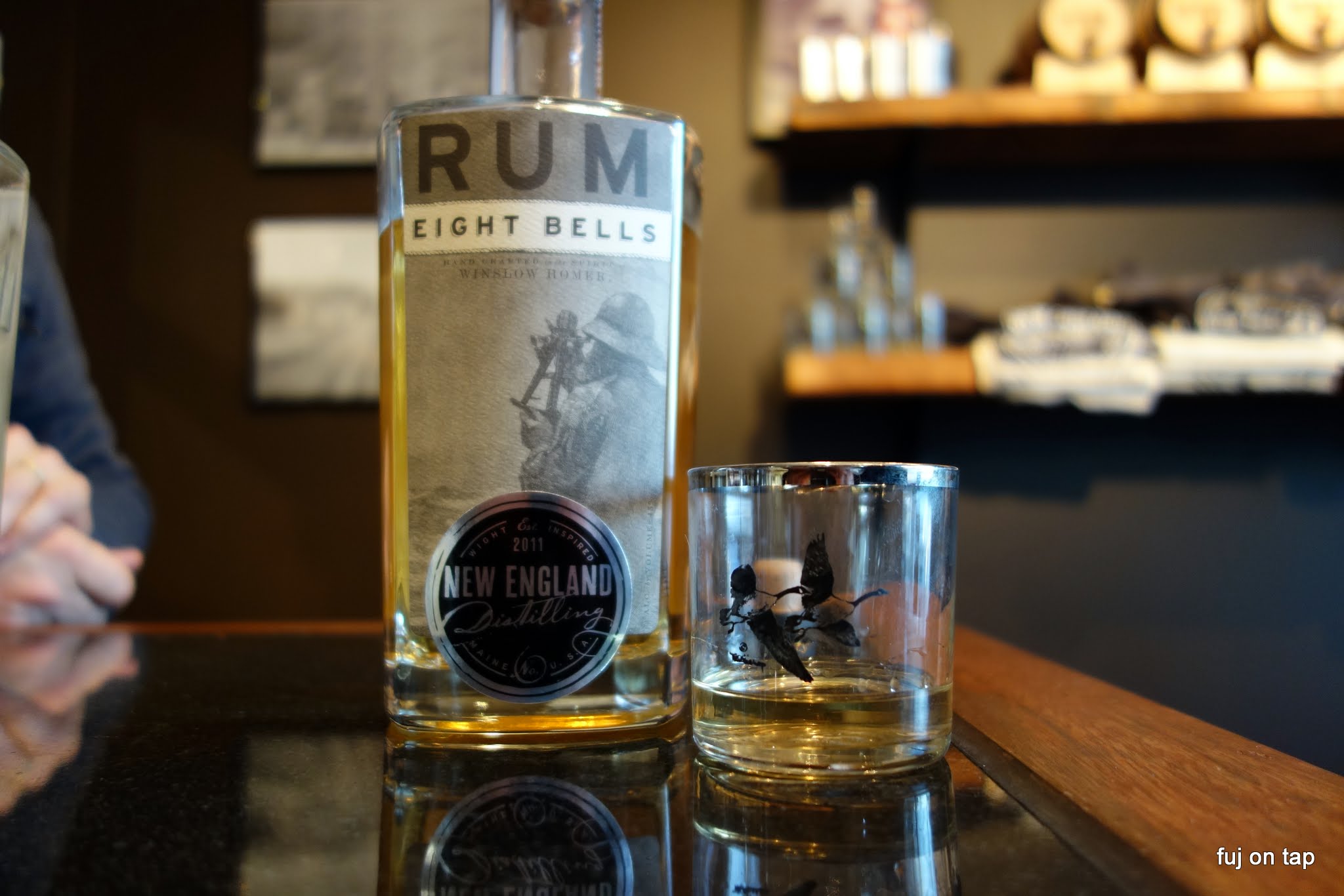 For those of you making the visit to Portland to hit up all of the great breweries and bars up there, definitely give New England Distilling a shot, whether it’s at the Distillery itself or one of the many bars in Portland offering mixed drinks and barrel aged cocktails with New England Distilling spirits. I’m very much looking forward to seeing their next offering: a rye using a tweaked version of their family’s recipe for Sherwood Rye Whiskey. Rye is huge in whiskey right now (even Albany Distilling just released a rye mash version of their Coal Yard new make whiskey two weeks ago) and I’m sure it will be just as outstanding as their gin and rum.