Before we get into that though, let’s talk about what makes a great cheesesteak. A cheesesteak is not complicated. It is comprised of a very few select ingredients: bun, steak, cheese and optionally very minimal toppings.

The bun must play a delicately balanced role of being hearty enough to withstand the grease (no one likes a cheesesteak blowout) while also not getting in the way of the meat and cheese. The bun should have a slight crisp to the outside while the interior provides a soft pillow for your meat to reside.

The meat needs to be a cheaper cut, ensuring a decent amount of fat without being too gristly or needing to supplement frying on the grill with too much added oil. And there should be ample amounts of meat, too. Enough so that the ends of the bread aren’t bare and when the sandwich is folded over the meat starts peaking out the top of the bun. And overstuffed bun is fine with me, too, but at least a fully covered bread is key here. This shouldn’t really need to be said, but there’s no such thing as a chicken philly cheesesteak as that’s just a chicken sandwich, and a roast pork sandwich is a totally different animal altogether.

Lastly, and this is a big one, is the cheese. A lot of people stick their nose up at Cheez Whiz stating that it isn’t “real” cheese and that it is solely for tourists on a Philly Cheesesteak. Many of these purists opt for provolone on their cheesesteaks. These folks would be wrong. Yes, there are plenty of Cheez Whiz knock offs that are absolutely wretched, but the real deal stuff from Kraft provides just the right gooey and oozy texture coupled with a salty, tangy taste that just fits so perfectly with the cheesesteak. Plus its viscosity at high temps allows for proper dispersion of the sauce to provide the best coverage of cheese in each bite.

As for toppings, well, really… you don’t need any toppings. Sure a small portion of sautéed onions and peppers may find their way onto your cheesesteak (which is fine as long as they are fresh and aren’t that shit from a can Sysco tries to pass off as peppers) but beyond that the toppings shouldn’t detract from the star of the show: the meat and cheese. Mushrooms are gross, spaghetti sauce should be reserved for pasta and anything beyond that is just getting too fancy.

So now that you know what my criteria for the perfect cheesesteak is, let’s visit a couple of the cheesesteaks we have in the area.

The first one comes from Morrette’s King Steak House, a place we visited in an act of desperation as we could not hit up Tony Luke’s on our drive home from Florida this year and we were seriously jonesing’ for a cheesesteak. Other options included Philly’s Bar and Grill or Pepper Jack’s, but Pepper Jack’s uses the aforementioned “shit” knock off Cheez Whiz and I wanted to make a stop out to the The Bier Abbey to visit two of my favorite bartenders Todd and April, so Morrette’s it was.

Morrette’s has a bit of history and is somewhat famous for its cheesesteak. It’s been around for ages and has has even been featured on the Travel Channel’s Food Paradise,  although for the life of me I cannot find the episode it was featured in, so maybe that footage was cut. I really wanted to like this place. 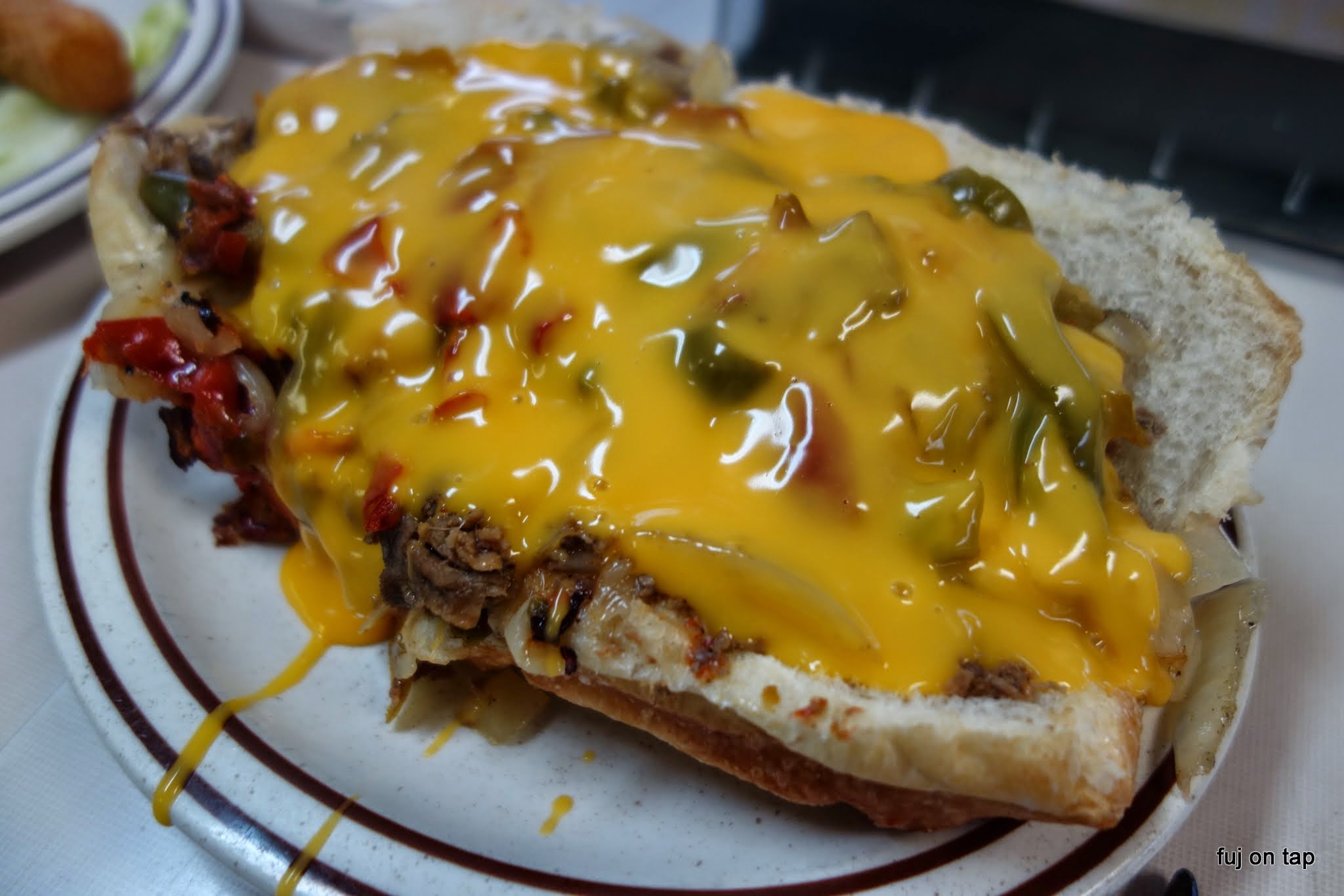 Sadly, this was not in the cards for us. First off, there’s nothing on the menu for you to get a real cheesesteak. The default version at Morrette’s comes with red sauce which, as we discussed before doesn’t beelong anywhere god damn near a cheesesteak. The beef is steamed. Or at least, doesn’t touch the griddle before it hits your bun. This is sacrilege. The beef slices sit in a tub on a steam table for who the hell knows long and arrives on your bun warmish at best. The onions were fine, but again the peppers are that unacceptable canned shit. Unlike the beef, the veggies did find their way to the grill but were not allowed to touch each other, and certainly were not mixed in with the beef. There was a massive layer of beef, followed by a layer of onions, then a layer of fake peppers topped with way, way too much cheese goop. It wasn’t pretty.

I proceeded to mix up the steak, veggies and cheese, then eat a bit of the mixture so I could potentially close and then pick up the cheesesteak. This did not prove to be fruitful as there was an immediate bun blowout (I have a feeling the bun was steamed as well but I can’t be 100% sure of this). No cheesesteak should have to be eaten with a fork and knife. Ever. Still, I powered through it and ate about half the bun, and just over half of the filler and I was done. The meat was lifeless. The veggies were gross. The cheese just wasn’t right. This just wasn’t a good cheesesteak at all. I can’t recommend Morrette’s to anyone, honestly, and I’ll never be back again. It was that bad.

I have shied away from Philly’s Bar and Grill for a while now after a ridiculous experience there where some 60 something year old Karaoke DJ crooned it to the oldies during a farewell get together we held there for a friend who was being deployed. We were there for drinks and the tap selection is rather boring and some of the crowd that night was a little on the trashier side than my comfort zone generally allows.

On a rare lunch where I was up in the Colonie/Latham area for work, once again I felt the urge for a cheesesteak. I decided to look beyond my past judgement of Philly’s and get the beauty you see pictured above (excuse the Instagram pic, it’s all I got). This is the polar opposite of the cheesesteak from Morrette’s. I ordered double meat which even still gives you about an inch of empty bun on each end, but you have enough meat here to spread around for the perfect bun to meat ratio. Otherwise you get this barren desert of a bun like Daniel B’s posted on AOA, which honestly has too much bread and is pretty inexcusable for a cheesesteak.

Luckily mine was done right. There was no bun blowout. There were freshly sautéed veggies. The cheese didn’t taste like gross although I could have used just a tad more of the orange stuff. And the meat had a ton of flavor, had been recently crisped up on a griddle, and only could have benefitted from being chopped up just a smidge more. This is everything I could have asked for in an Upstate New York cheesesteak and one I can highly recommend.

2 thoughts on “A Tale of Two Cheesesteaks”