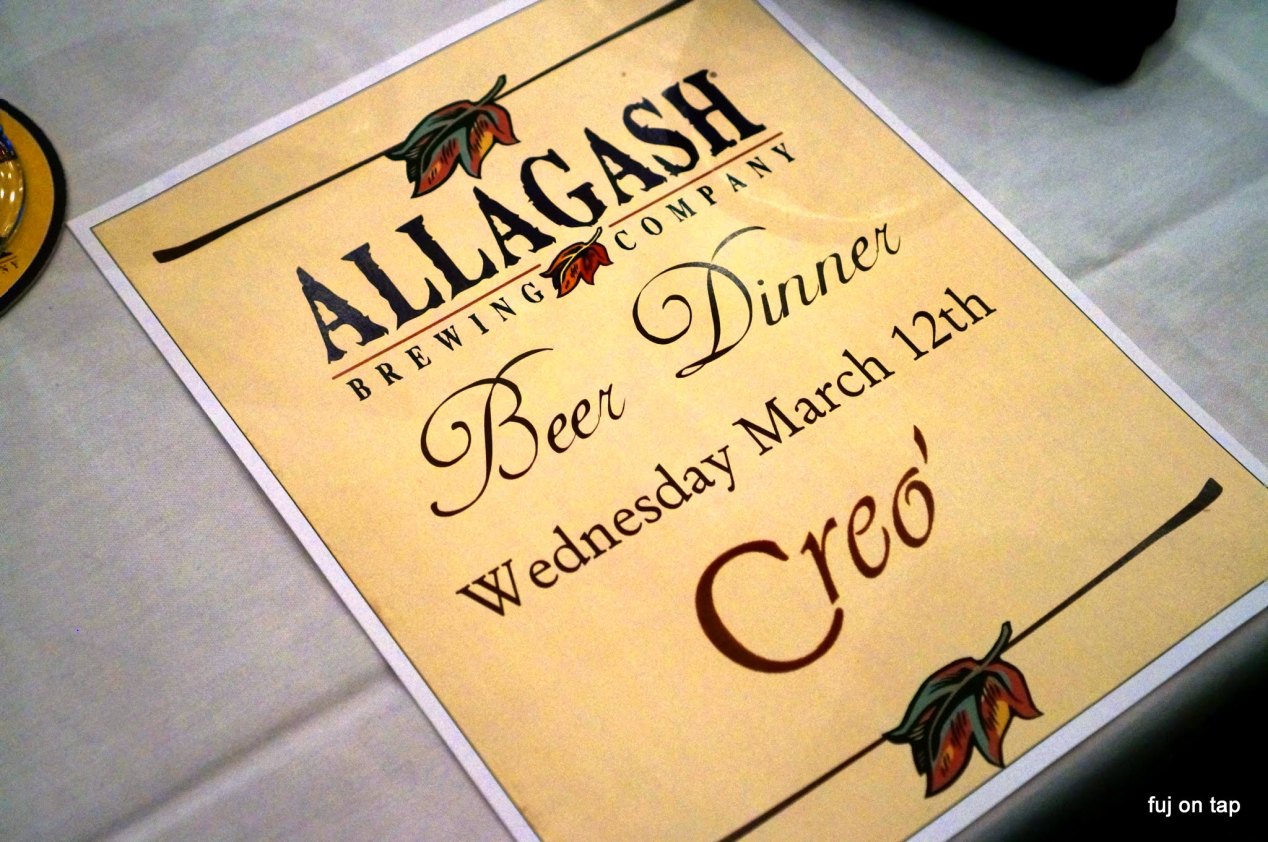 Allagash Beer Dinner at Creo
Last week was the second of Creo’s beer dinners, this time Chef David Gibson paired up with Dave Gonzalez to bring us some of Allagash’s Belgian-style beers along with David’s excellent culinary skills.

After a brief hiatus, Allagash is now distributed in our area again in a huge way, with drafts picked up by several of local bars and eateries and their bottles on all of our bottle shops’ shelves, including some of their special release offerings like FV13 and Merveilleux. Allagash is often spoken in the same sentence as New York’s own Brewery Ommegang, given that they both brew Belgian-style ales. The big differentiator here is Allagash’s wood aging and coolship programs, producing such gems as Bourbon Barrel Aged Black, Curieux, and their famed fruited Coolship series, not to mention the closest thing we have to gueuze here in the States: Coolship Resurgam. Needless to say, I’m a huge fan of Allagash (see past visits here and here) and glad to see they’re back in our area and included in beer dinners like this one.

We started with an amuse bouche of chickpeas that were baked then flash fried and lightly salted and seasoned served with lime wedge. After squeezing the lime juice onto the chickpeas, the aroma that lingered on your hands was revisited with each bite and sip, accompanying the coriander and orange peel in the Allagash White extremely well. 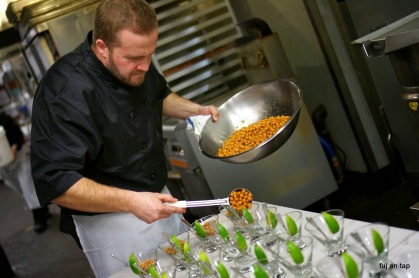 Next up was a ceviche of shrimp and scallops with fried plantain slices, avocado and aji sauce. This is one of those dishes that Dave makes that I like to bust on him about a little bit because of his aversion to spicier foods even though this dish was definitely on the spicy side. Once again paired with Allagash White, it reminds me that White is one of my favorite beers, maybe even the best witbier we have in the States, yet so easily accessible and drinkable.

The third course featured a soft boiled egg that was then breaded and fried, perched on a slice of sourdough with a spread of truffled pate, topped with vincotto black mission figs. This was paired with Allagash’s Interlude, a beer fermented with both Belgian farmhouse ale and Brett yeasts, then blended with a portion of the beer aged in French Merlot and Sirah barrels. 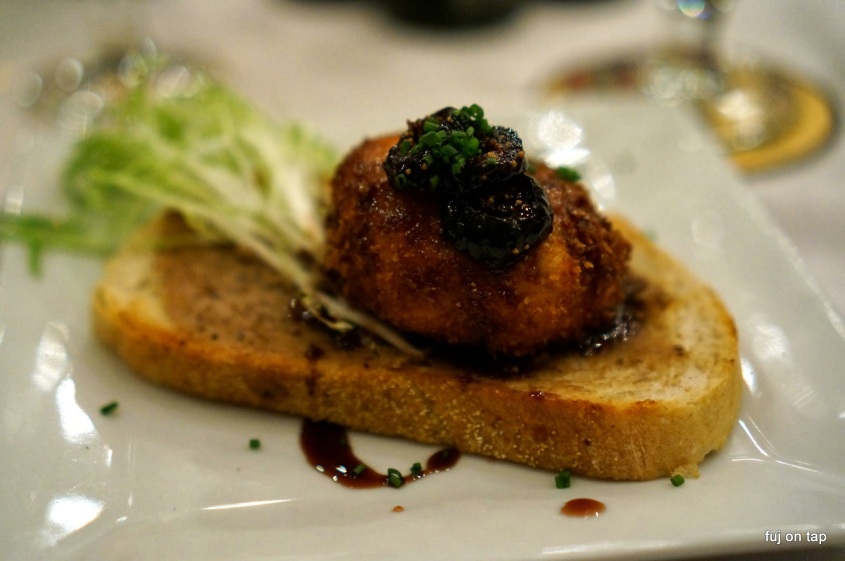 The Kurobuta pork tenderloin was absolutely the star of the show. The heritage pork (think the pig counterpart to wagyu beef) was encrusted with Fennel pollen and served still pink on the inside, a shock to those who’ve never encountered such high quality pork. The pork medallions sat on delicata squash puree (a crowd favorite), and topped with bing cherry compote. The compote tied in the dish nicely with the sweetness of Allagash’s bourbon barrel aged tripel, Curieux. 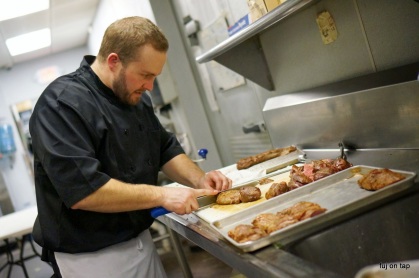 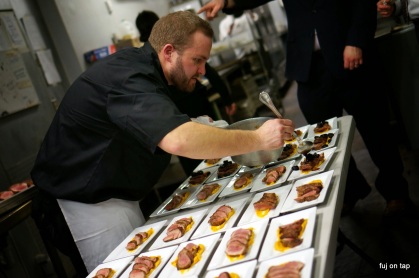 Next up was a round of New York State cheeses paired with Allagash’s quad, Four. Four has four malts, four sugars, four hops, and is fermented four times into an extremely drinkable beer for its 10% ABV. The favorite cheese was a hard blue that hailed from local Cohoes cheesemaker R&G Cheese. 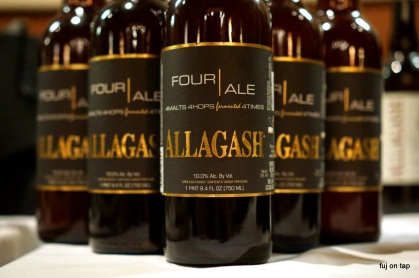 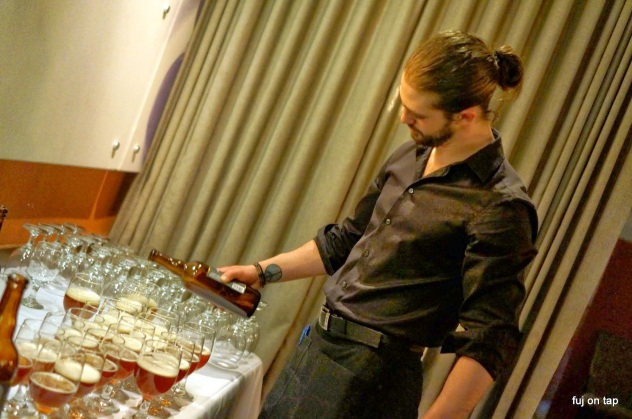 The last course, tempura fried strawberries (which I witnessed being hand dipped in the fryer, one by one) was paired with Tiarna, the latest in oak foudre aged beers from Allagash. It’s a blend of a 100% oak aged beer and another fermented with two belgian yeast strains in stainless steel. Fresh this beer drinks similar to a Brett Pale Ale but I’m interested in what happens with some age on it. 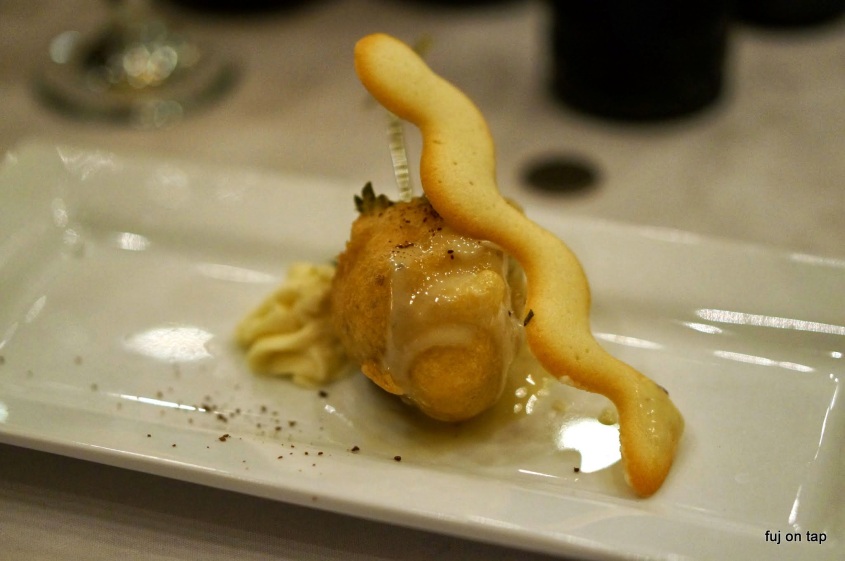 Don’t get me wrong, I loved every bit of the Jack’s Abby Dinner Creo’ did in January, and I think Jack’s Abby beers are some of the best lagers in the world. But Allagash makes beers that are just so much better suited to be paired with food, accentuate dishes, and to be cooked with. This couldn’t have been more evident than by the pairings that were presented to us that night. I didn’t think things could get much better than the dinner in January, but Chef Gibson outdid himself again. I don’t know what he has in store for the next beer dinner but I’m sure we’re all in for a treat.

One thought on “Allagash Beer Dinner at Creo’”