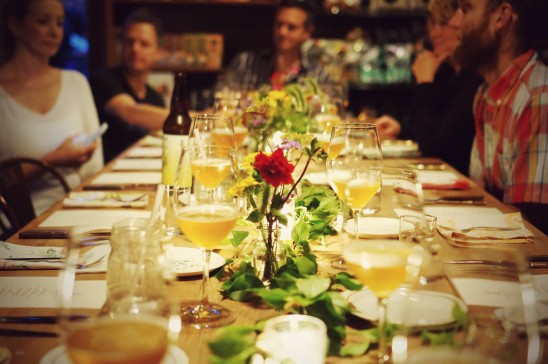 When The Grocery decided to hold their first beer dinner I knew I had to check it out. Andrew and Chef Nick Ruscitto paired up with Joe and Lauren from Grimm Artisanal Ales to bring an amazing seven course beer-focused dinner to Downtown Troy.

It was my first dinner at The Grocery and I thought the small 14 person seating worked quite well. Everyone communed and conversed together and it felt much more intimate than some of the bigger dinners where guests are seated separately. It made for a nice setting to ask questions to the Grimms and listen to Andrew’s stories in between bites and sips.

Grimm Artisanal Ales brews about one beer a month and rarely do they revisit an old recipe, so it was nice to see so many of their beers under one roof. Even Joe and Lauren admitted that this was the first time they had had that many of their beers back to back so it was an occasion for them as well.

It was a surprise to hear that all of the dishes we had were created in a small apartment sized kitchen upstairs with a simple four burner stove and oven like you or I would have at home. It really goes to show what kind of talent Chef Nick has. Let’s take a look at the pairings for the night:

Bees in the Trappe | charcuterie, cheese, pickles
Can’t go wrong with Andrew’s cheese and meat recommendations and everything went well with the house pickled veggies. 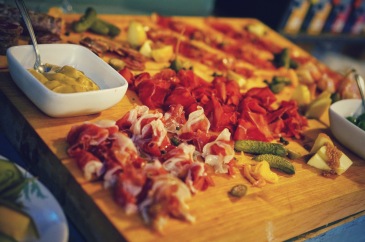 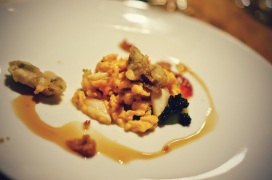 Orgone Accumulator | octopus, heirloom cannellini, saffron
I’ll admit I don’t go out of my way to eat octopus and this is definitely the first time I’ve had the dish presented with the suckers but this actually worked quite well.

BFF | rib eye, creamed corn, scallions, ash
No surprise my favorite dish of the night. Beef was cooked perfectly, the pickled mushrooms were great and the ash oil is one of the most unique things I’ve seen at a beer dinner (quite tasty as well).

Overall I’d say the dinner was a success, especially considering it was their first beer dinner and the aforementioned kitchen restrictions. I’m happy to see restaurants in the area like The Confectionary/The Grocery going all in on beer events like this rather than sticking to only wine dinners or playing it safe by selecting well known, easy to obtain beer offerings to go with their dinners. The B. United event they had Tuesday night looked amazing as well, and I’ll probably stop in another time this week to check out the “Evil Tacos” they have lined up, too.

Thank you to the Grimms and everyone from The Grocery and Confectionary who made last night’s event possible. Looking for to seeing where you take beer next!

3 thoughts on “A Dinner With Grimm Artisanal Ales at The Grocery | Troy, NY”