On Monday night a whole slew of friends braved the impending “storm” to head out to The City Beer Hall’s Artisanal Beer Dinner (you can check out fellow blogger Kim’s post on dinner here). The storm that night ended up being a dud, but thankfully Chef Dimitrios and his crew, pictured above, put together a dinner and pairings that were anything but. 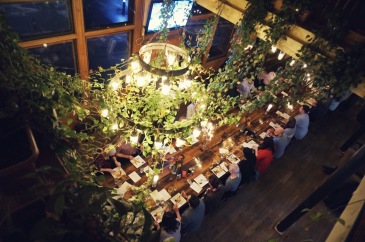 It’s been a while since my last beer dinner at The City Beer Hall and unlike most of the Wild Game Nights that center around the lineup from a specific brewery, this was open to the full range of offerings from local distributor Remarkable Liquids. It was nice that some limited releases were brought in just for the event and were poured for the first time or not available elsewhere in the state. Let’s take a look at the pairings of the night:

Eden Sparkling Dry Cider | crudo: scallop, oyster & tarragon puree, caviar, shiso
Easily one of my favorite pairings of the night. The cider from Eden in the Northeast Kingdom in VT is on the dryer side, more so than our local Nine Pin Cider. It’s aged for 12 months in French puncheons, bottled with a secondary fermentation with fresh apple juice, then hand disgorged after 6 months like you would see with a sparkling wine or champagne. The oyster and tarragon puree was so unique and worked so well to mop up with the scallops. 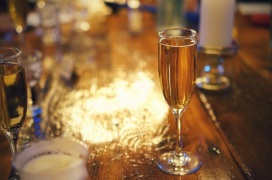 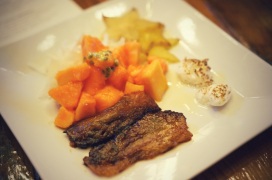 Almanac Farmer’s Reserve Blackberry | beets: beet & olive oil sorbet, beet & goat cheese mousse, beet crisps, blackberry gastrique, smoked sea salt
Beer of the night had at go to the Farmer’s Reserve Blackberry. Almanac is one of the breweries who are brewing elsewhere but bringing the wort in house to age on various barrels and fruit for the Farm to Barrel series. This version takes their sour blonde ale base and infuses it with blackberries then it’s aged in red wine barrels. Lacto tartness dominates here with some mild berry in the the nose and taste. The beet fans of the night raved about this dish. 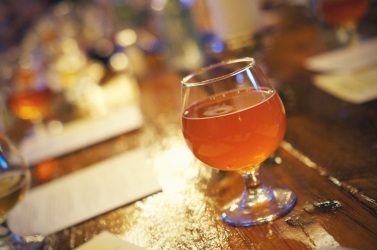 Perennial Fete de Noel | duck: duck breast, roasted black radish, prunes, duck hearts, watermelon radish
Duck is not something I’ve yet tackled at home so I always look forward to it while I’m out. Here the hearts were skewered along with prunes (a perfect bite together) and the roast breast was cooked perfectly rosy red beneath its crispy skin and thick layer of fat. The malty Fete de Noel broke up the lighter, sweeter drinks of the night nicely.

B.Nektar Zombies take Manhattan | panna cotta: chai tea, sour cherry sauce, kiwi
The final course of the evening featured a barrel aged version of Zombie Killer from B.Nektar called Zombies Take Manhattan. This higher ABV version of the beer comes in at 12% ABV, twice that of the base, and is aged in rye whiskey barrels. Like most meads this comes in a bit sweet, and the apple and cherry dominate here with little barrel character. Sticking with the theme we were presented with a “zombie eye” made from panna cotta with a kiwi “iris” over a bed of red cherry sauce “blood”.

It’s always a refreshing change of pace to see Dimitrios get creative in The City Beer Hall kitchen. You can tell he really goes all out on ingredients you wouldn’t normally find even as part of their specials, and clearly (especially with the zombie eye) he’s having fun with it. The beverages of the evening from Remarkable Liquids were unique to the area and definitely kept things interesting. Big thank you to Chef Dimitrios, his staff, and Jeremy Irving from Remarkable for putting together such an amazing night. See you guys at your next event!

One thought on “Artisanal Beer Dinner at The City Beer Hall | Albany, NY”