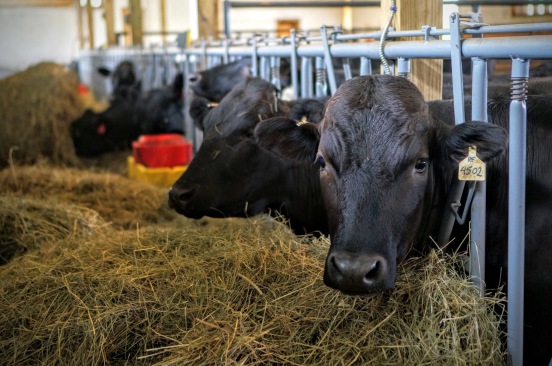 With the recent announcement of the Troy Planning Board giving the go ahead, I figure today is a good day to share these pics with you guys. If you haven’t yet heard, there’s a new butcher shop opening up on River St. in Troy called Sentinel Butchery. Emily Petersen’s plan is to bring whole animal butchery to the Capital Region, sourcing meat from local farms and slaughterhouses whenever possible. She’ll be offering cuts of pork, beef, and chicken, along with sandwiches, charcuterie, and other retail items. I lucked out and was able to tag along on one of her farm visits last week, and it just happened to be one that specializes in Wagyu cattle, Mangalitsa and Berkshire hogs, and lamb, along with a USDA slaughterhouse.

A brief warning about today’s post. This will be a little different than what I usually write about here. This post is going to be extremely photo and text heavy (and y’all know I’m a terrible writer) and the photos on the kill floor are going to be graphic. I don’t think I have too many vegetarian or vegan followers, but if there are any of you out there this post may not be for you.

Royalton Farms is just a short ten minute drive away from one of my usual Vermont haunts, Worthy Burger. It’s located in a stunning, picturesque agricultural area of South Royalton, Vermont with each section of the farm sprawling across the town a short, story-filled drive in an 88 Izuzu Trooper away from each other. We met up with owner/farmer Drew Alinovich who spent most of the day showing us around a few of their buildings, telling us about his background both in farming and in his past, and his philosophies in farming, business, and life.

Our first stop was to check out his F1s, followed by the purebred Wagyus at another facility. These first generation cows are typically crossbred 50% Wagyu 50% Angus, the second generation will mate with a purebred Wagyu again so they are 75% Wagyu, and then they’re breed again and again with purebred Wagyu until the fourth generation, when they are generally accepted as being purebred Wagyu. These cows are handled often were extremely docile in our presence, unlike your typical Angus. They took no issue with us behind the fence and had no problem sneaking up on us for a whiff and a quick lick in anticipation of food. Drew detailed an extremely interesting procedure where they were initially inseminating the Wagyu eggs, then implanting them in Black Angus cows to develop and birth the calves, allowing them to expand their Wagyu herd that much quicker than using Wagyu cows alone.

The existence of Wagyu cattle here in the US questions why we use Black Angus so predominately here in the first place. Black Angus cows grow quickly, with desirable marbling and ready to slaughter in as little as 18 months. This means less they’re quicker, cheaper to raise, and require less time and resources of the farm. And of course then there’s the marketing that plays a huge role in our perception of the breed as well. We see Black Angus advertised as a premium type of meat when in reality it’s the most common cattle in the US. Not to mention Black Angus only refers to the breed of cattle, not one of the 5 grades of meat laid out by the USDA. So unless the label states Certified Angus Beef, which only refers to the top two grades (Choice and Prime), then that soup with Black Angus beef in it you’re consuming probably has the lowest grade of meat available in it (Utility, Cutter, and Canner). On the other hand, thanks to husbandry 90% of Wagyu cows meet the equivalent of USDA Prime or above, and many produce marbling unmatched by even the highest grade Black Angus. 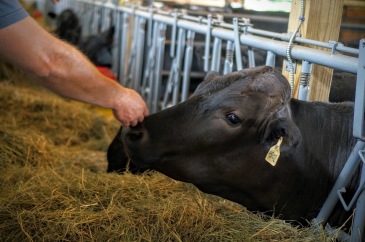 Next we checked out the farm’s Mangalitsa pigs, a breed until that day I was unfamiliar with. These pigs are huge, with curly hair like a sheep, growing over 300 lbs and are much less lean, up to 50% fat, than the pigs we see in our supermarkets today. This again has more to do with the fact that the pigs we most commonly consume, Yorkshires, grow faster, have more meat and are quicker to slaughter than the Mangalitsa. In fact, Mangalitsas are even more expensive to raise than other, more common heritage breeds such as Berkshire and Ibérico, but restaurants such as The French Laundry and Eleven Madison Park willingly pay the premium for what many claim to be the best pork in the world.

We were lucky there were two sows in the barn while we were there, one who had just farrowed within the week, and another that was due shortly.

Our next stop was to visit the Berkshire pigs located in the same facility as the full bred Wagyu, and like the Mangalitsa, these pigs cost more to bring to market than your typical Yorkshires. They require more feed and have fewer piglets, so like most colored pig breeds, they fell out of popularity in the 1960s when a push for leaner meats from white-skinned Yorkshires prevailed. Thankfully some of the farmers saved the breed, and we still have access to the Berkshire’s pink-hued, fattier, more marbled pork today. This was a short stop on our tour, and on the way out we briefly met Amber, the farm’s foreman (or forewoman?). A few pictures of her later on. 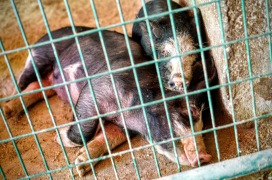 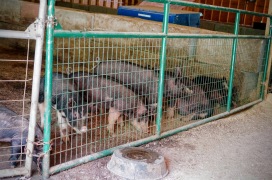 Next up was the kill floor. This was interesting because going into the tour none of us knew we were even going to see this happening, it was completely spontaneous and a benefit of being in the right place at the right time. They were slaughtering two Mangalitsas that day, and one was already bleeding out by the time we got there. There were some rules we needed to adhere to while in the USDA Slaughterhouse, such as wearing hair nets and white coats (mine didn’t quite fit), no pictures were to be taken of the USDA Inspector, and no pictures of the pig being stun or stuck.

Working in concert with each other the two slaughtermen first removed the feet, attached chains to the pig and quickly started removing the skin from the animal. As they worked their way down from the head, they made other cuts along the way, slicing down the center of the pig to start removing and inspecting the internal organs and removing some of the offal. The belly was incredible, a thickness of belly fat like I’ve never seen, coming in around four inches. Slowly they began using a lift to hang the animal higher in the air to ease access to the back so they could continue removing the skin from the pig. Hoisted to the ceiling with almost its entire skin hanging from the from neck, the pig was quite the sight to see. After that, a huge band saw/chainsaw like device hanging off cables from the ceiling was used to split the pig into halves.

After touring the pens on the backside of the kill room, seeing how they spiral the animal to the door opening of the kill room, we braced ourselves to see the stunning and sticking of the second pig. I didn’t know how I was going to react to this. Part of me was intrigued, part of me thought I might look away in anguish. A loud bang from the captive bolt pistol into the pig’s head was followed by swift movement from the slaughterman to stick the pig and begin the bleed out process. The death throes of the pig sent blood splattering along the backside of the kill room, some reaching over a few feet up the wall. The pig’s movement soon stopped, and the same process as the first pig began again.

This was shocking, but also an amazing opportunity. I couldn’t keep my eyes off the entire ordeal. I don’t think people really put too much thought into where their food actually comes from. It isn’t just a slab of meat. It comes from live animals and I think everyone, meat eater or not, should witness this firsthand and realize the gravity of what it really takes to put the food we eat on our plates. 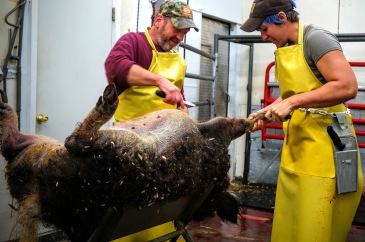 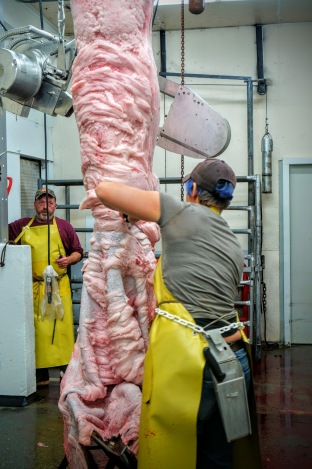 After we had had enough of the kill floor we moved onto the cutting room. There was a cold storage room with some Wagyu sides hanging from the ceiling, and a few other pieces of meats in various states of primal cuts. Here a butcher cut the ribeye from one of the Wagyu sides while it was still hanging from the rail. Drew took a knife and carved us off just a slice of the raw beef fresh cut off the 30+ day aged ribeye and we consumed it right there in the cold storage. It was, naturally, incredible. The ribeye was then taken back out to the cutting room where it was cleaned up and faced, displaying some of the nicest marbling on a piece of steak I’ve ever seen. 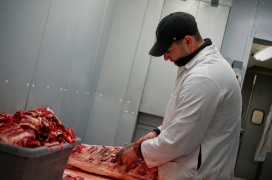 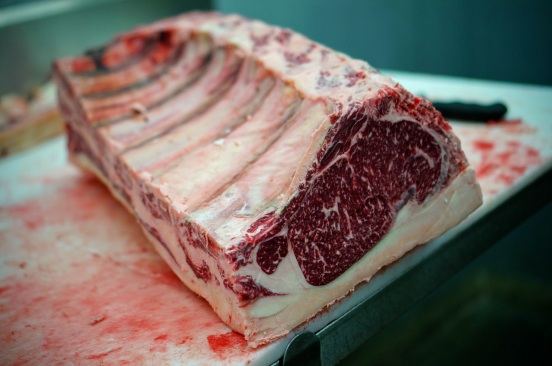 We finished out our tour with watching Amber and some of the (literal) cowboys wrangling up some of the herd to weigh in and check the tags on a few sets cows while I was stalked by one of the farm’s resident peacocks. It’s worth mentioning that Amber is completely badass for being as young as she is and for running as tight of a ship she does over this intricate network of farms they have in South Royalton. 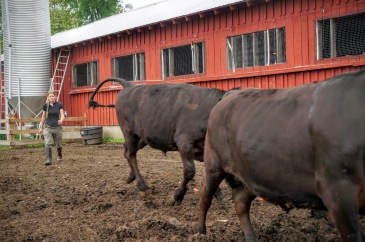 This was an eye opening experience for me on many levels. I feel like at this point of my life, for as long as I’ve been writing this blog, there are few brewery tours that I do that really “Wow!” me the way this farm visit did. This was not your typical visit to an orchard or farm with a petting area like I’m accustomed to. This felt much more real, and much more obvious where this type of farming fits into our food supply chain. Hearing Drew speak about how he isn’t the typical farmer, isn’t doing things just because that’s the way his family has always done it, and how he questions the standards of agriculture as they are today was extremely refreshing. Seeing a pig stunned and stuck with a knife, then immediately slaughtered is not something I think most people witness and is something I’ll likely remember the rest of my life.

I’d like to thank both Drew and Emily for this amazing opportunity. Congratulations are in order for Royalton’s Farms’ Wagyu getting written up in the New Yorker this month for the Tavern Burger at Church Street Tavern. I wish Emily the best of luck on Sentinel Butchery and I am very much looking forward to checking out some of the meat she’ll be bringing into the Capital Region from Royalton Farms among other local farms. Make sure to give Sentinel Butchery a Like on Facebook to keep track of when they plan on opening!