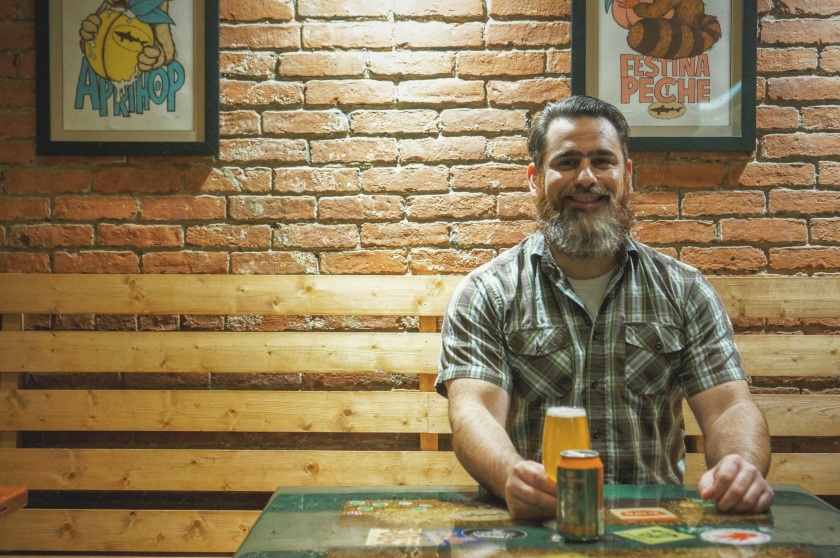 Dave Gardell has owned The Ruck since 2004. Like a lot of Troy, it’s an establishment we’ve seen mature and continue to reinvent itself over the years, going from a dive, to a late night college hang out, to a craft beer bar. It’s a place where a lot of us beer drinkers first dipped our toes into craft beer as we grew with the bar, and continues to be a mecca for some of the best beer selections in the Capital District.

Last night Dave and I sat down and BS’d over a few beers at The Next Level, a new project or “side dish” as he called it, located on the second and third floors of The Ruck. While we chatted I asked him to share a beer with me that had some significance to him, maybe something on tap from a brewery he really supports, something of nostalgia, or a favorite beer from his cellar.

Fuj: Tell me about the beer we’re drinking tonight.

DG: Today’s beer is Bell’s Two Hearted Ale, their flagship IPA. I had the privilege of first drinking this at a buddy’s wedding up in Saugatuck, Michigan back in 2007. Upon being introduced to this beer it was a paradigm shift for me in recognizing what craft beer was really all about. I was in my third year of ownership of the The Ruck and you heard about all these West Coast IPAs, and we had a few East Coast IPAs, and it was kind of this Biggie/Tupac argument, ya know? “Which one was supreme? East Coast? West Coast?” And then I had this gentleman stop me and tell me Midwest IPAs is where it’s at, and I was like “Holy sh*t, Midwest IPAs is where it’s at.” I had the beer with him and he talked about how in the Midwest they’re all about balance in their IPAs and it stuck with me. It made me see that there were a lot of other things that were happening beneath the surface beyond what I was being presented everyday at The Ruck. I was a huge advocate for Bell’s to hopefully make its way to our area, which finally happened a few years ago. It made me recognize other areas of the country, not only with the emerging IPA culture but the craft beer culture as a whole.

Fuj: We’re sitting in The Next Level at The Ruck. Tell me a little bit more about what you have planned here.

DG: The whole concept behind The Next Level at The Ruck is taking things we love, what we present in craft beer and food and showing it in a different light that’s not our tradition pub fare. Chef Rachel (Mabb) has been a blessing in allowing us to continue to evolve in my time as owner of The Ruck, from being a dive bar, to a college dive bar, to a craft beer bar and now being this “destination” if you will. We’ve hired some really awesome people and we’ve had great loyalty throughout the years and this is a tribute to them and all their hard work and efforts. We can now take what we do: eating, drinking and being merry, and offer it in a different light and a different format. That’s where The Next Level kind of came about.

It’s a gastropub, with some more artisanal fare with respects to food (from Chef de cuisine Adryanna Washock) and craft beer (curated by Beer Director Nicholas Nuzzolilo). We’re having more awareness in our pairings and taking that experience and sharing it with our customer base. We’re hoping to attract the craft beer curious and the craft beer passionate, who want to come up to the second floor and enjoy this Next Level experience. We want them to be able to see our rotating fare, which we’re looking to change every week, change some of the food offerings and the beer pairings that go with it. That’s the real energy behind The Next Level and the evolution here.

Fuj: You’re elevating the beer and food upstairs here, do you have any plans to do the same with spirits program, perhaps offer a handful of rotating whiskies like they do at Madison Pour House or some craft cocktails?

The other parts of our program we’ve recognized need more attention and we’re in the process of working towards that with the respects of wine, spirits and cocktail menus. We’re in the process of exploring and playing with different products, distilleries, and wineries that we can connect with and we feel passionate about like we do with the breweries we represent with craft beer, so we can find our niche.

Fuj: I see you’ve been doing Intro to Craft Brewing At SCCC and apprenticing with Kevin at Rare Form. What’s your plan there? I’ve heard rumors about you using the old Troy Pork Store for another new endeavor.

DG: (Laughs) that’s true. I am in the Intro to Craft Brewing at SCCC program, which has been a fantastic experience. Our professor, Rich Michaels (of F.X. Matt Brewing Co.), has been just an inspiration, being connected with him and his knowledge and mastery of craft beer and craft brewing process. I think everyone in the program is working really hard to make something of themselves with respects to whether it be career changes or aspirations to start their own craft brewery in the Capital Region.

Now with respects to the Pork Store, it is my intention to open up an artisanal project tying all of our energies we’ve executed in The Ruck and The Next Level. We hope to have a delicatessen in the Troy Pork Store space that will serve the neighborhood with prepared foods, but also pays tribute to the old pork store by taking some of the curing processes and maybe making our own cured meat program, our own fermentology program. Potentially offering some proscuitto, some soppressata, salumi, beer infused brats, things of that nature. And if the powers that be allows us to do so, it would be lovely to have a nanobrewery attached to that building, and have the beer that we brew match the deli foods that we put out.

Fuj: Wow, that sounds awesome. All right, I’m gonna lob a couple of meatballs at you. If you had one piece of advice you’d give to someone looking to enter the craft beer industry, what would it be?

The industry is something that I’ve never seen before. They actually care about their neighbors, they care about constituents. There’s no competition here. There really is a kind of fraternity of brotherly and sisterly love here. Don’t go into this industry if you’re trying to be “crafty” and not genuine, not craft-centric. Understand that there’s people working hard in what they believe in to make these opportunities happen and you have the ability to steward those relationships. If not, then you’re gonna find it difficult to connect with the public, and connect with the breweries and the distributors alike.

Fuj: Last question. It’s your last meal. What is it and what beer do you pair it with?

If it had to be my last meal it has to be something savory. I’m thinking something along the lines of oxtail with some rich gravy, and stewed vegetables with a dopplebock. Oh man, Troegenator keeps popping up in my brain. Gimme a high gravity doppelbock and give me some meaty goodness (laughs). I’ve stewed and braised many pieces of meat in Troegenator and they’ve all came out lovely.

The Next Level at The Ruck has their Grand Opening tomorrow night, 3/2 from 5PM-11PM. Reservations, while not required, are encouraged from Thursday going forward. The Ruck is located at 104 Third St.