—According to Allagash’s Faceebook page, Coolship Red is now on their shelves. Man, you guys couldn’t wait until Zwanze Day weekend could you? Hopefully there are still some left when I get there on Friday. Or maybe one of you Maine beer nerds wanna hook me up??

— Yesterday Night Shift announced on their homepage a new Barrel Society that they’re marketing as a beer CSA. You pay the money upfront and you reap the rewards of Barrel Society member-only barrel aged brews, swag, and an end of the year party. Sound familiar? It should. Check out what’s included:

On the beer front, they’re expecting:

Elise and I have been a big fan of Night Shift ever since I visited their brewery back in September. (She’s very much looking forward to getting her hands on some Fallen Apple.) They’re still a small brewery now, but if they take off the way The Bruery has with their Reserve Society, it may be wise to to get in on the ground floor now. In addition to the beers, they plan on using the money for:

Let’s do the math here. It works out to about $18 a beer not including all the frills. Now, I’m no stranger to spending $20-30 bucks a bottle on beers (hello Golden Blend?) but Night Shift is a fairly new, not as well established brewery compared to the breweries commanding those prices for beers. And there are only about 40 reviews for their beers on BeerAdvocate, total. I have, however, really enjoyed the stuff I’ve had from them in the past. But it’s still a big investment for something so unknown. Just because you pour some beers into barrel does not mean it makes magic (as evidence from Mendocino’s BA beers and some of the BA beers from Adirondack Pub & Brewery).

On top of this, I’m not local which means at least a few trips out to Night Shift, including fuel, food, their regular beers at $10-12 a bottle I’m sure I’ll buy when I pickup my Barrel Society ones, plus stops at Deep Ellum, Lord Hobo, and Craft Beer Cellar or wherever I end up venturing that day. The membership costs will definitely add up.

So what do you guys think? Is the 2013 Night Shift Barrel Society Membership worth it or is it just too much money to spend on beer?

Man it’s a good night to go out and drink in the Capital District. Lotta new stuff to the area. Some of the gems:

Lionheart Pub — Leftovers from their Southern Tier Beer Social, including some of the ones you don’t see on tap too often around here like Krampus, Old Man, and a couple of Oak-Aged versions. Not sure about tonight, but I was there yesterday and all were still on tap except 2XMAS. They do 5 oz pours and it’s a good chance to knock out some of the ones you’ve had but haven’t ticked on Untappd yet.

The Ruck — Smuttynose Strawberry Short-Weiss (Berliner Weisse beers are my favorite style right now, and I can’t wait for more breweries to brew some for next year. I had this at Deep Ellum and loved it), Terrapin Shmaltz Reunion Ale 2012

Where you drinking tonight?

Pretty big news. SAVOR will be in NYC for the first time at the Metropolitan Pavilion and adjoining Altman Building in Manhattan. Tickets go on sale April 17th 2013. Get your wallet ready!

“Part of our mission as a national, industry association is to promote small and independent craft brewers and their craft brewed beers to audiences around the country,” said Sam Calagione, chair of the Brewers Association’s board of directors. “Moving SAVOR to New York City, the culinary capital of the world, in 2013 is an incredible opportunity to showcase craft beer from a diverse sampling of small U.S. producers who have helped shift the perception of beer from something predictable and homogenized into the dynamic, flavorful, food-friendly beverage it is recognized as today. Craft brewers, beer lovers and foodies who attend SAVOR contribute to a historic localization of beer and a shift in the culinary arts world.” 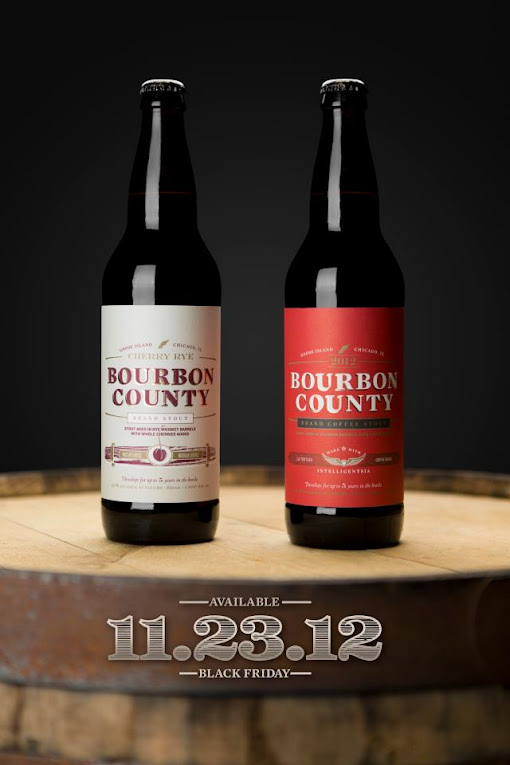 The annual Bourbon County Brand Stout variations will be available on Black Friday!

This years Bourbon County Coffee is made with a coffee from Honduras called La Tortuga from our friends at Intelligentsia. In addition, we will also be releasing Bourbon County Brand Cherry Rye Stout. This beer is aged in rye whiskey barrels with whole Michigan cherries normally used for Madame Rose.

We cannot guarantee that the beers will be on shelves on Black Friday, this is dependent on wholesale delivery schedules.

— GABF Gold Medal Winner Golden Sour is now available at their taproom, along with Silver Medal winner Golden Delicious. This is an awesome beer that fits in well with the end of my rant on this post the other day. Naturally that means I can’t make it down there this weekend. God dammit.