— Man, this was a good time and I’m really disappointed that I had to leave so early. Unfortunately, I had this, 30 Days to Dogfish Head Night AND a tasting at Chez Fuj to all make happen in all night. 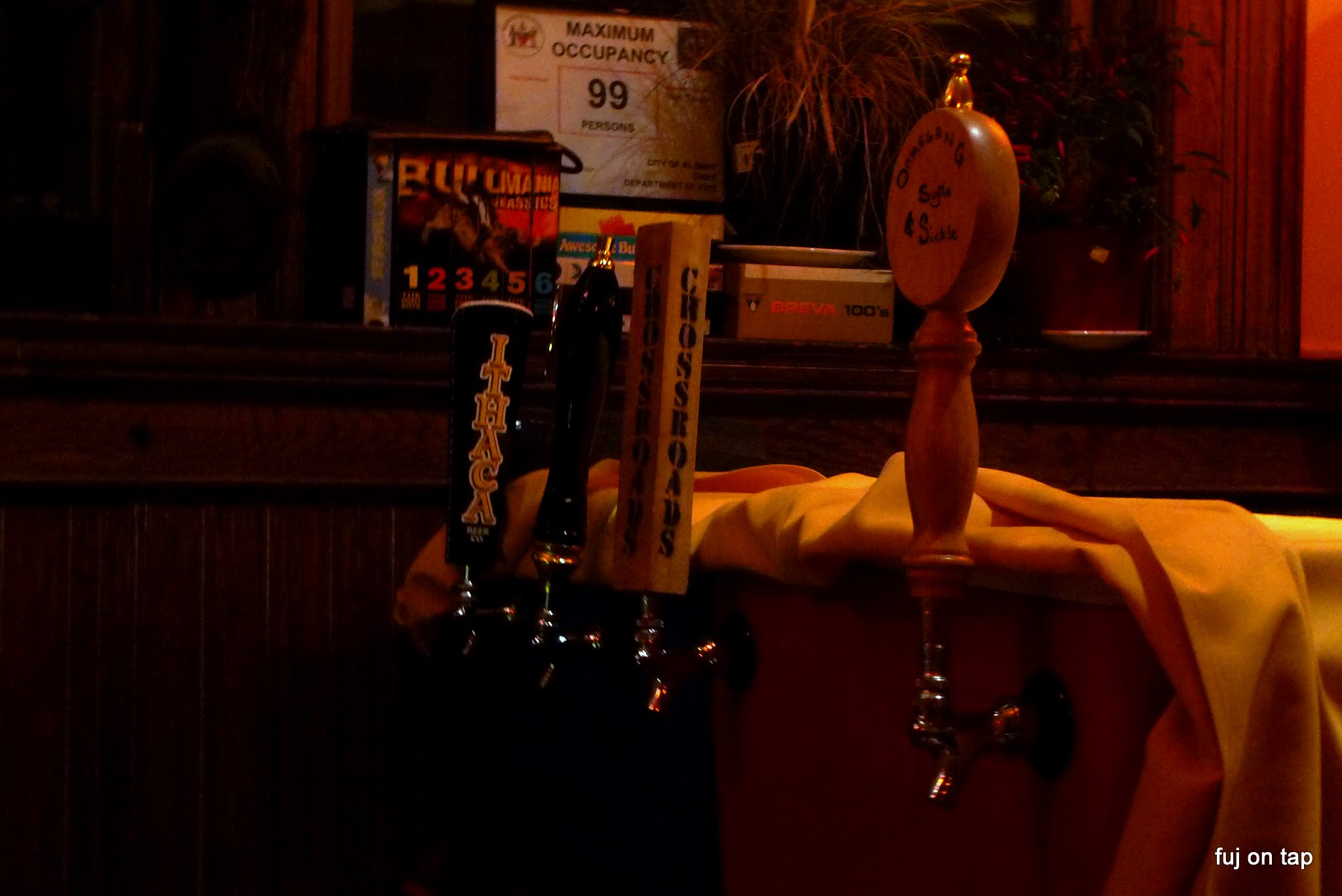 Lotta great local brews were there that night, including my locals faves Chatham Brewing and Crossroads Brewing. I grabbed some Dr. Loomis Pumpkin Ale from Crossroads, but not before getting some of Chatham’s Hop Crop IPA through what I can only imagine is the area’s first Hop Rocket. These things are badass:

Got to taste a few other beers with the owner of City Beer Hall and Jeremy of Remarkable Liquids, chat up Matt from Chatham and Russ from the Homebrew Emporium for a while and bullshit with the guys from Albany Distilling Company. The visit was short, but a good one. Can’t wait until their next event like this. 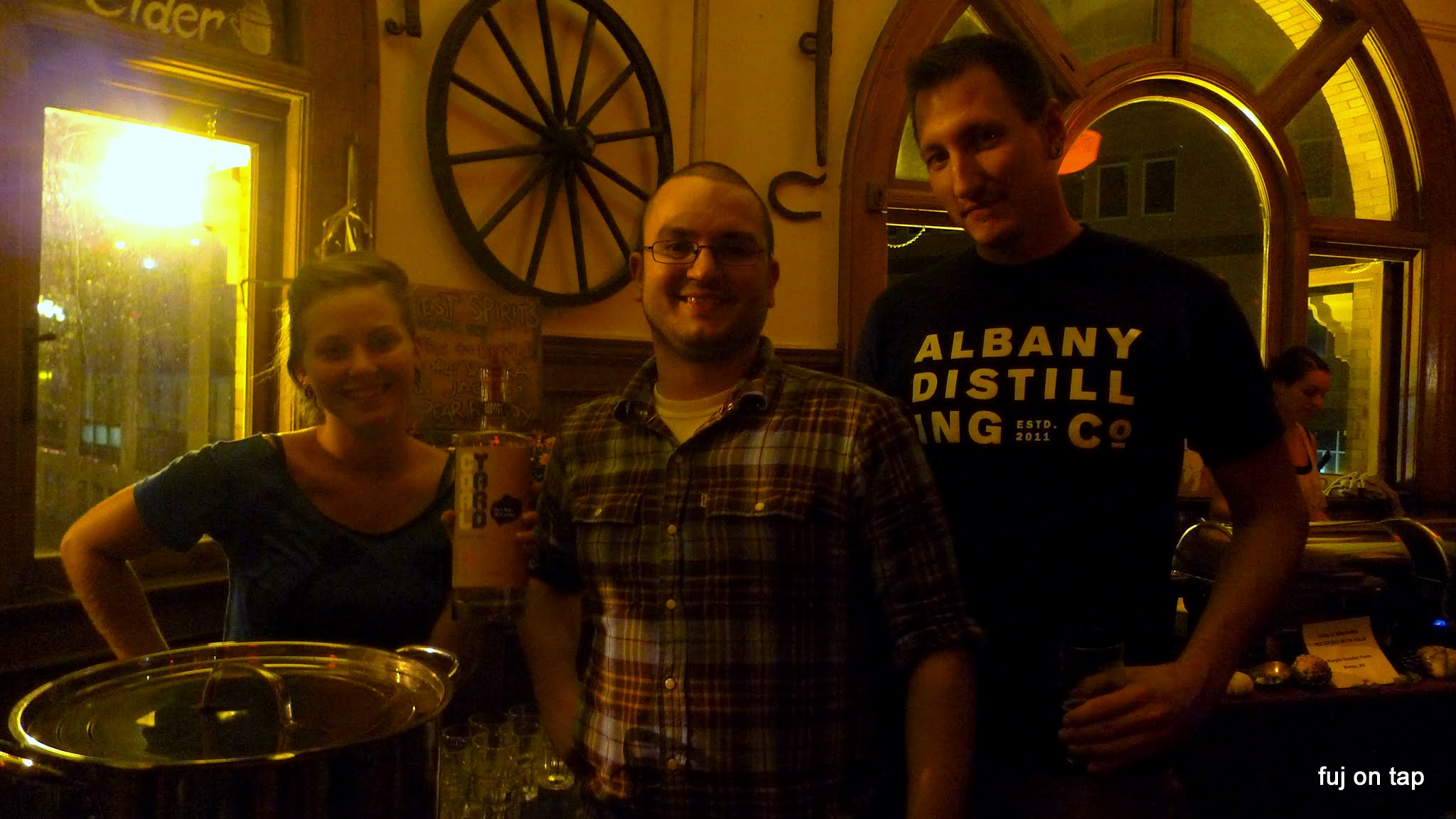 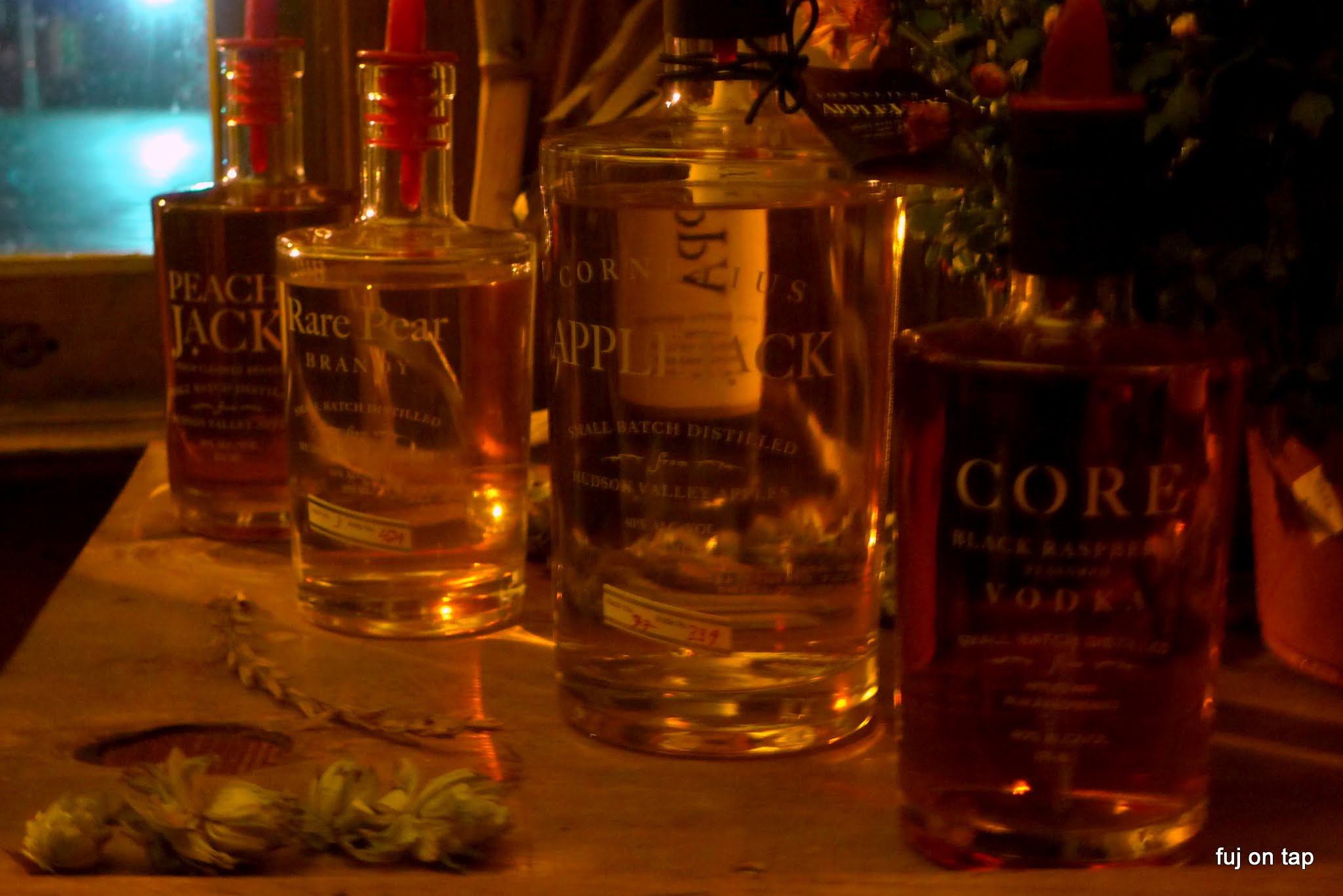 I call this one “Behold! The gift of beer!”

Snapped this picture today after the Third Annual Cider Doughnut Tour getting a couple of growlers filled at Chatham Brewing Company of brewer Matthew Perry looking pretty much badass as fuck. 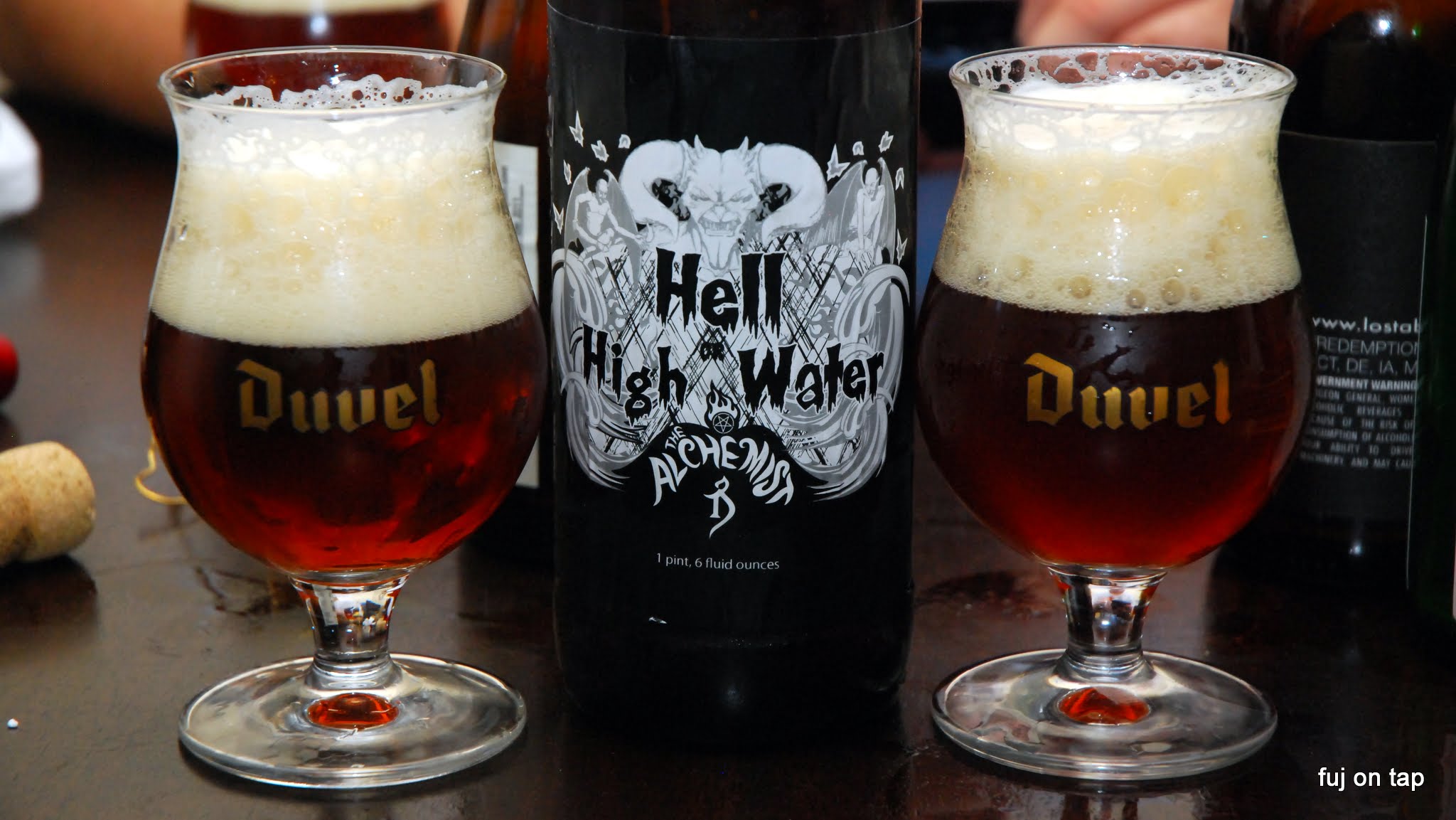 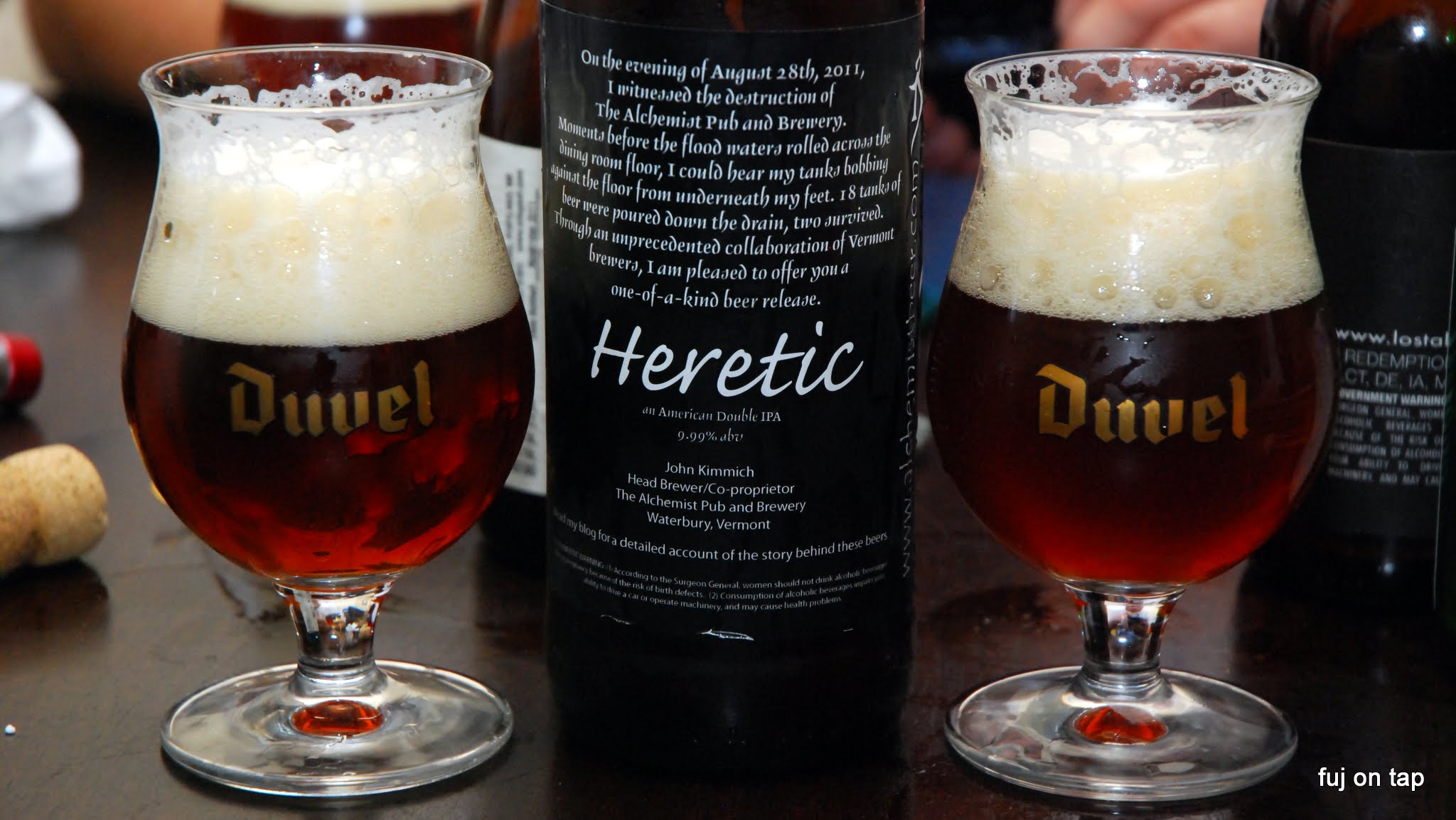 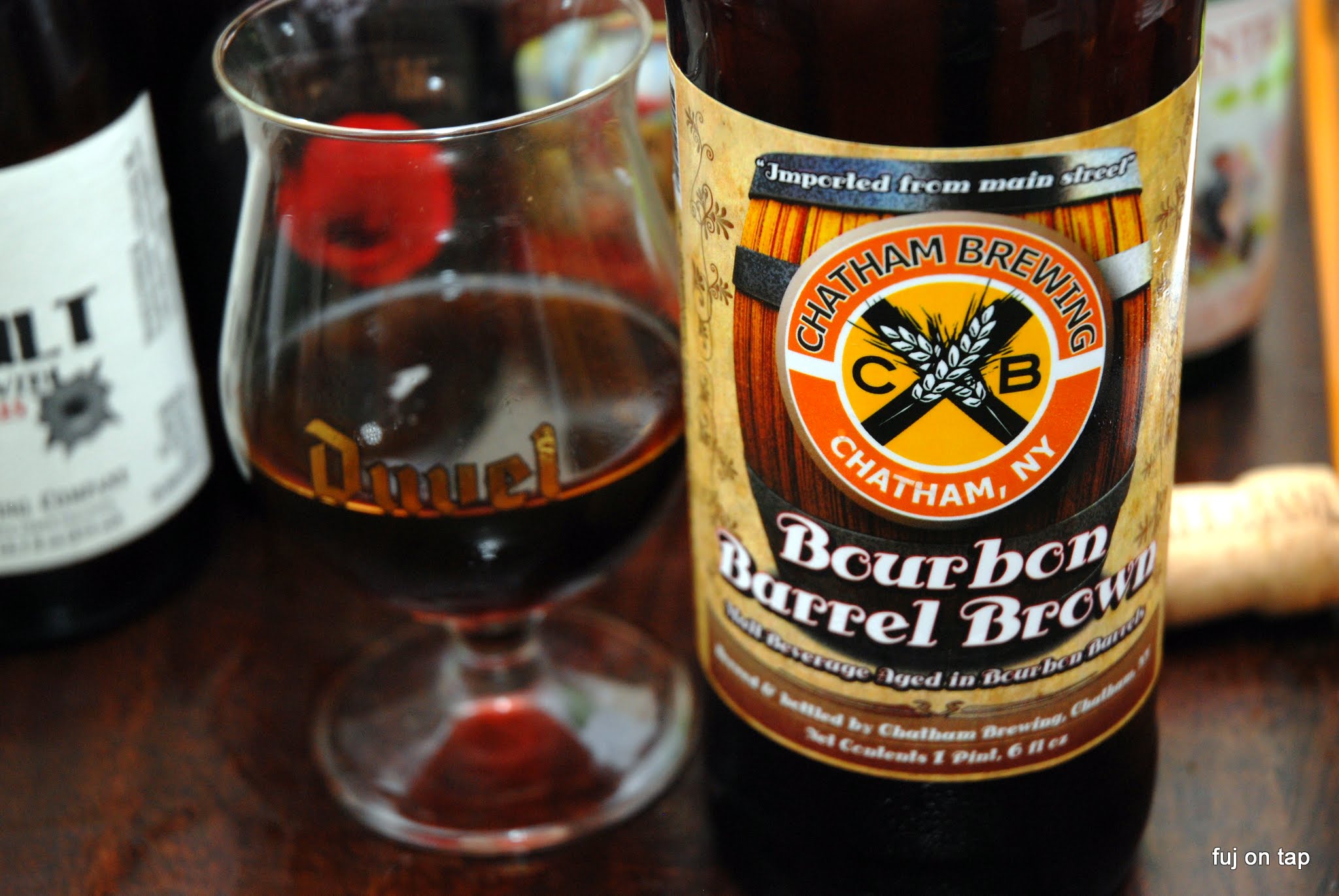 END_OF_DOCUMENT_TOKEN_TO_BE_REPLACED

TAP was pretty laid back this year for me. Long gone are the days of going full retard at a beer fest. I checked out the beer list on The Foaming Head and made a plan of action before even heading to the event. I made a small list of wants and sipped sparingly on the few beers on the beer list that I haven’t had yet. There’s really no point in drinking every beer under the tent when most of them are something you’ve had before or something that doesn’t interest you. TAP NY still has plenty of new breweries and new offerings from past attendees to make the trip worth it, though, plus the drive, the views and the food make it one of my favorite beers festivals in New York (a close second to Ommegang’s Belgium Comes to Cooperstown). There were a lot of great beers there that day but the most memorable for me were the Southern Tier Bourbon Barrel Aged Backburner, Keegan Super Kitty and the Spider Bite Boris the Spider.

Southern Tier BA Backburner was absolutely phenom. I had at least three pours of it throughout the day (spaced pretty evenly, it clocks in at 14.1% ABV). I’m a huge Southern Tier fan, I’ve had most if not all of their beers, and have even made the 6 hour trek to their brewery in Lakewood, NY this past winter. This is by far the best beer I’ve had from them, and the best beer at TAP NY for me.

I’ve been to Keegan’s more times than I can count and it’s a regular stop when the boys make the trek to the Palisades Mall to see a movie in full IMAX glory when that retrofit bullshit at Crossgates won’t do. Still, after all of those times I’ve been I haven’t seen Super Kitty on tap at the brewpub. The last (and only) time I’ve had it was a tasting while at the Peekskill Brewery and walked away less than enthusiastic. The flavor was off. It may have been the keg or the line but whatever it was it wasn’t good by any means. When I saw it on tap at the Keegan’s booth I knew I had to try it. The (unlisted) Black Eye Black IPA was on tap which I’ve enjoyed in the past but since I’ve had it before I really wanted to give Super Kitty another shot. The second try was light years better. This is as good if not possibly better than Joe Mama’s Milk for me, and that’s saying a lot since sweet, slightly fruity beers like this aren’t really my thing. I went back for seconds later on but the line just about stretched out the door. Another time perhaps.

Lastly there was the Boris the Spider Russian Imperial Stout from a new brewery called Spider Bite Beer Co. in Holbrook. Russian Imperial Stout is one of my favorite types of beer and with it being one of (possibly the only) RIS at TAP NY I beelined there for my very first taste of the day. The beer was fantastic and if their other beers are as good as their stout they definitely deserve the F.X. Matt Memorial Cup they took home this year.

Other than hawking the kitchen for waiting when corn dogs were coming out*, the last hour of the day was spent hanging out and watching the individual craft beers being judged and the announcement of the medal winners. I’ll have a second set of pictures from that in a post later.

The rest of my pictures of the first part of the day can be found here.

*For some reason corn dogs, not beer, are the most sought after commodity at TAP NY. Go figure.

After the kicking back a few of Chatham’s brews during the previous night’s dinner at New World Bistro Bar, I knew just the place to go to do some growler fills for a party Elise and I were going to later that night. I’m not usually the type to stick to one single brew throughout the the night, but their Imperial IPA was just too good not to.

Chatham Brewery isn’t that far away, maybe 40 minute drive max. We loaded up the car with the pooch and were on our way. Going by the street address, we were kinda lost. We found the location, walked up a flight of stairs and found ourselves looking at pretty business like office space; this definitely wasn’t a brewery. We found a door that had the Chatham Brewery symbol on it, which directed us to the back if no one was around. Looking out back we saw a couple of garages and some folks hanging out so that’s where we headed.

The brewery wasn’t much to look at but that’s kinda the point of this place, isn’t it? It’s a true microbrewery, AKA small brew, small batch operation, brewed in basically what amounts to a garage. Every beer geek’s dream, right? And I think it’s great. They do some awesome beers and deserve every bit of the cred they’ve been receiving recently.

We tasted several of their beers that day, while the brewer Matthew Perry showed us around their facilities. Pretty impressive they output the amount of beer they do in such a small space. The ONE time I’d actually want my 18-135mm lens because I didn’t have much room to backup and take a shot of the whole thing and and I didn’t even have it.

Even though I just had their Imperial IPA the night before and tried and enjoyed the beers I had that day, I knew I needed another growler of it since it was just too damn good not to. Just look at that insane lacing on a plastic cup. I was once again seriously impressed. Elise had a tough time decided between the Maple Porter and the Stout but ended up with the Stout. (The stout went over well with the non-beer nerds at the party that night. The DIPA? Not so much.)

We spent about 45 minutes hanging out and BSing with the brewer and tasting beers. It was pretty cool since you usually don’t get that kind opportunity often. I didn’t want to keep him long since I knew he was heading up to TAP NY later on that day, where they ended up taking home the Vassar Cup for best Brewery in the Hudson Valley. (Congrats!).

I’m keeping an eye out on Chatham Brewing and will definitely get some growlers filled there again. They got some barrel-aged beers with barrels sourced from a local distillery I absolutely cannot wait for.

What can I say? Another amazeballs meal from the grey matter of Chef Ric Orlando. I can’t say enough about how much I love this Chef and his menus. After going to the Hell Dinner at Brewery Ommegang I knew that I wanted to take Elise back to New World Bistro Bar for our anniversary.

NWBB is one of those kind of places that has sooo much good food on their menu it’s almost a shame to just order a main for each person. You’re better off getting a bunch of little plates. I’m slacking on a few posts so I’m going to make this quick. The menu for the night:

Beer or the day for me was “NWBB Etherial Imperial Double IPA” brewed by Chatham Brewing. This was so good that it prompted me to drive down to Chatham Brewing the next morning and pick up a couple of growlers before they headed to TAP NY. More on that later.

I don’t think I have to say this again, but if you haven’t had something by Chef Ric Orlando just go to New World Bistro Bar or New World Home Cooking and have a life-altering dining experience. Now. Thank me later.