Few Pics from Dogfish Head Night at The Ruck

— Dogfish Night is always a great time. I got to tick almost all of the beers they had that I haven’t checked into in Untappd yet (missed three but we were hitting the road for yesterday’s Hill Farmstead haul pretty early). Dave knows how to put on a great party. I spent the majority of the night enjoying myself so only a few pics were taken. Check ‘em out!

Dave (owner of the Ruck) and Jay from Jay’s Beer Review. 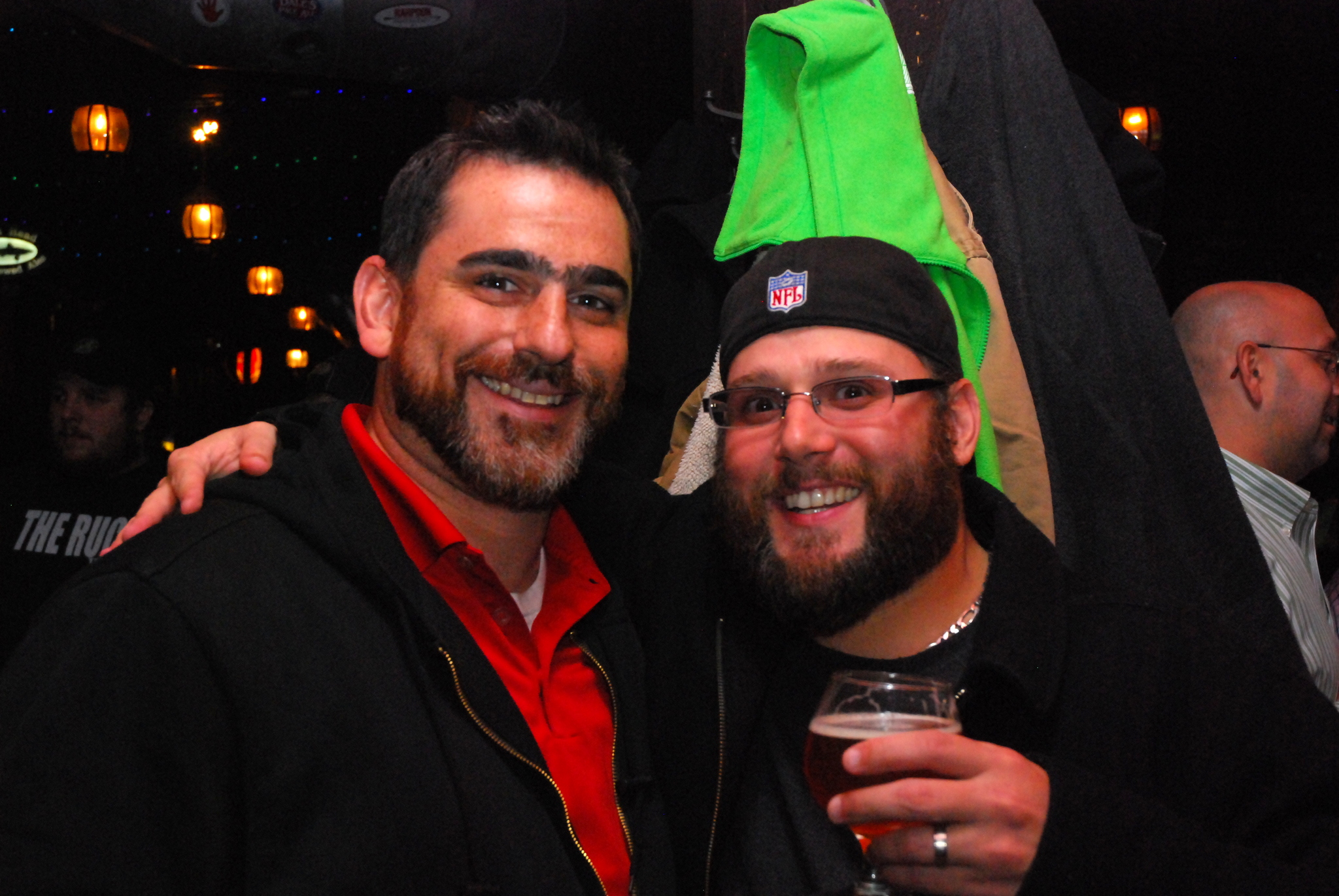 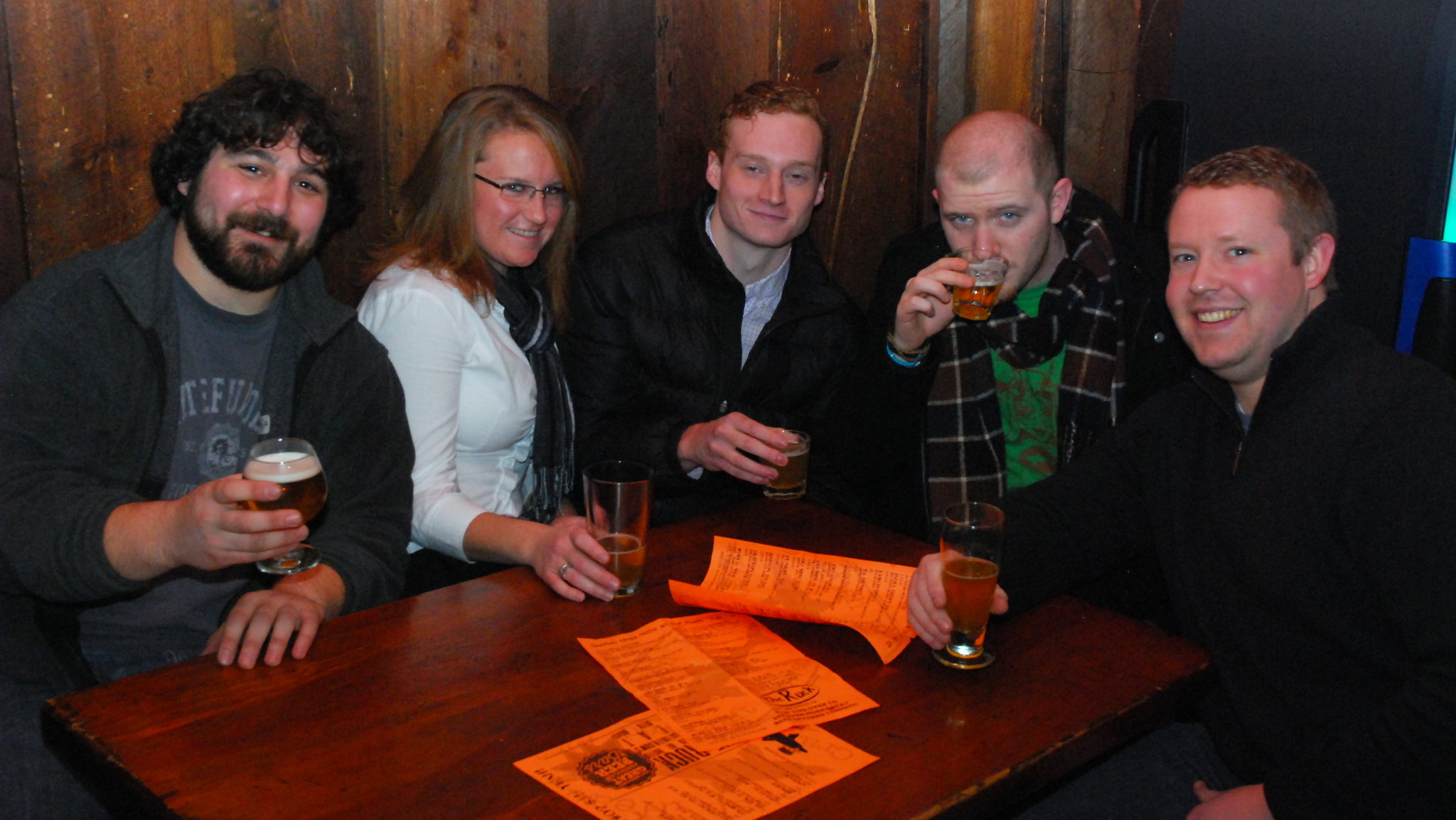 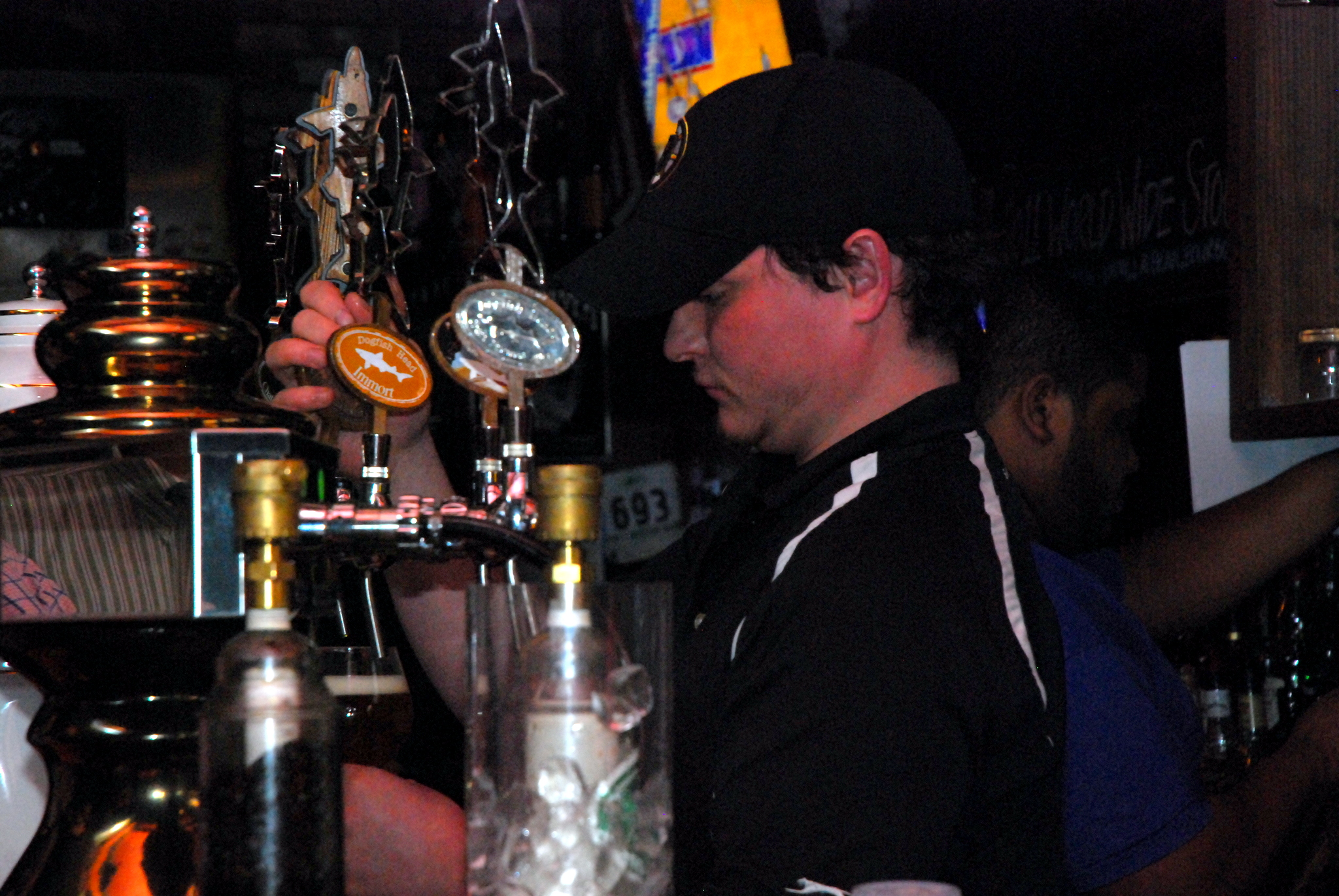 Ev holding it down 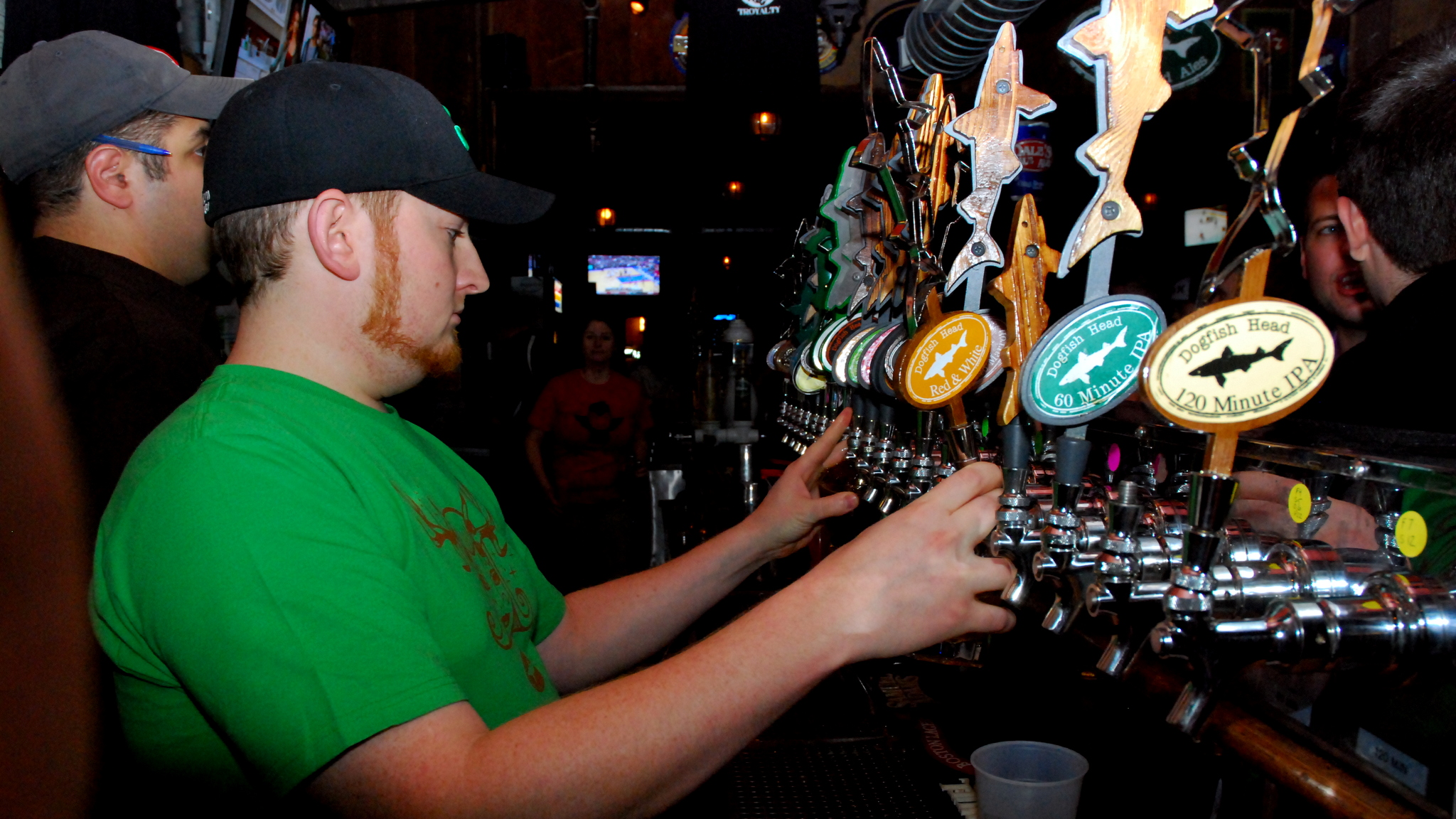 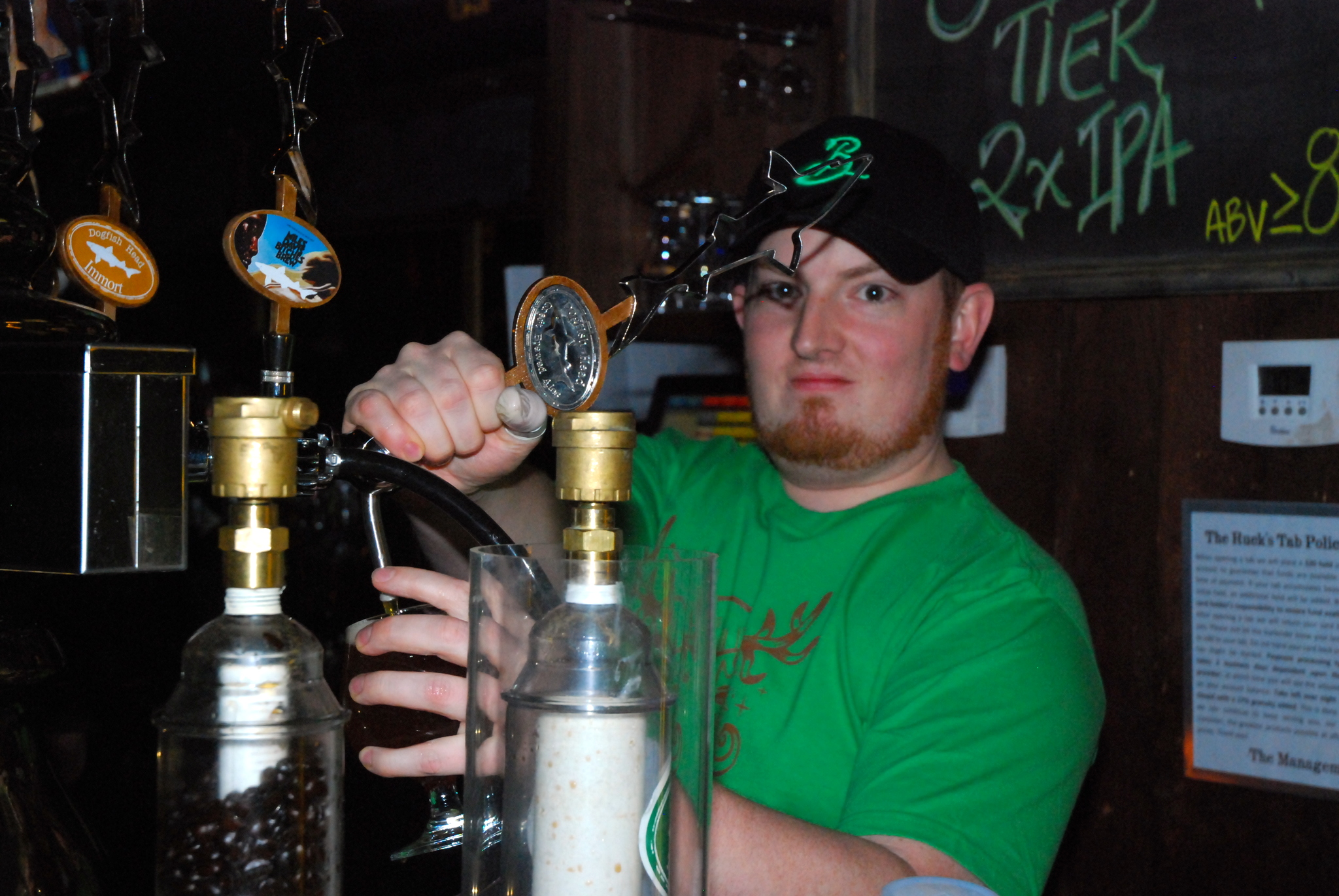 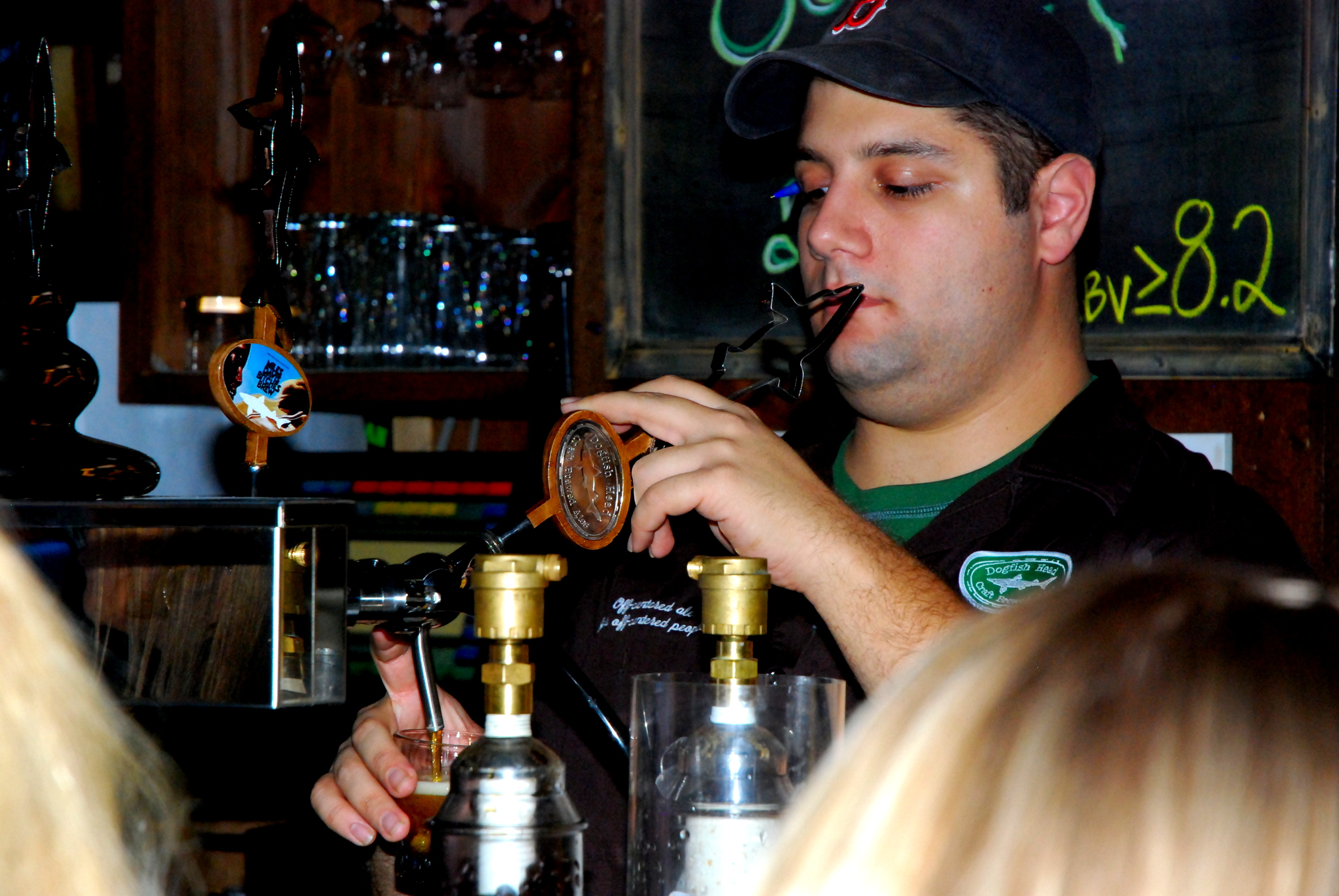 Buff doing some sort of sign language. Not sure. 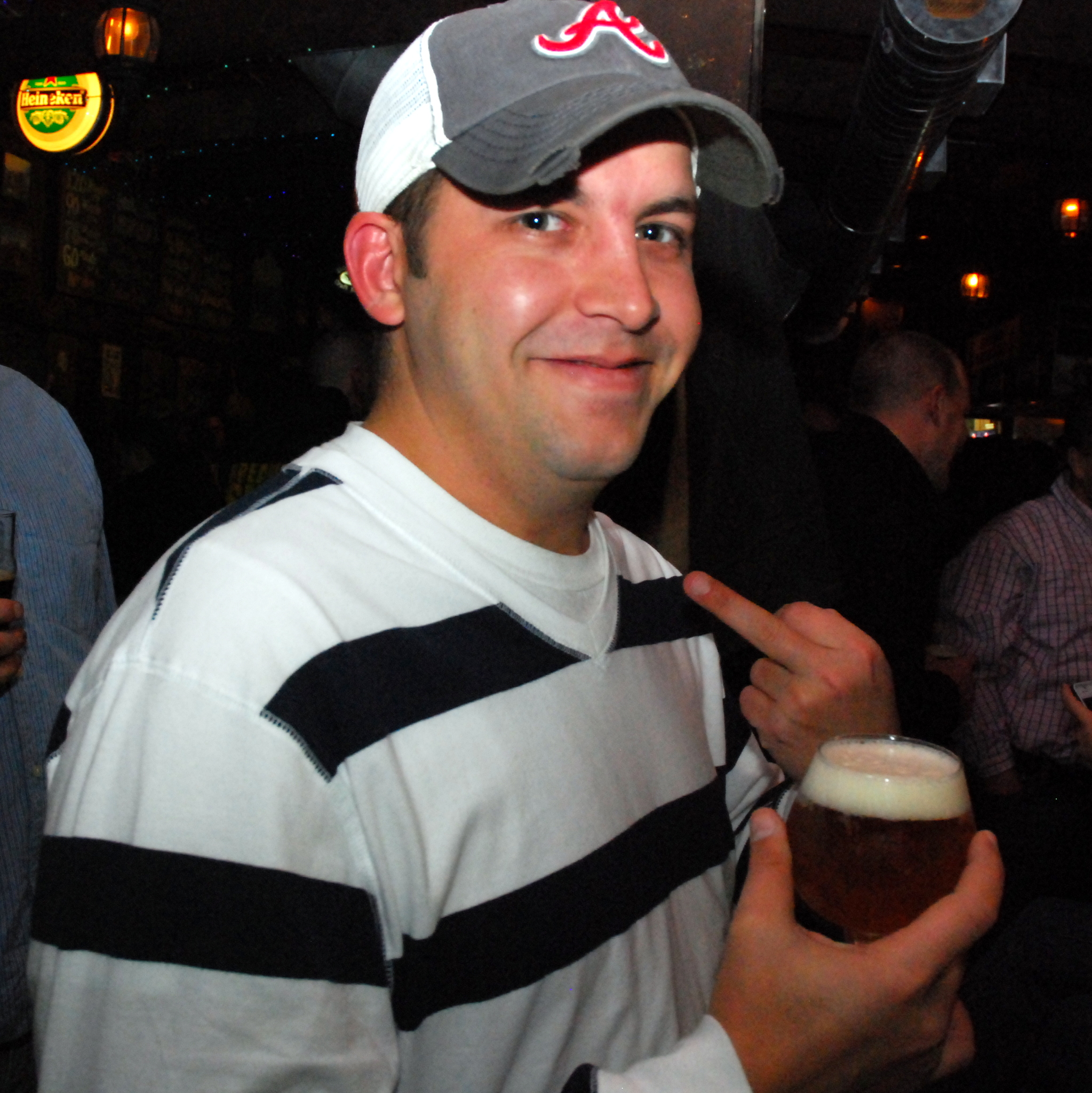 Erica and Elise making sure the bar isn’t going anywhere. 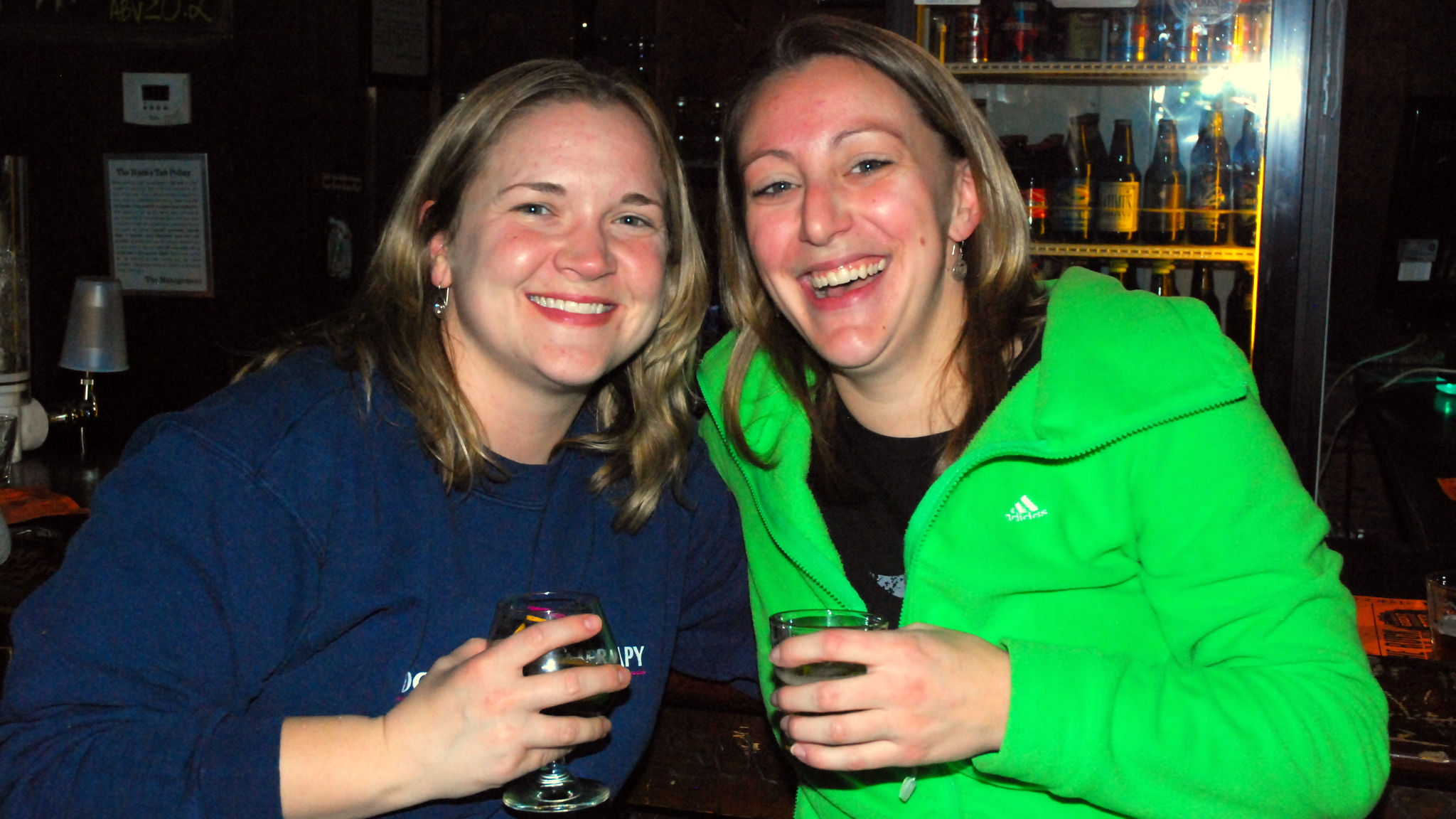 Caleb sadly not making me wings hot enough to make my nose bleed. 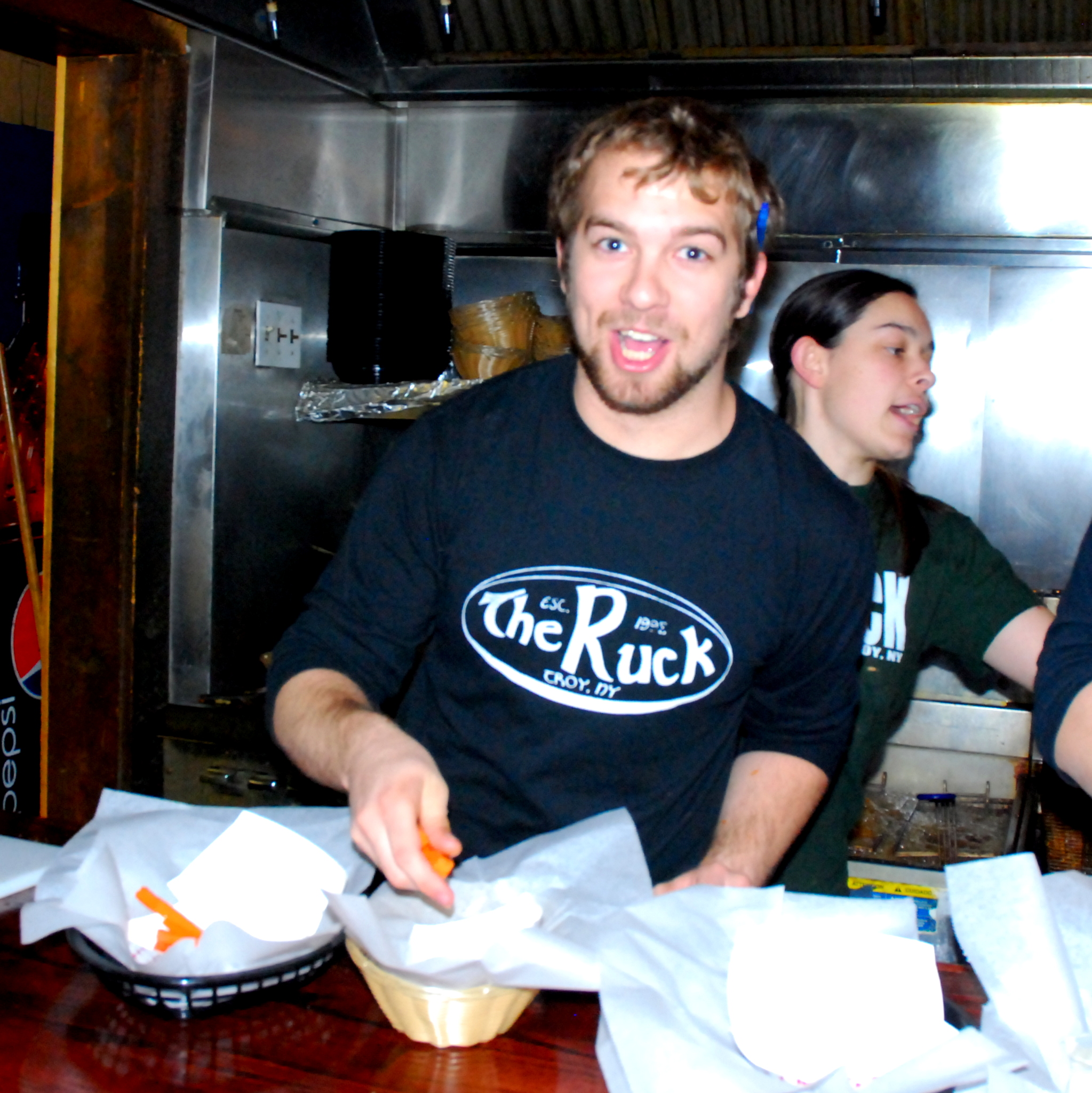 Dogfish Head shortbread cookies made from the tap handle! 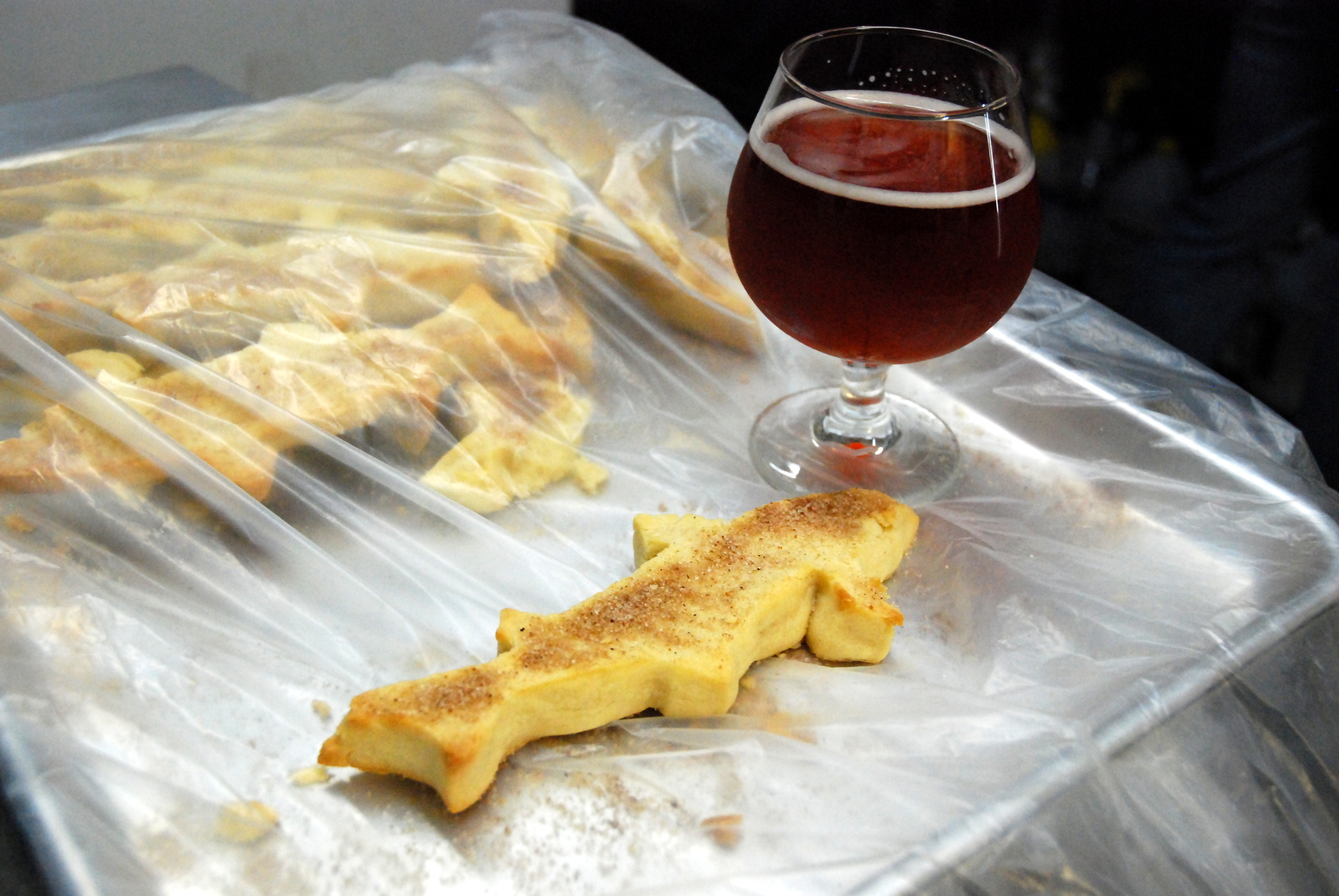 I… don’t know. This was their idea. I swear. 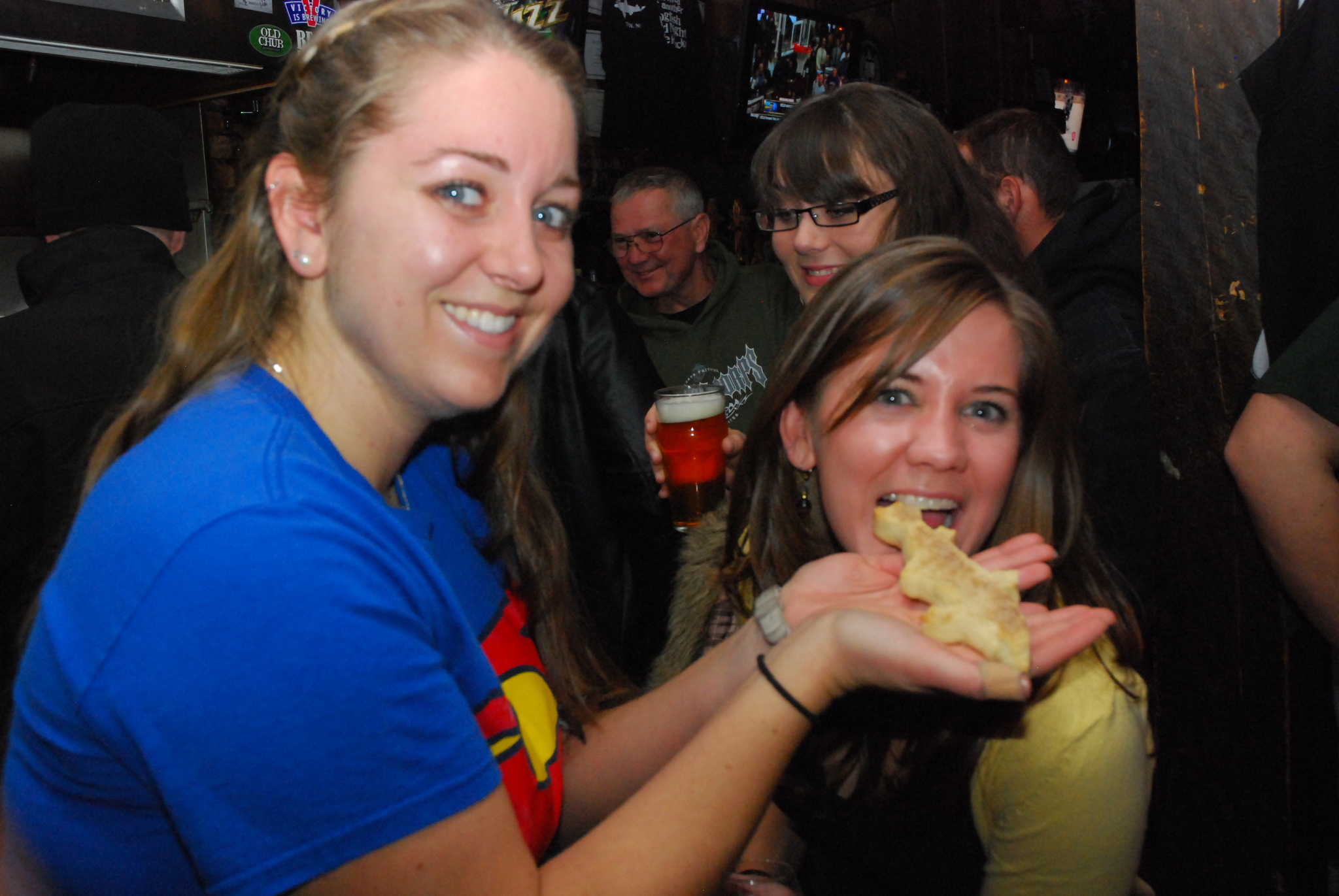 Matt, the head brewer of Chatham Brewing, Russ from Homebrew Emporium, and Bob from the Ruck. 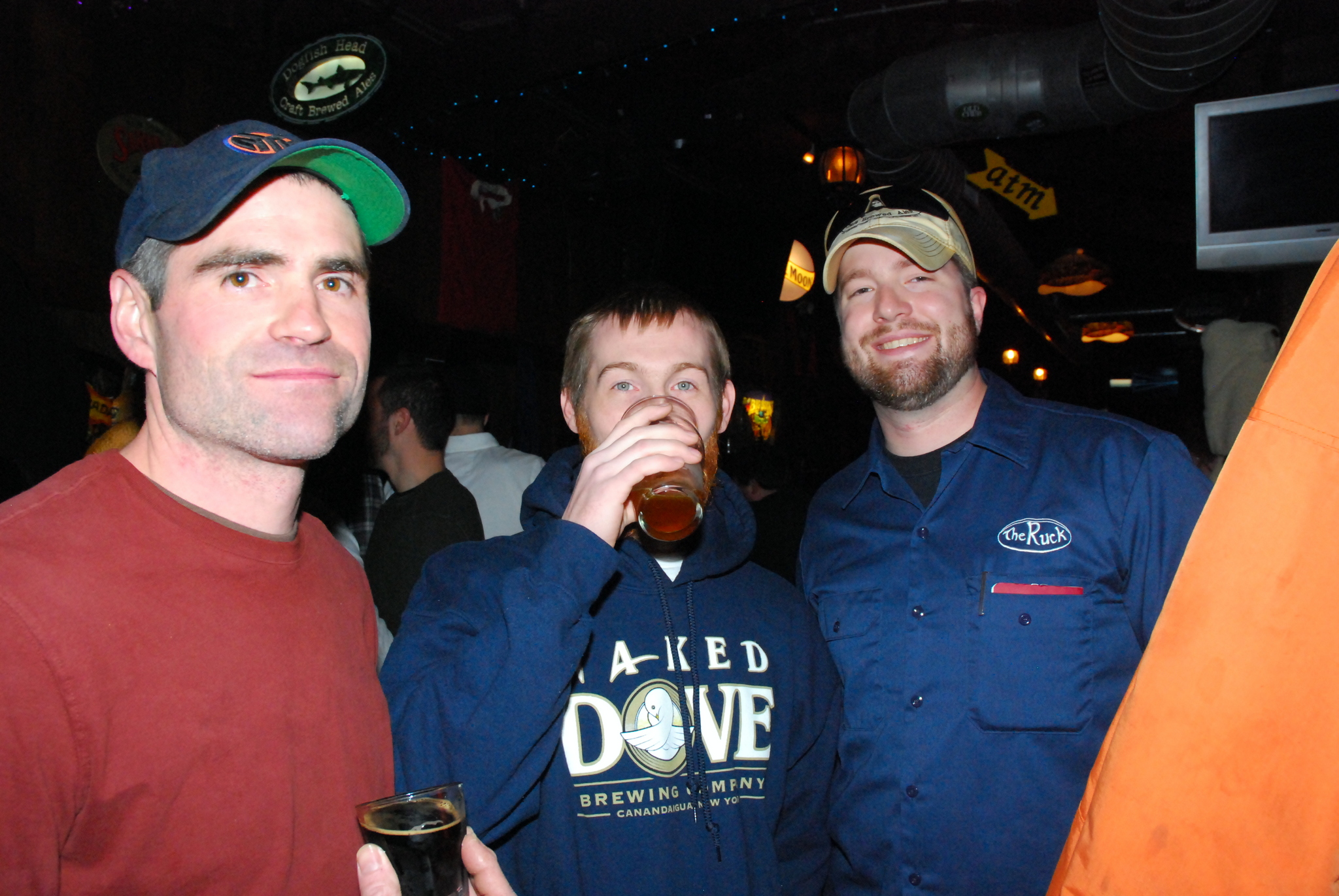 Sad looking Randall all out of World Wide Stout. :( Gotta get there early! 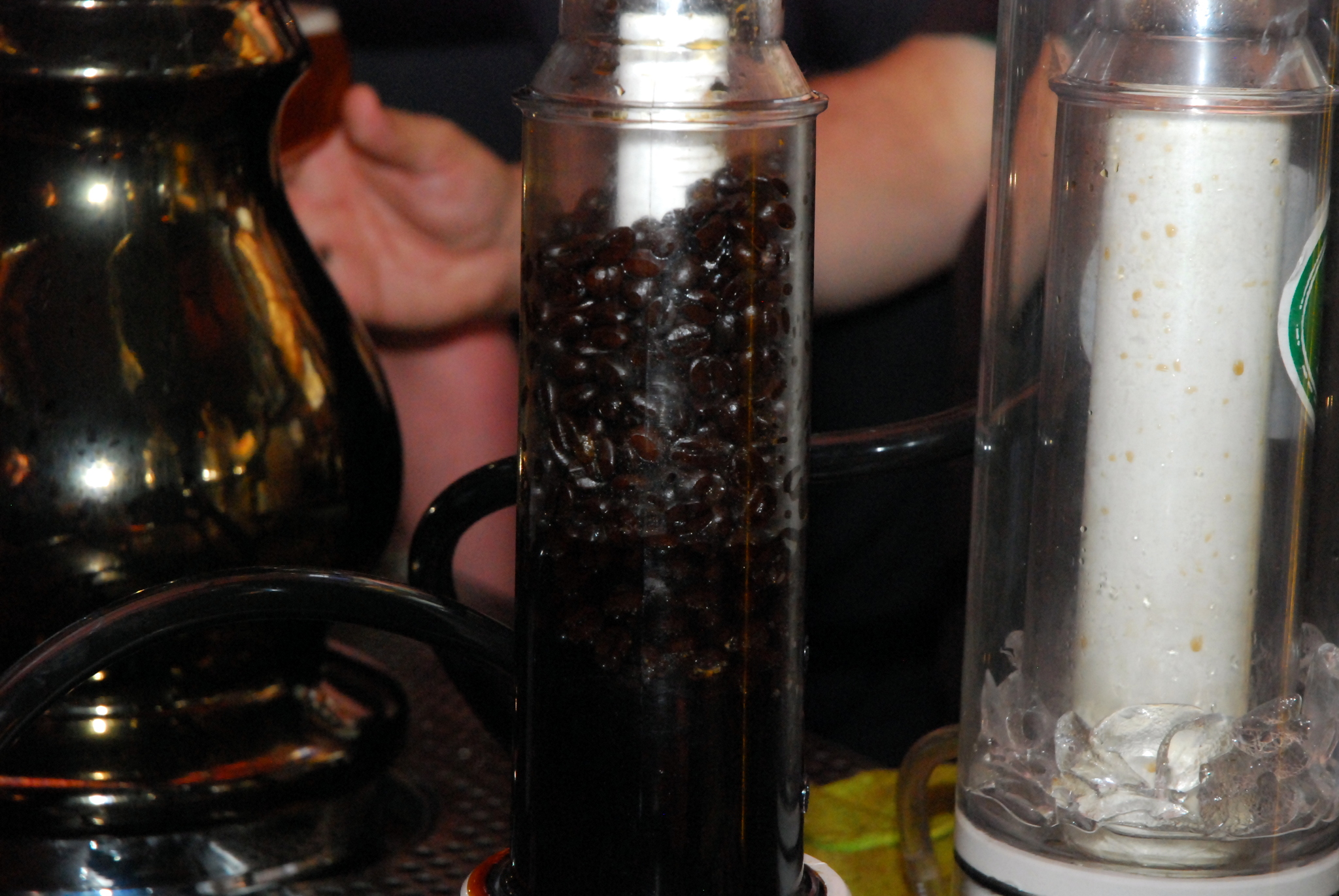 — Got this response about their November 16th event via their Facebook this morning:

I’ll update if I hear anything about casks, Randalls, build your own Randalls, etc.

—  Told you guys I was doing this. See you at The Ruck for 30 Days Til Dogfish Head Night.

— A little preview of what they have in store for the big Dogfish Night on November 16th. Make your own randals are a great idea. Me? I’d do cocoa nibs, vanilla beans, cinnamon sticks and dried chili peppers on World Wide Stout. Sound like a familiar recipe? It should. That’s what they put in Hunahpu.

Bonus points for whoever Randalls the weirdest shit tomorrow night.

On the hot side, Rhizing Bines will go through Dogfish’s signature continual-hopping process with floral and citrusy Bravo hops. On the cold side, it will be dry-hopped with an experimental varietal so new it doesn’t yet have a name, just a number: Hop 644. A component of Sierra Nevada’s aroma-boosting Torpedo system will make a pit-stop in Delaware for dry-hopping duty before it heads to Sierra’s new North Carolina brewery.

Dogfish Head and Sierra Nevada are standbys in the IPA world, with DFH landing in BeerAdvocate’s Top 50 DIPA’s with 90 Minute and Sierra Nevada in the Top 50 American IPAs with Northern Hemisphere Harvest Wet Hop Ale. I look forward to this beer coming out, although February is an odd month to release a DIPA.

– Gotta have the right soundtrack to drink a shit ton of craft beer to.

The last foggy stop of the night was Eataly. Well, it was supposed to be the roof-top beer garden Birreria, but they were too busy to let us up there and took our names and number instead. Or we were just visibly drunk and they didn’t want us up there. I’m going to go with the former.

Right around the corner was the beer section of the Market. Not surprisingly there was a fair selection of Dogfish Head beers, some easy to get a hold of, some rather difficult. The one that stood out the most was Urkcontinent, the DFH /Google collaboration beer that hit DFH’s brewpub last fall but hasn’t made it to bottles until recently. After purchasing it, we asked if there was a place where we could crack it open and we were told we could grab some glasses and shop around, but tables were for eating guests. Totally fine with us.

We “found” some wine glasses and a table in the market by La Pizza and started pouring. This beer was fantastic. The past couple of new DFH beers I’ve tried have been kinda let downs (ta henket, Tweason’ale), and this one completely blew my mind. the coffee and chocolate notes are outstanding. I’ll admit that at this point I was three sheets to the wind, but we still all collectively enjoyed this beer. Definitely picking one of these up when it hits the Capital Region.

We still had some time to kill so we grabbed another two bottles from the fridge: Black & Blue and Sah’tea. We drank these and bullshitted and chatted with guests and shopped. It was an amazing time, probably better than actually making it up to Birreria. I picked up some pasta, some of “the stinkiest, nastiest, smelliest, feetiest” cheeses they had available, along with some aged prosciutto and some dessert to go. In my drunken stupor, NONE of this made it home on the train with me, which is a huge disappointment.

So Eataly was a great time. But I didn’t really get to experience Eataly since we kinda took an unconventional approach to enjoying our time there. I will be back (with Elise in tow next time) to enjoy all of the delicious beer and Italian food to the fullest.

Troy, NY: Preview of The Return of Dogfish Head Night at The Ruck [#DFHNight]

Quick little preview of what’s in store for The Return of Dogfish Head Night for those who haven’t made it in yet. I stopped by this morning around 11 and grabbed some of the rares and will be back to party later on. Don’t forget DJ Jared Kingsley starts at in a few short hours!

After checking out my Dogfish Head Night Beer Stats spreadsheet I put together this morrning, I settled on these for my morning/afternoon libations (all 5-10 oz tastings):

That’s all for now. I’m taking a little breather until the rest of my crew shows up later on tonight. Met a lot of new folks from my various beer forums and social networking websites today, hopefully I’ll meet a few more tonight. See ya then!

Knew I had to hit up Table & Vine on the way home from Worcester today. I’ve heard plenty about it from friends and BAers alike. This place is dangerous for my wallet! Didn’t pick up anything too fancy but they have plenty here I haven’t picked up yet locally or just can’t get here in general. Prices are very reasonable.

Today’s Payload (from left to right):