Worthy Burger, located in a old freight house alongside the railroad tracks in South Royalton, VT has been on my radar for awhile now. The premise behind owners Dave Brodrick of Blind Tiger fame (which has a cult-like following in the craft beer community) Jason Merrill and Kurt Lessard’s business is simple: pair wood fire grilled grass fed burgers with locally source Vermont ingredients and homemade condiments, with a side of beef tallow fries all for a reasonable price. Top that off with a great selection of craft beer from Lawson’s Finest Liquids, Hill Farmstead and other Vermont and New England breweries and you have a sure winner on your hands.
END_OF_DOCUMENT_TOKEN_TO_BE_REPLACED 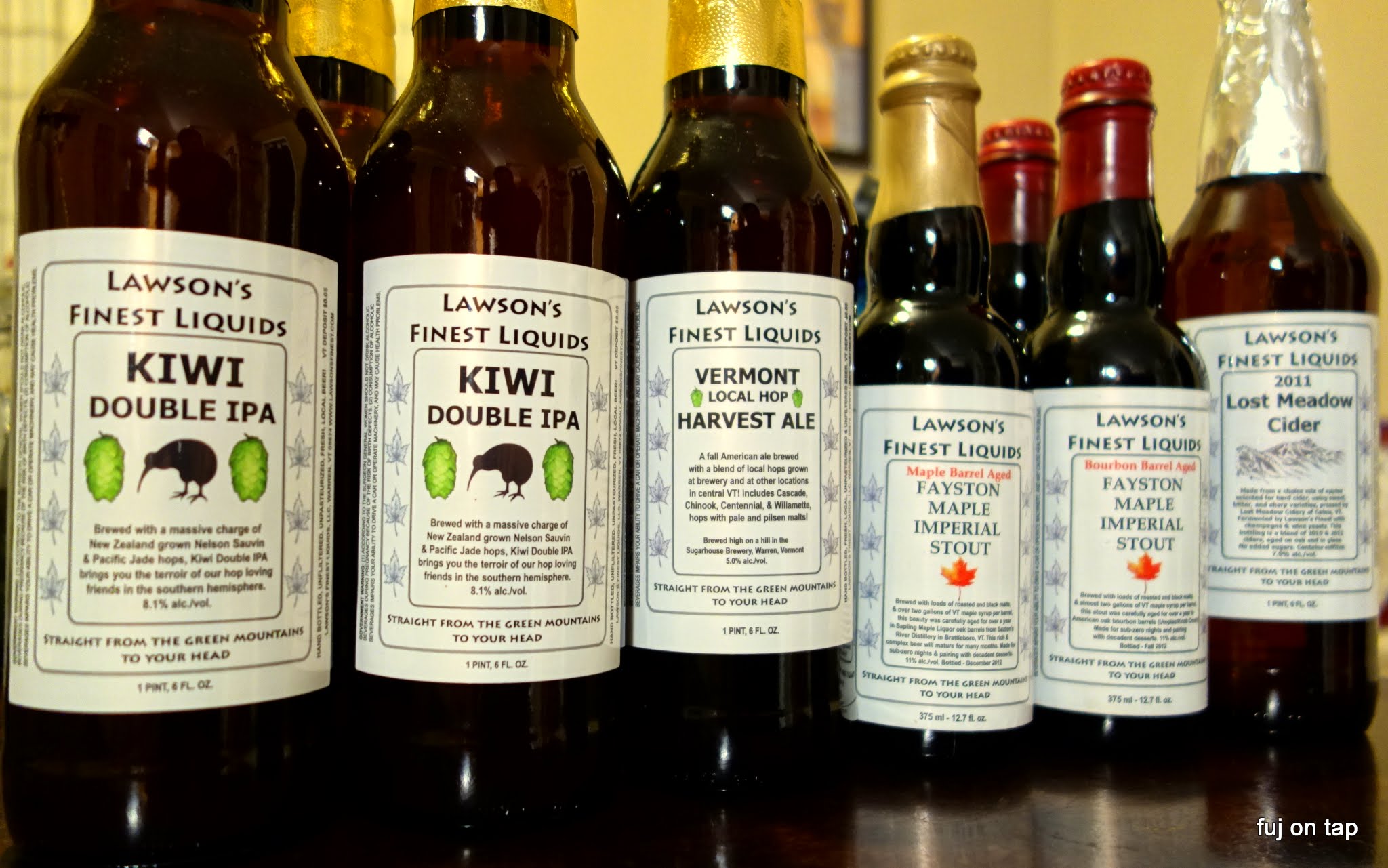 Couldn’t make it to this weekend’s Lawson’s Farmer’s Market. Luckily, Adam was going and I was able to mooch off him and get a few bottles I was looking for. No complaints there. Thanks Adam!

Our dear friend and neighbor to the south is bringing the goodness and we’re going to go all day with it. Noon to Midnight! Here’s the lineup……

Damn, that’s a tasty lineup. Plenty of beers on there I haven’t ticked. Pretty nice excuse to make your way up to Waterbury if you haven’t been in a while. Since let’s say, the Hill Farmstead Harvest Festival.

— Our time at the Prohibition Pig was quick, but effective. We really needed to get going to our dinner reservation at Hen of the Wood, but we couldn’t help but grab a few libations across the street after our drinks at Prohibition Pig. There was definitely some overlap in the in the beer menu compared to Blackback that made the Pig lose some of it’s luster from when we were there on Independence Day, but we still had some fine drinks while we were there.

Considering the Cannery was out of beers before we even got into town, some Heady Topper on tap was a must. 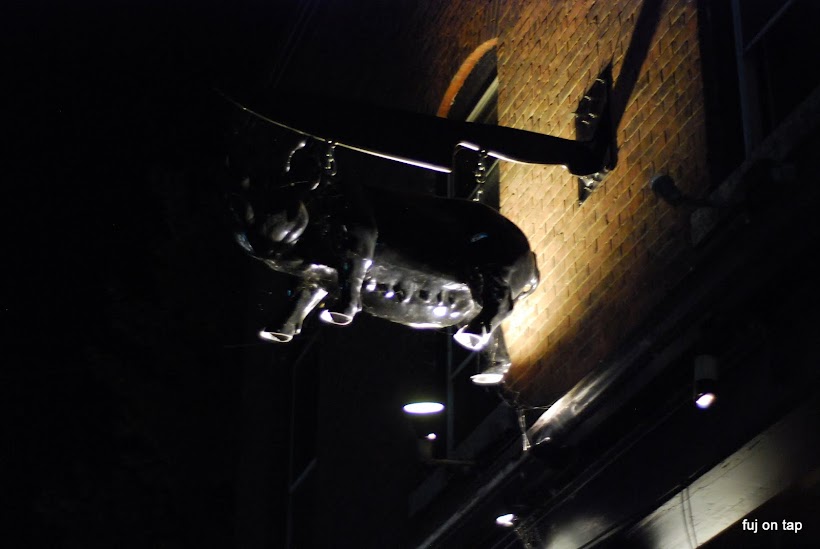 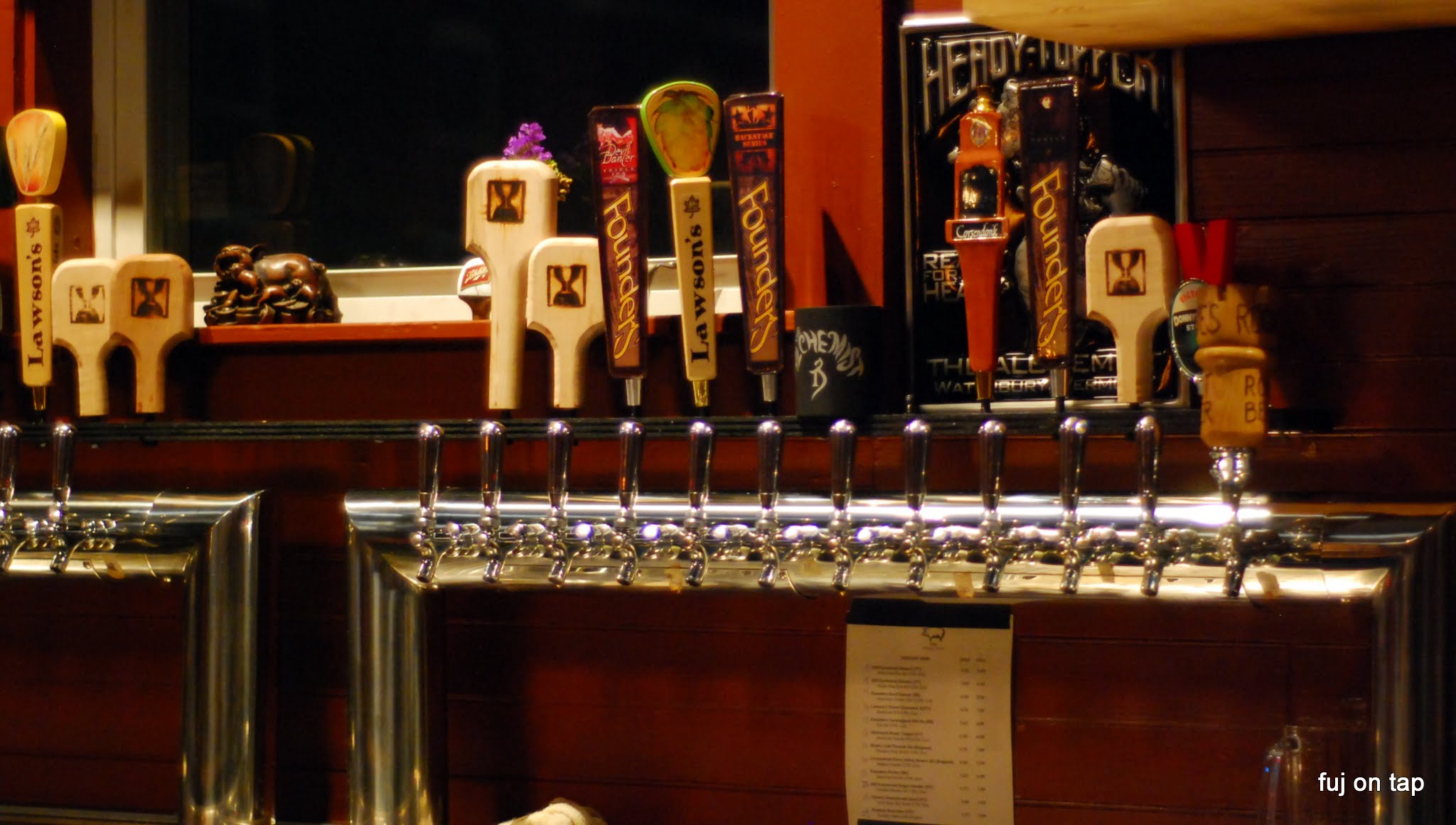 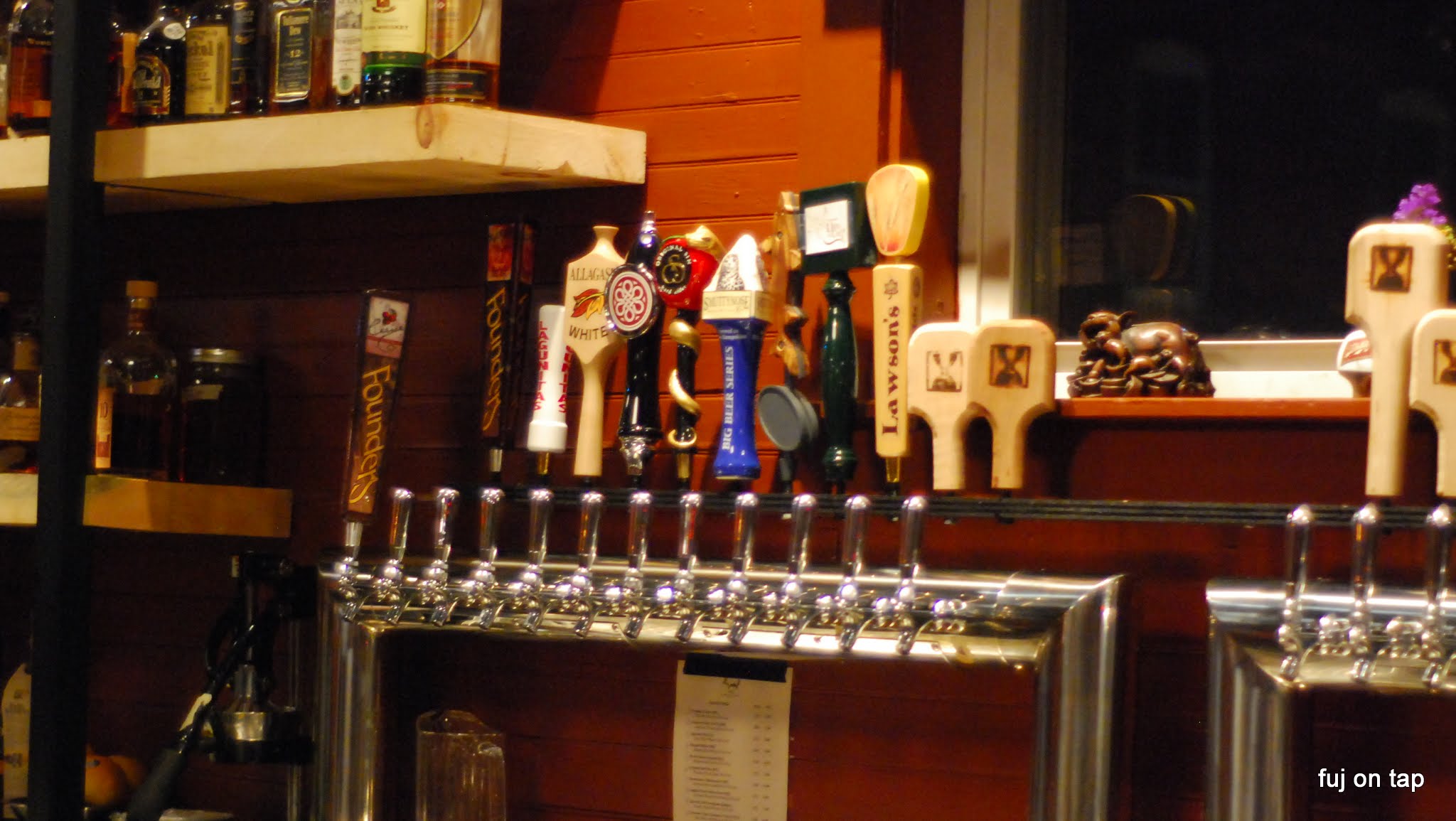 As I said, our stay was cut quite short as we had to get to Hen of the Wood. We really need to get back here and give one of their main BBQ dishes a go. If it’s anything like the VT Cuban I had the last time, I know it will be exquisite. 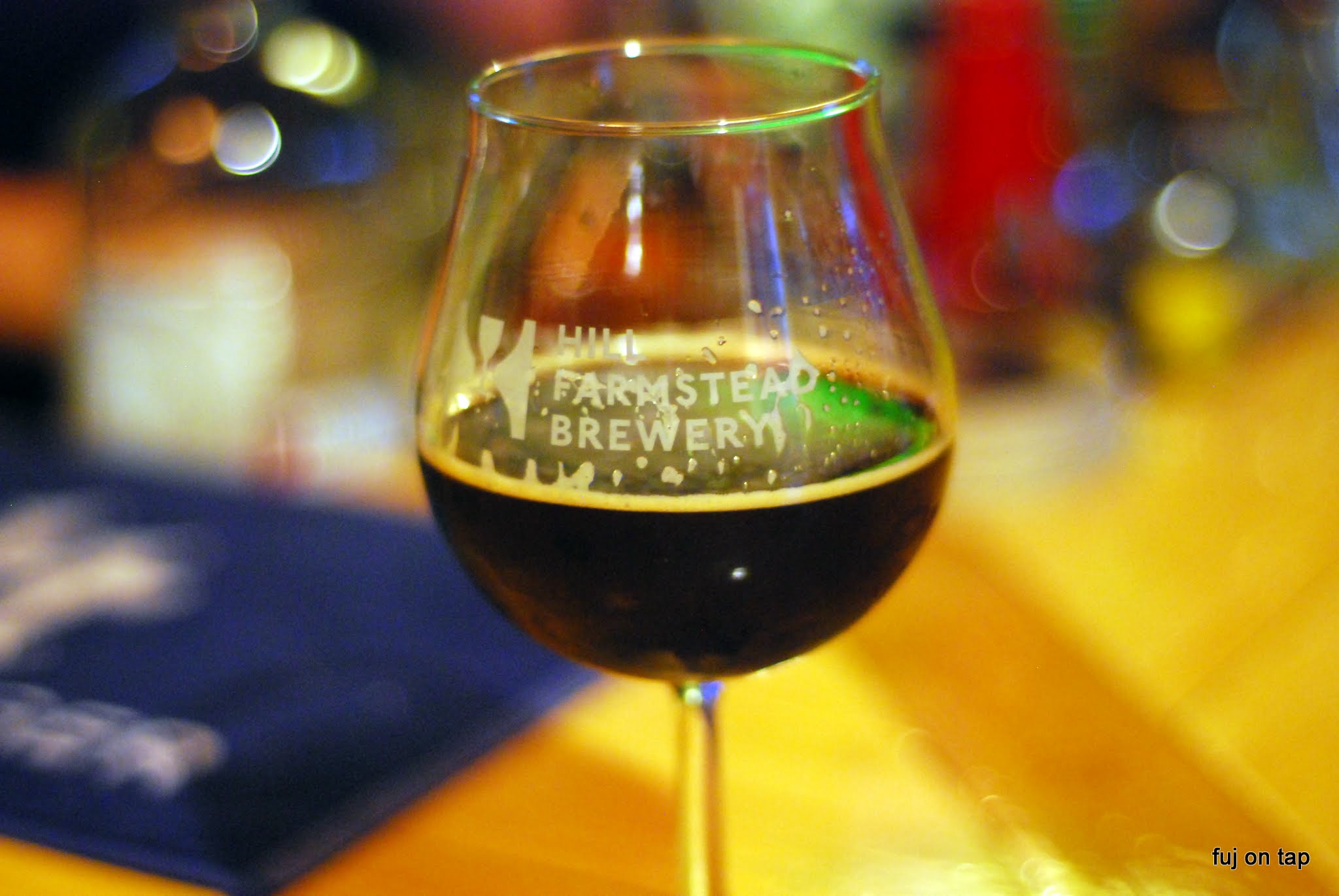 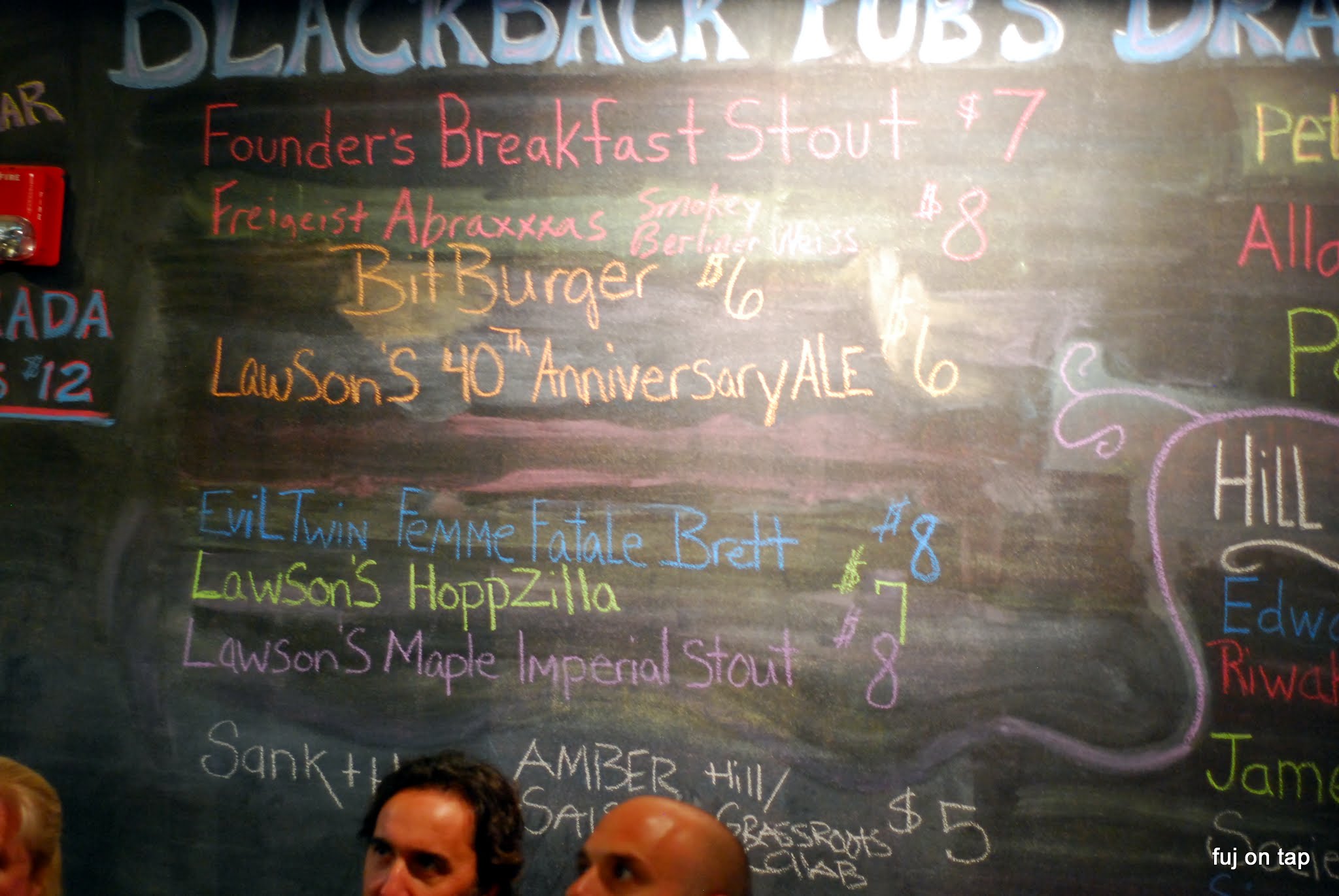 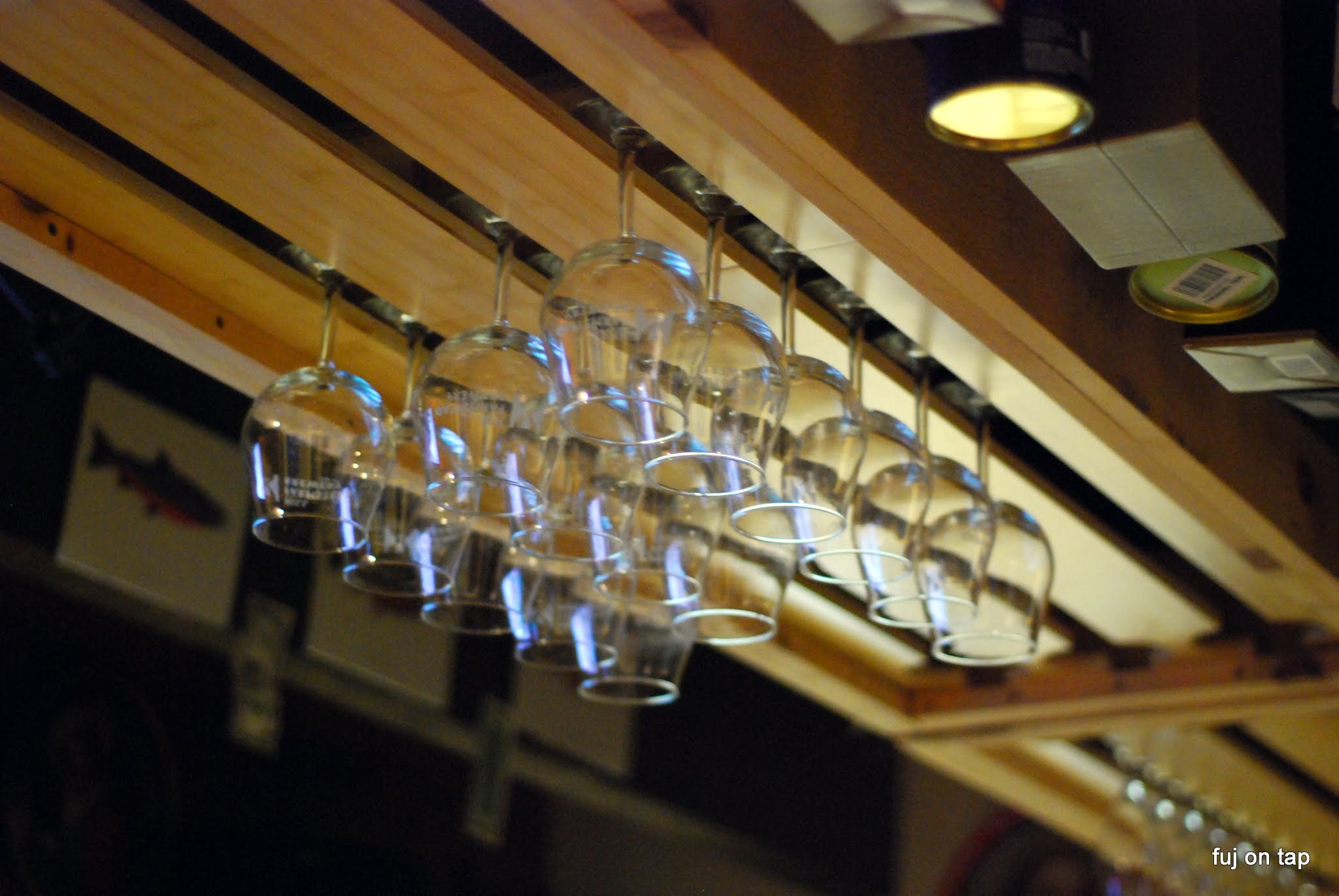 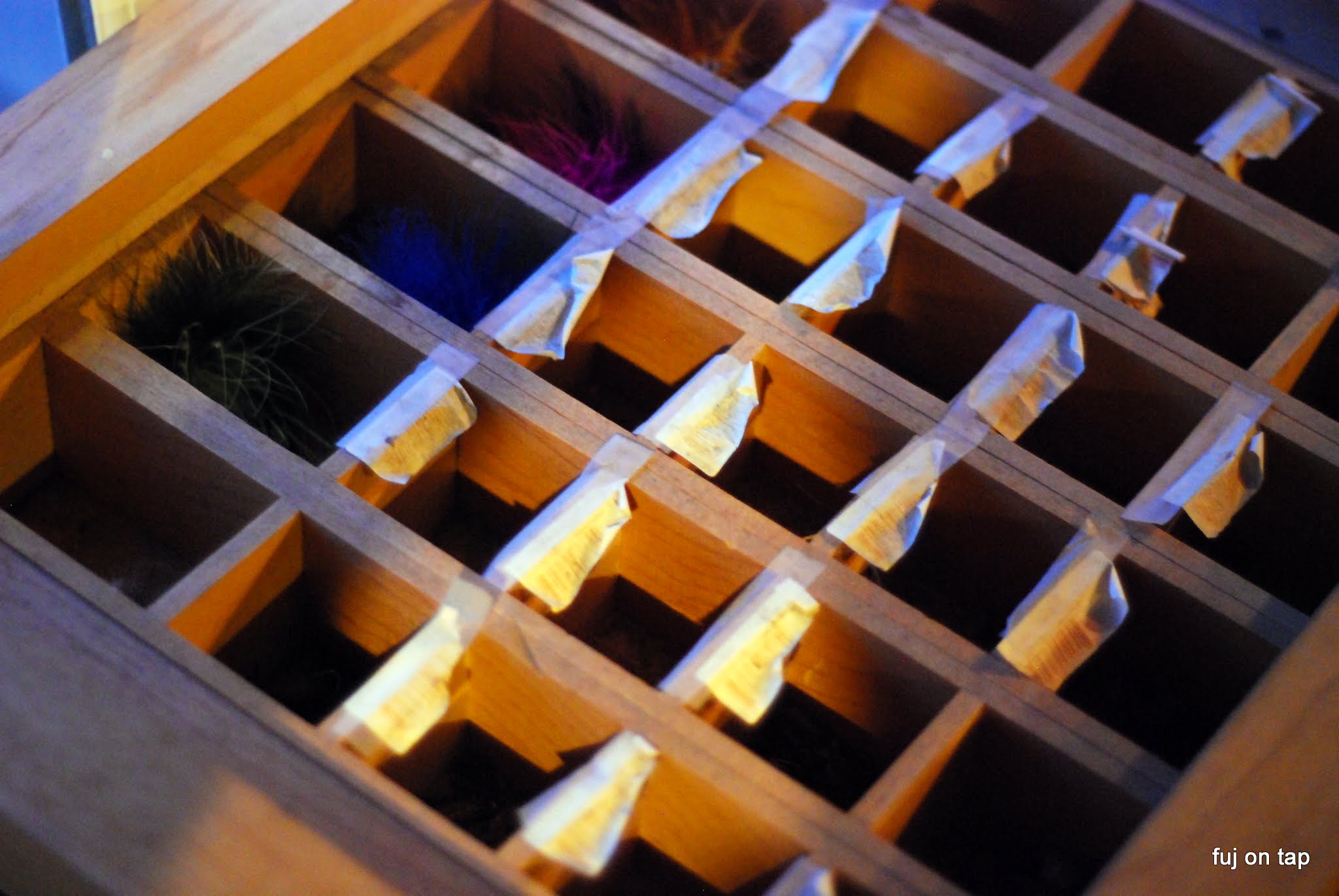 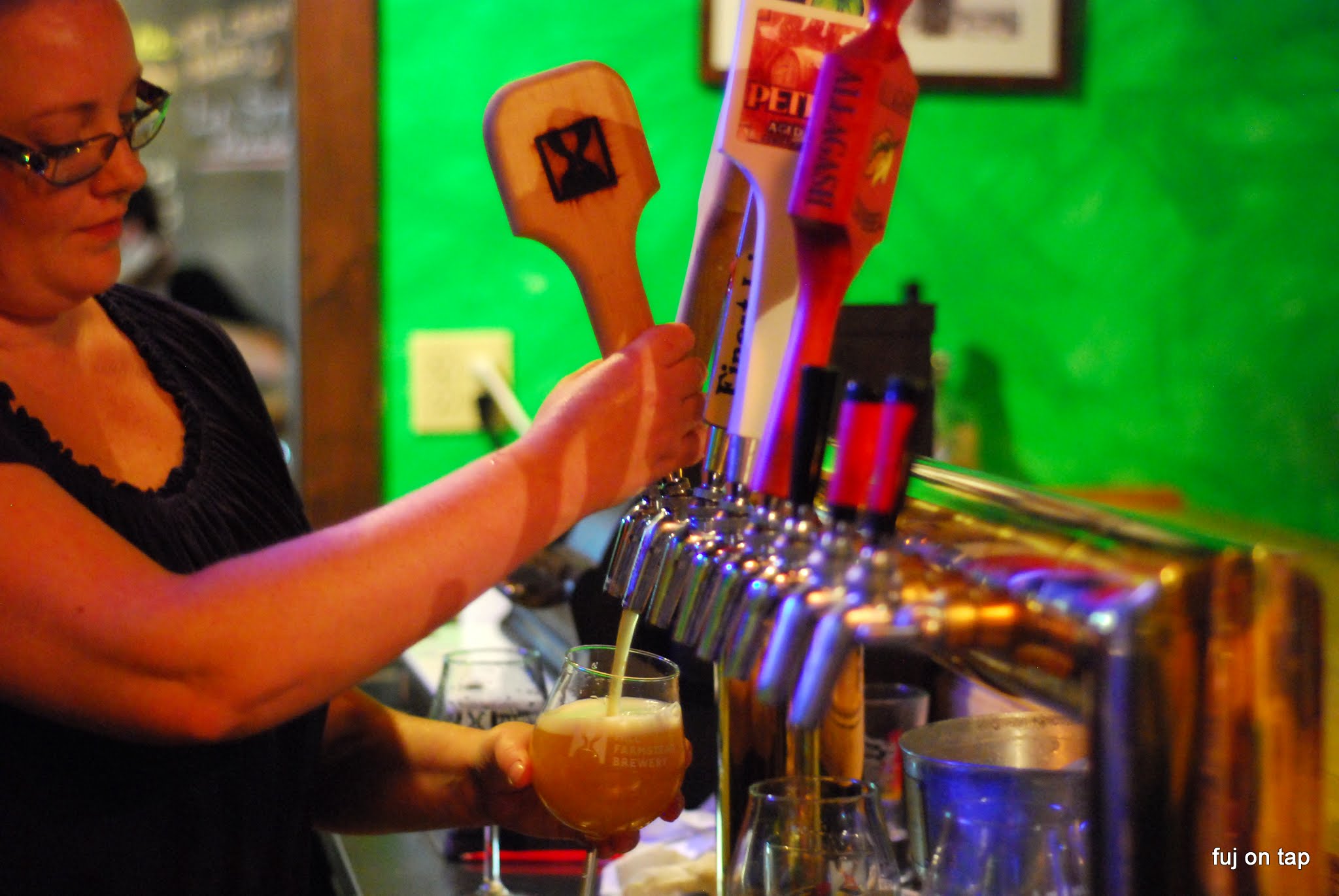 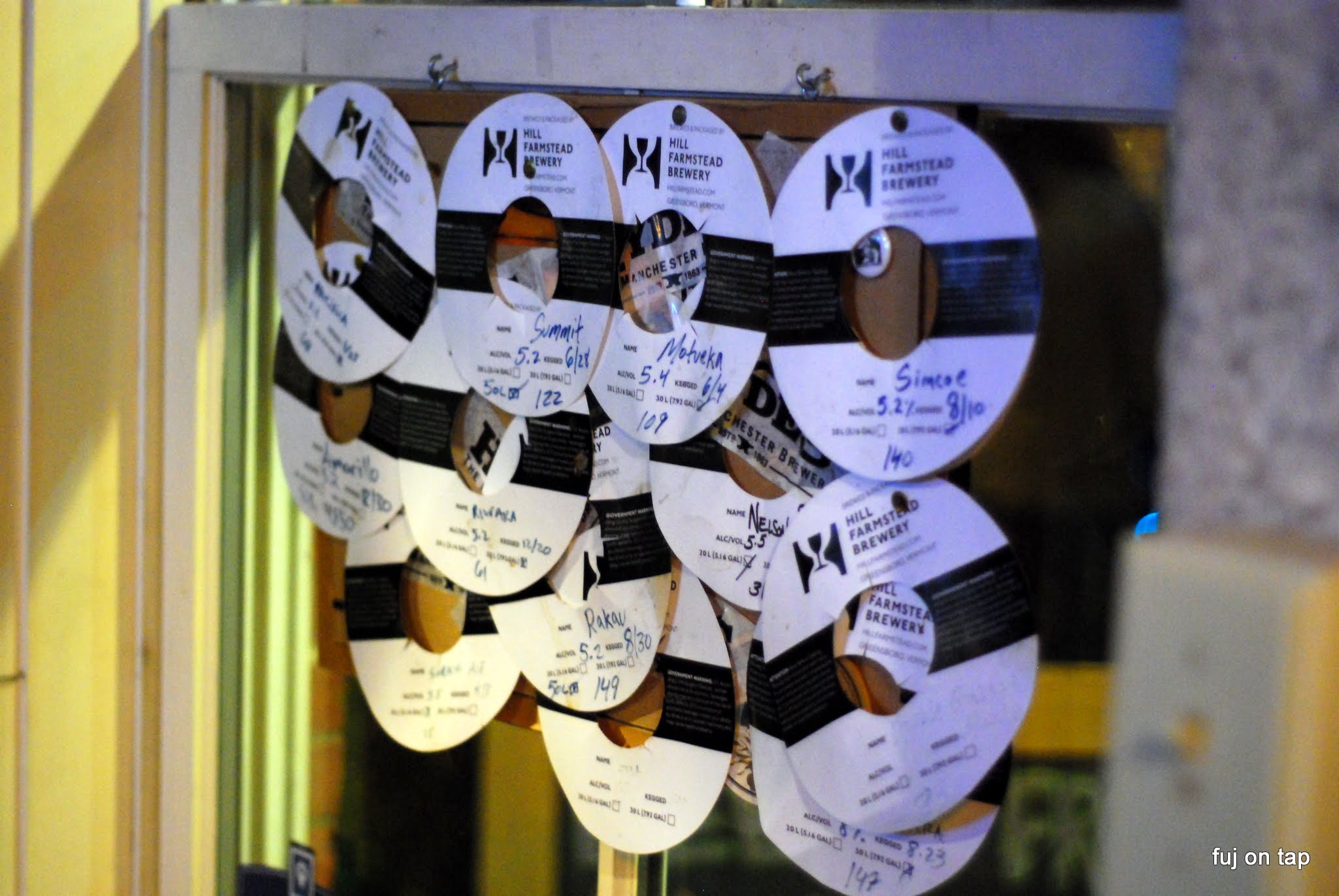 This is without a doubt my favorite part of the BCTC experience. Belgian after Belgian after Belgian gets old pretty quick (for me) these days so it’s good to take a break from it all and start drinking something different. That plus walking around meeting new people who are willing to share a beer and food, dropping in on other friend’s camp sites, watching the movie and the fireworks all make for a really great night.

We started the night drinking some really great beers, eating a shit ton of brats in sauerkraut, and ended the morning around 6AM drinking pretty much anything that still had liquid in it (several times I was chugging a magnum of Jameson, ugh). Yes, we were “those guys” who were being complained to “take it down a notch”. Yeah, that didn’t really work out, and pretty much all of the other stragglers that were still up at any of the campsites within earshot (and further) came over to hang out and kinda just made things louder. Honestly this was the best time I’ve ever had at BCTC and I thank all who were there to hang out.

Thanks to Mike, Jon, Scott Jr., and Adam for sharing!

The lineup of the night:

– First thing I did when we got home from Vermont (finally) was to round up the troops and break open these Hill Farmstead growlers. It was a no brainer. No point in sitting on them another minute. I also had some Double Sunshine from our last trip to the Waitesfield Farmer’s Market, and I ALWAYS have Heady Topper in the fridge so you know we had to drink all five side by side.

Pretty unanimous results from all of the beer drinkers present, too:

Society and Solitude #4 had this slight sting that lingered on the tip of my tongue I just didn’t love which was the reason for it’s ranking here, but obviously there wasn’t a single bad beer here.

One last pic from Jon:

Vermont DIPAs have ruined me for IPAs for life. Even the West Coast ones.

Independence Day at The Prohibition Pig

The last time I’d walked into this building was late last year. The appearance and the emotions were a little different that day. Back then, it was still called “The Alchemist Pub & Brewery” but it was only a shell of its former self. Irene had taken her toll on both the pub and the suds in the basement. I was there to pick up bottles of their “Hell or High Water” beers, which were the only beers left of the former Alchemist. I grabbed my case of beers, a shirt and was on my way; the first and only time I’d ever been in “The Alchemist”. Today, it’s known as the Prohibition Pig and walking in the same door sets a completely different tone.

Chalk-board art and even some news articles alluding to it’s past adorn the walls of The Pig. The bar on the right and the dining area are separated by a wall that greets you on your left. Like usual, we sat at the bar to chat up the bartender and get our fill of stories from the locals.

The bar, while dark, was beautiful. The taps (serving an impeccable tap list, by the way) were saddled by two huge bookshelves complete with a library ladder featuring all of the spirits used to make their impressive cocktail list. This was my first time seeing Heady Topper on tap and I couldn’t help myself but to do a Hill Farmstead Abner versus The Alchemist Heady Topper versus Lawson’s Finest Liquids comparison (pictured from left to right). 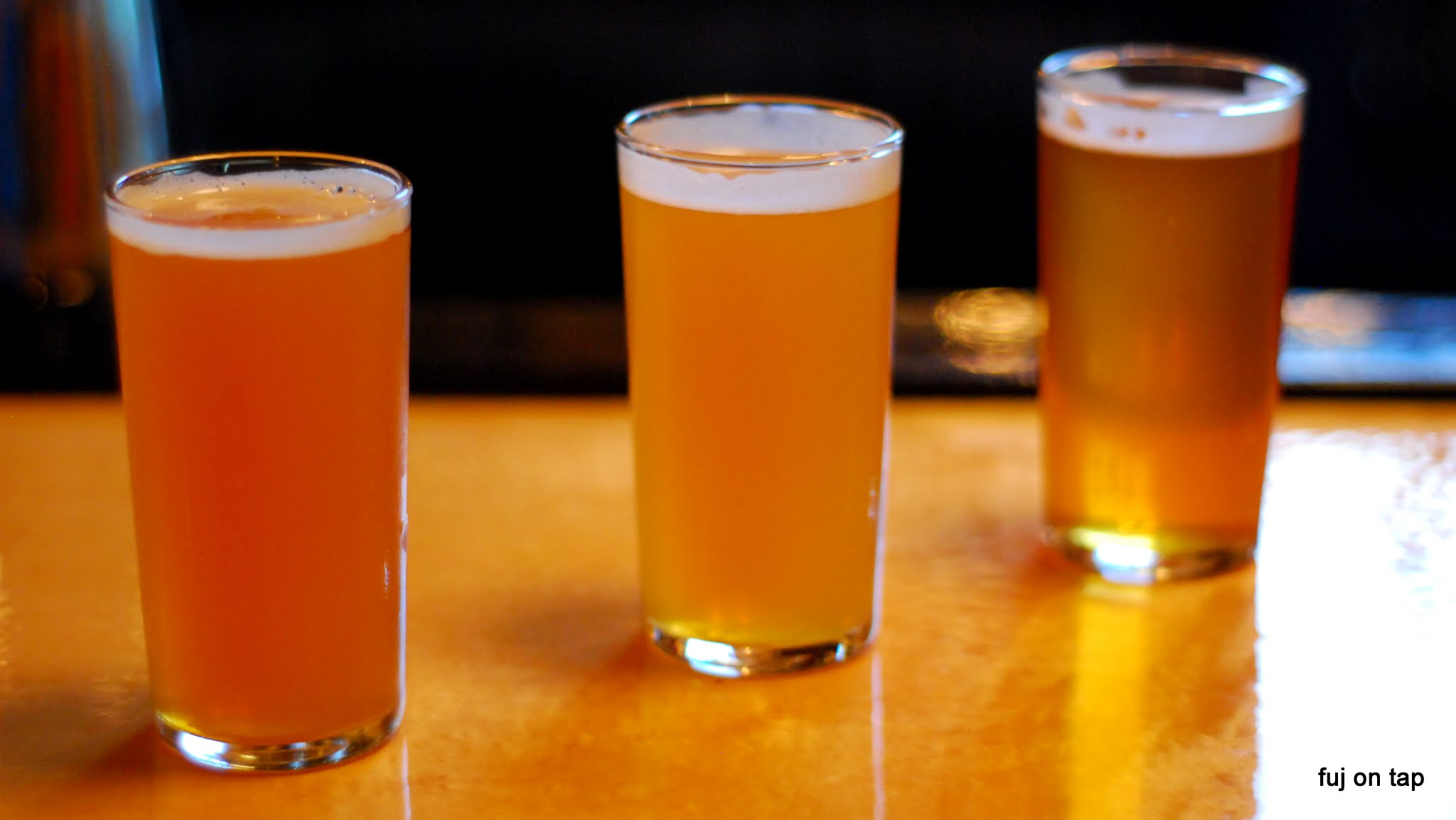 As much love as I have for Heady Topper, I gotta hand the win to Hill Farmstead. (I ended doing this same comparison with three other Hill Farmstead DIPAs later on this week again Heady Topper and Double Sunshine with a similar outcome. More on that to come.)

The problem with going to restaurants on trips like this is that I never have any idea when the next time I’m going to be back. (Sure I might be back in the area, but do I go back here or do I try another place like Hen of the Wood? Who knows.) Which leads to the question, do we get large main dishes or a bunch of small ones? Lately, it’s been the latter and I’m happier for it, since I get to try a larger array of dishes from the chef. Sometimes I get burned by this and don’t get to try something that only comes in a main dish, like the BBQ here at The Prohibition Pig. Oh well, the other dishes more than made up for it:

Let that lineup sink marinate in your head a little bit. It’s pretty impressive. They really knocked the food out of the park on this one. I absolutely LOVED the VT Cuban, and for only $11 it was worth every penny. Sadly, it started pouring rain and not knowing the situation with our campsite, our dinner ended rather rapidly. Well, not before sneaking in one last beer, a James Bean.

I’d never seen the beer before (only three other people had checked into it on Untappd at the time) and I assumed it was a leftover from a recent Allagash event. I LOVED Curieux the last time I had it and a coffee aged version definitely piqued my interest. It was a little strange getting so much coffee out of such a light colored beer. It was definitely a different beast than Curieux, and I suggest you try it if you ever get your hands on it. Some of the beer’s flavors are lost due to coffee overpowering them, but it’s a strangeness you just need to experience. (And the weirdness is done in a fashion where I’d drink this again, by the way, unlike some of the completely out their Dogfish Head beers.)

Plenty of beverage centers no longer carry Heady Topper due to shortages and their inability to pick up from The Cannery any longer. (I commented about this here.)  This means those of us who used to only travel to Manchester or Bennington for their Heady Topper fix are now making our way to Waterbury instead. If you find yourself in this situation, don’t hesitate making a stop at the Prohibition Pig. Not only are you going to be able to get some Heady and some other great Vermont DIPAs on tap, the food here kicks ass (and is making salivate here writing this and looking at the pictures of this post). Go here!