Only seven for me, plus the World of Beer chain mentioned in the notes for the South. Pretty weak. Gotta step it up in 2013!

How many have you been to? 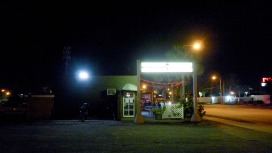 One of the places I knew I had to try when I was in Orlando was Redlight Redlight Beer Parlour. It’s unequivocally touted as the only place to drink in Orlando by Beer Advocate locals (also rated 97 overall) and was listed as one of America’s 100 best beer bars for 2012 by Draft Magazine.

Let’s get this out of the way: This is a dive bar and a half. Elise did not go into this venture with this mentality and was sorely disappointed. A shame since the beer selection here was amazing, the prices were ridiculously low (pints of all but the very rarest of beers were $4, including imperial pints) and Big Bruno’s Bites was slinging delicious food truck grub all night long.

They had several beers on nitro (which is a weakness for me) that I sipped on while we chowed down on some Old Bay fries. They had fried oreos on they menu as well but after my carnie-filled day at the Strawberry Festival I decided to abstain. Entertainment was provided by the staff and regulars as a box of Shipyard thongs were delivered in anticipation of the upcoming St. Patrick’s Day festivities.

It was an early night due to Whiney McWhinerton not loving the place and being beered-out at this point of vacation. Next time I visit my brother I will definitely be spending some more quality time here.