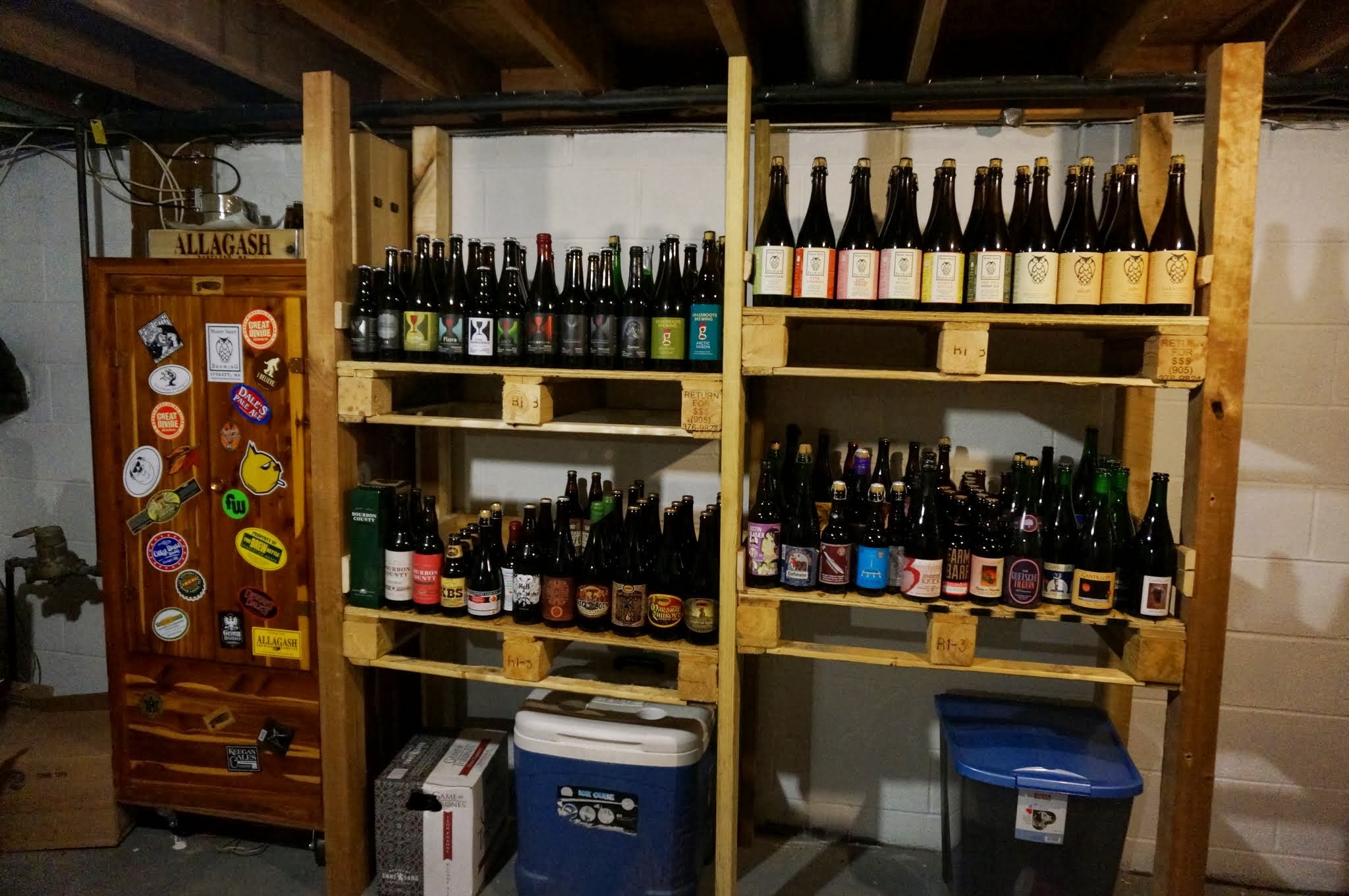 Took on this project over the weekend. Man, what a pain in the ass. I’ve seen posts on pallet shelves before and they all make it seem like these things basically put themselves together on their own. This is not the case.

I was running out of room in the beer cabinet and with bottles all over the table we use for bottle sharing during inclement weather and the colder months we lacked a place to bottle share during the upcoming fall and winter time (I know, #firstworldproblems). Shelves were needed, and some mass produced press board shelves from a big box store just didn’t feel right. I started the project with a few Google Image searches and decided the shelves over at Simply Janelle Designs were about what I was looking for my beer shelves. After asking around on FB I found decided to go “pallet shopping” around a few places in Albany while trying to figure out what I was going to use for the posts to hold the thing up. By the end of the day I ended up with a bunch of pallets and a 10 foot skid strapped to my roof: 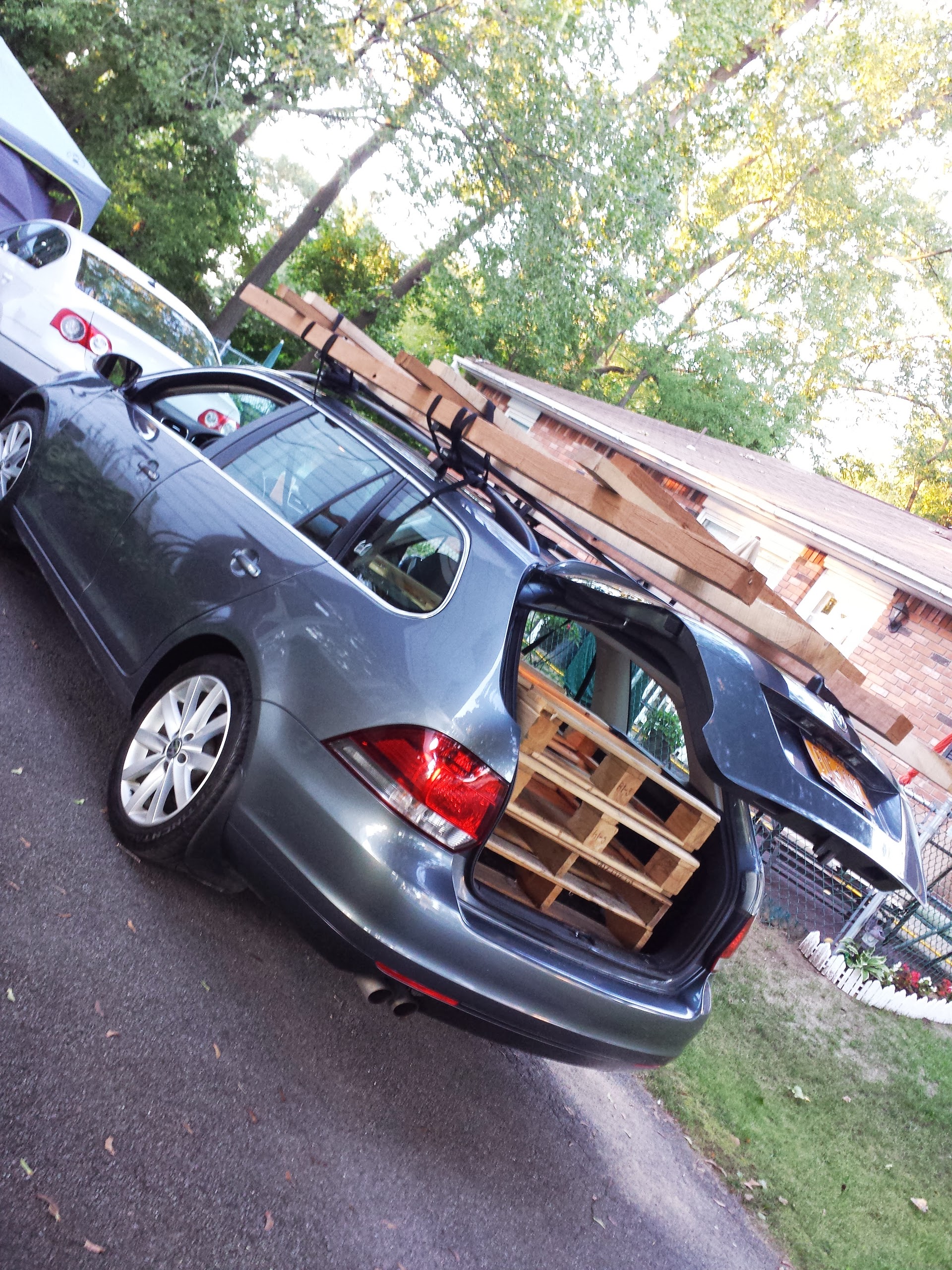 Getting the skid on the top of my roof by myself was no easy task, and my SportWagen has suffered as such, but sacrifices need to be made for the protection of beer. The skid provided some great 3x4s for the posts, plus six 2x4s I would use later on.

Of course, this structure would be holding my precious, precious beer so any regular ol’ pallets would not do. Once I got home I started tearing the pallets down to the skeleton, reinforcing them with 2x4s from the skid and resurfacing them with half inch plywood. These would be pallets in appearance only, they’d actually be some completely over-engineered, hand-built heavy duty shelves in practice. Once the shelves were built, actually getting them attached to the posts, level and square would prove most challenging. As one man, I could not hold the posts up while also holding the shelf in the air to attach the two together. Trying to do so with the posts lying on a couple of sawhorses, even with checking and rechecking my measurements multiple times before each hole was drilled, proved to be a disaster when actually standing on the ground. “Pathetic” was the only way to describe the structure. 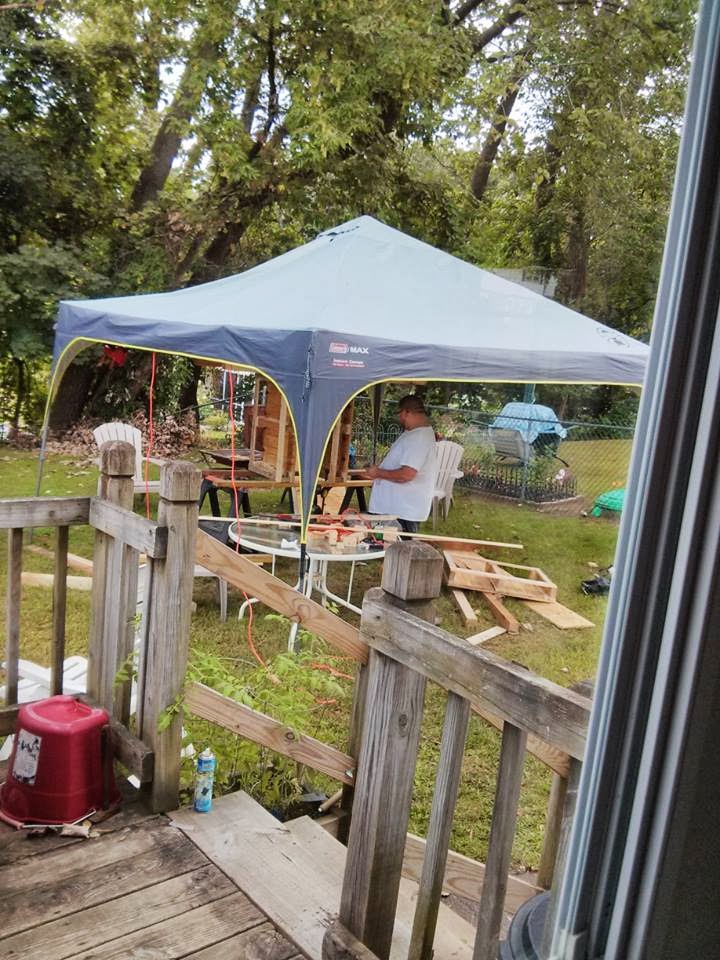 I had finally thrown in the towel on Sunday morning and called my brother up to give me a hand getting this thing off the ground. After a couple of trips to the hardware store we decided to switch gears a bit and go from bolts like I was originally intending (so I can take this thing apart and get it out of the basement if I need to when we move) and instead just hit it with decking screws and lag bolts. It may be a bigger pain in the ass to take apart down the road, but it was much easier to put up and it sure as hell isn’t going anywhere. At this point, getting it free standing and as level as it was going to be called for a beer or two. The temps are getting a little cooler out so we celebrated the accomplishment with some Tree House That’s What She Said and The Lost Abbey Serpent’s Stout.

After beers, I hacked together a few more pieces to make sure bottles can’t slip out on the sides or out the back with a few pieces of wood left over from breaking down the pallets, as you can see in the pic at the top of this post. Overall, I’m really happy with how it came out, there’s room for another shelf and/or a beer glass rack like we have in the kitchen, plus room I originally planned for underneath the shelves for the cooler, camping gear, Kuma’s food and a few other odds and ends.