Ebenezer’s Pub has been on my bucket list for what seems like ages. I think I first took interest in Eb’s when I started paying attention to Draft Magazine’s Top 100 list and it was always prominently featured year after year. Of course running in the New England beer circles I run in the pub is always touted with high praise. And I’ve come across countless articles mentioning Eb’s as the “Greatest Bar in America You’ve Never Heard Of”, on a list of “Top Bars to Visit Before You Die” or something of the like. After my first visit to Ebenezer’s Pub, meeting Chris Lively and his crew, and attending one of his amazing events, I’m inclined to agree with the sentiments above.

There’s some back story everyone should know about the “Nacht van de Grote Dorst”. (I’m going to paraphrase here, since there isn’t a lot of info on the internet and what is out there is mostly in Dutch.) Back in 2003, the Belgian Federal Agency for Food Safety saw lambic breweries as a threat to public health. The issue was the environment in which these beers are made: they contain wooden beams and wooden barrels that are home to the microorganisms and wild yeasts the agency deemed unsafe. Unfortunately, this is exactly the environment needed to make lambics the lambics we know today. Thankfully the government saw the error in its ways and made the exceptions for breweries to continue, and the Nacht van de Grote Dorst (Night of Great Thirst) has been a celebration of all things lambic ever since. Luckily for us, we do not need to travel to Belgium to partake in this experience; Ebenezer’s brings the celebration stateside.

If you didn’t know this, Adam Jackson and I share the same birthday. We had both been talking since the beginning of summer about how we’d really like to go to Night of Great Thirst as it fell on the weekend closest to our birthday, but there are a LOT of bottle releases, a lot of beer events, even non-beer related things going on like family parties and friend’s weddings and such throughout the summer, hindering funds. As the end of summer drew near, it didn’t really look like it was in the cards for us to make it to Eb’s this year, but after meeting up at the Festival of Farmhouse Ales, we chatted and decided that we could still go and do it cheaply if we split gas, split bottles between ourselves/others and limit it to the one night that the Night of Great Thirst was taking place instead of multiple nights like some of our friends. The night before, I headed up to meet Adam at his place to crack a few beers, have dinner, and make the trip a little shorter in the AM. Thank you for the hospitality Adam and Eliz (and Goomba!).

We arrived early enough to still have plenty of time to set up our tents and grab a lunch before the main events began. The tap list, no surprise, was insane and there were some nice Belgium-themed beer pairings and entrees being offered that afternoon. Adam, Chris and I shared a few beers over lunch and we were eventually joined by Ruth before heading back to camp. Not a bad beer in the house. 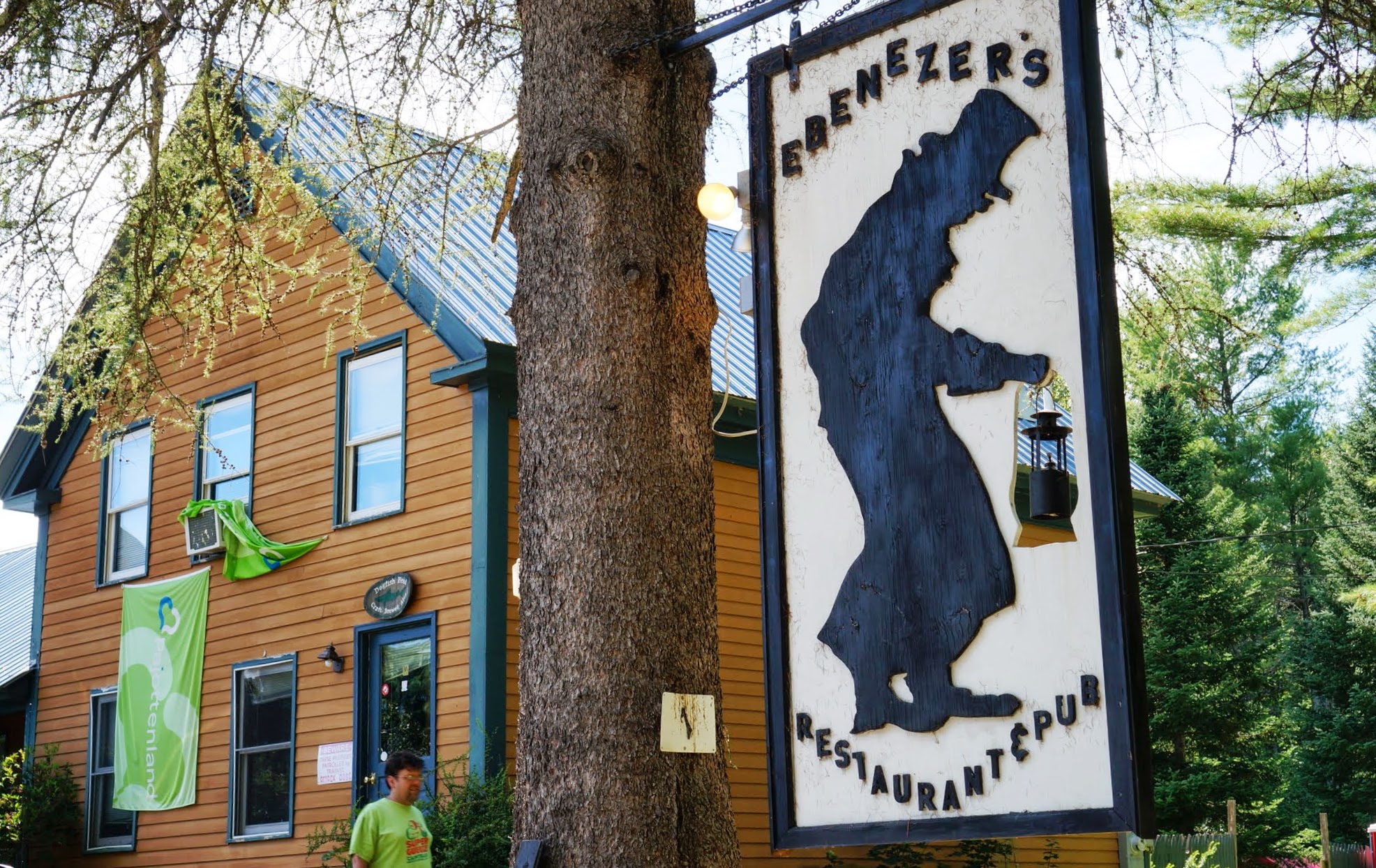 Adam taking pictures of beer. It’s what we do.

Ebenezer’s Pub Taps
After lunch, we warmed up with a few beers shared between all of us camping out that night. Some really solid stuff here.

After a little communal beer sharing was finally the main event: The Night of Great Thirst. Each brewery had their own table set up, with a dizzying array of some of the world’s best lambic. Volunteers (some from WHYM Craft Beer Cafe in Portsmouth where I desperately need to check out) offered pours of some beers and full bottles of others. The rarest of the bottles were meant to be shared, and encouraged drinkers to find friends to split the bottles with. This worked out great for me, since there were plenty of friends in attendance and I was able to try some of the beers like Angel’s Foam and 50n 4e I would never have the ammo to trade for otherwise.

Adam and Chris with Joe Tucker of RateBeer

Ruth and Yves Panneels of HORAL

Twin Gueze Art Edition
There were two presentations in Ebenezer’s cellar available that night, and the one I chose was with Yves Panneels of HORAL and In de Verzekering Tegen Grote Dorst (Insurance Against Great Thirst). It was an in depth conversation about the origin of lambic, the different styles and requirements for each style, and where the future of lambic is heading. A charcuterie plate and generous pours of Framboos, Cuvee des Champions, Geuze von’t Kasteel, and Twin Gueze Art Edition were included with the ticket and the whole presentation was the best deal going of the night.

Night of Great Thirst Lambic Presentation
Afterwards we headed back to camp to partake in the insane bottle share and food smorgasbord that Mike and the rest of his crew had lined up. Every amenity you could think of was available, and the food list was top notch. Smoked lobster, horse meat, Ruth’s cheese plate; the list goes on. These people know how to do it right.

Yes, there was even a Big Green Egg up in here

Our chef for the night

Chris Lively being as generous as he is, he handsomely rewarded the volunteers that helped make the Night of Great Thirst happen. These were a great group of folks and I was happy to document them celebrating the end of a long day.

Last but not least, the Ebenezer’s crew got up early enough to start slinging breakfast for all of us in need. We got up early so I could make it home in reasonable time with the 5+ hour trip I had ahead of me. Probably too early to necessitate breakfast with the hangover that accompanied me that morning, but given how great the rest of the Ebenezer’s Pub experience was, I didn’t want to miss out.

With breakfast behind us and the tents and the rest of our gear packed up, it was time to bid farewell and end our first Ebenezer’s experience. It was an amazing one, and something I’m looking to repeat next year. With any luck, I’ll be able to get up there again in the meantime and experience Ebenezer’s with a little less bustling of activity, as well.

2 thoughts on “Night of Great Thirst at Ebenezer’s Pub”