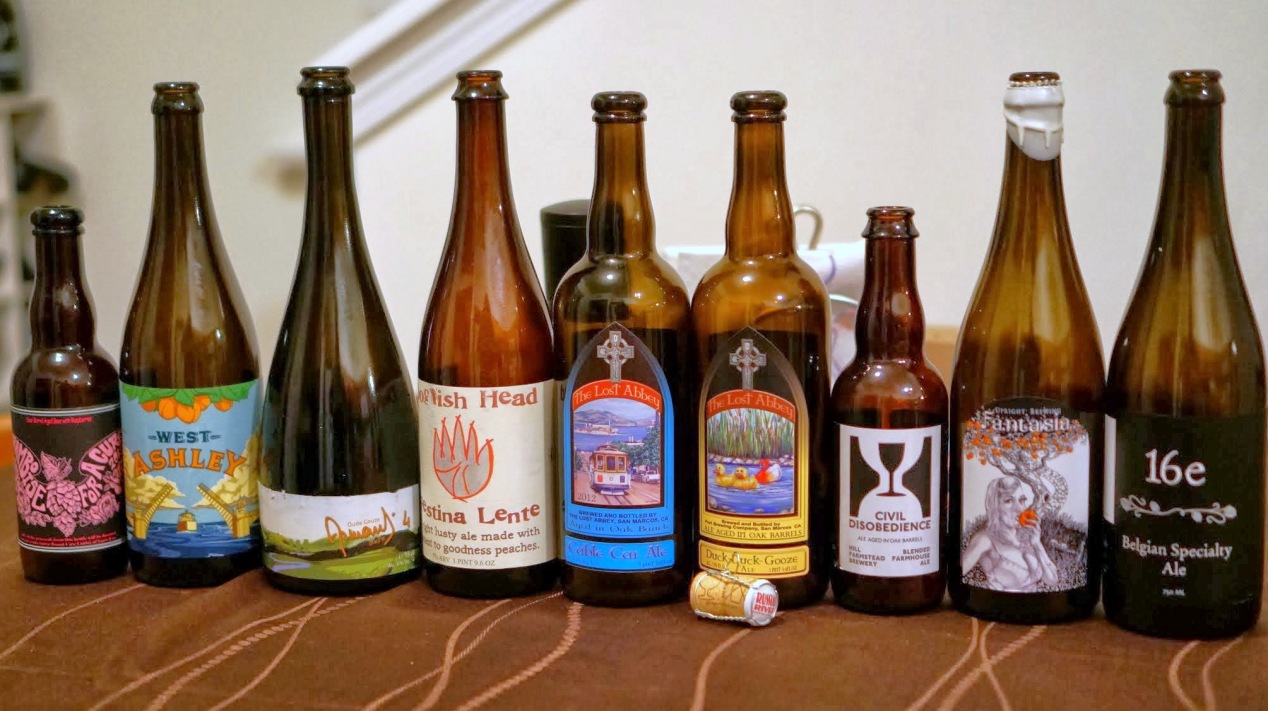 James wanted to start off with these two beers first to make sure we all had a clean palate. (I’m sure cost him an arm and a leg in trades.) Tough to do these side by side given that the DDG was the 2009 vintage and was way, way more complex and funky than the 2012 Cable Car (and absolutely shamed the 2013 vintage of DDG at Night of the Funk, as well). While both beers are blends of different barrels, DDG is blended with several different vintages of the same beer, while Cable Car is a blend of a barrel aged, saison, a barrel aged Bière de Garde, and a barrel aged lager. Both beers were fantastic and I really appreciate James sharing with me, but Duck Duck Gooze was one of the standouts for the night.

Festina Lente is a lambic that was brewed a decade ago by Dogfish Head, fermented with wild bacteria and aged on peaches and oak chips. No surprise, the beer was almost completely still at this point, and is definitely falling off, but it was really interesting how much peach was still present in the flavor. If you are still sitting on one of these and haven’t had it yet, I’d pop this one soon. 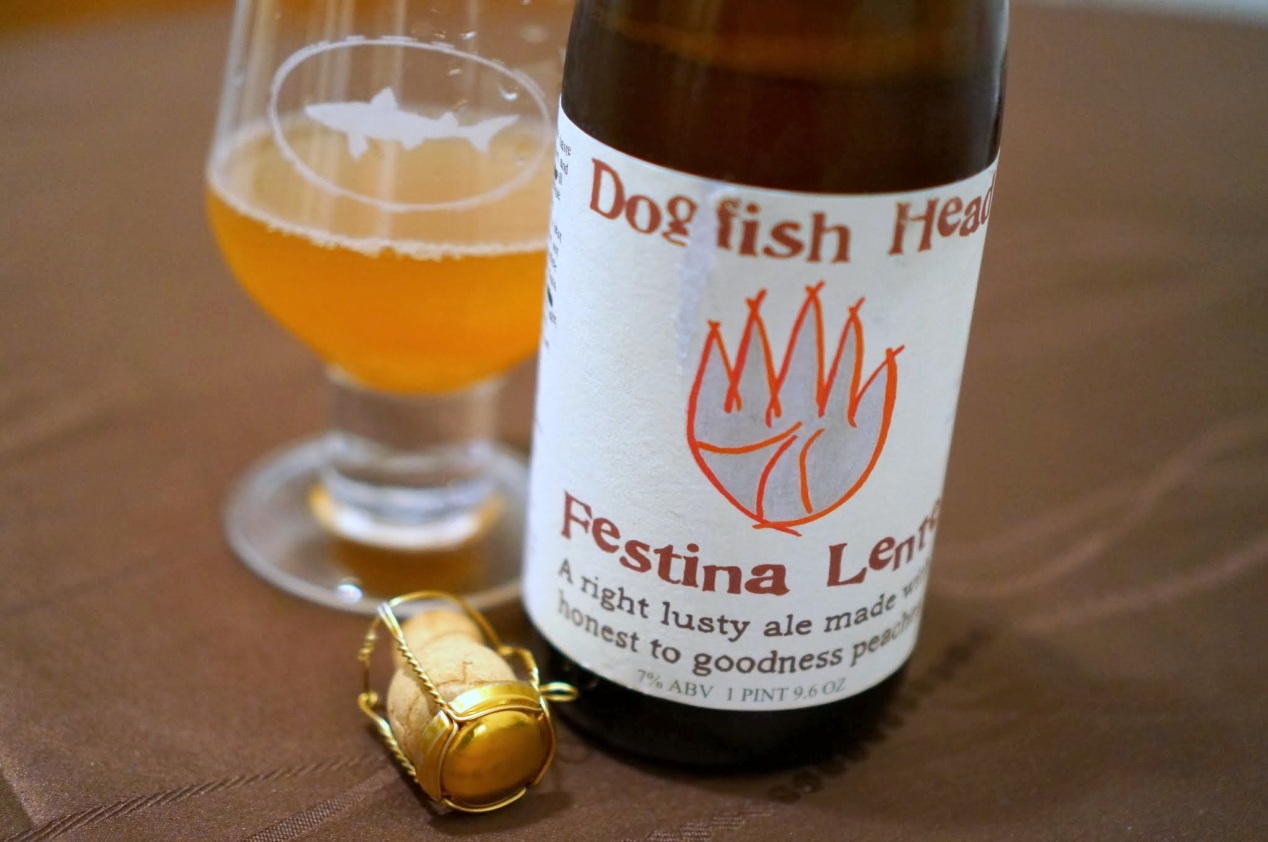 The components of Civil Disobedience #7 were quite obvious while you were drinking. It was very much Art and white wine barrel up front, with a hint of Cantillon funk in the background that became slightly more prominent as it warmed up. This beer is only going to get better with age. 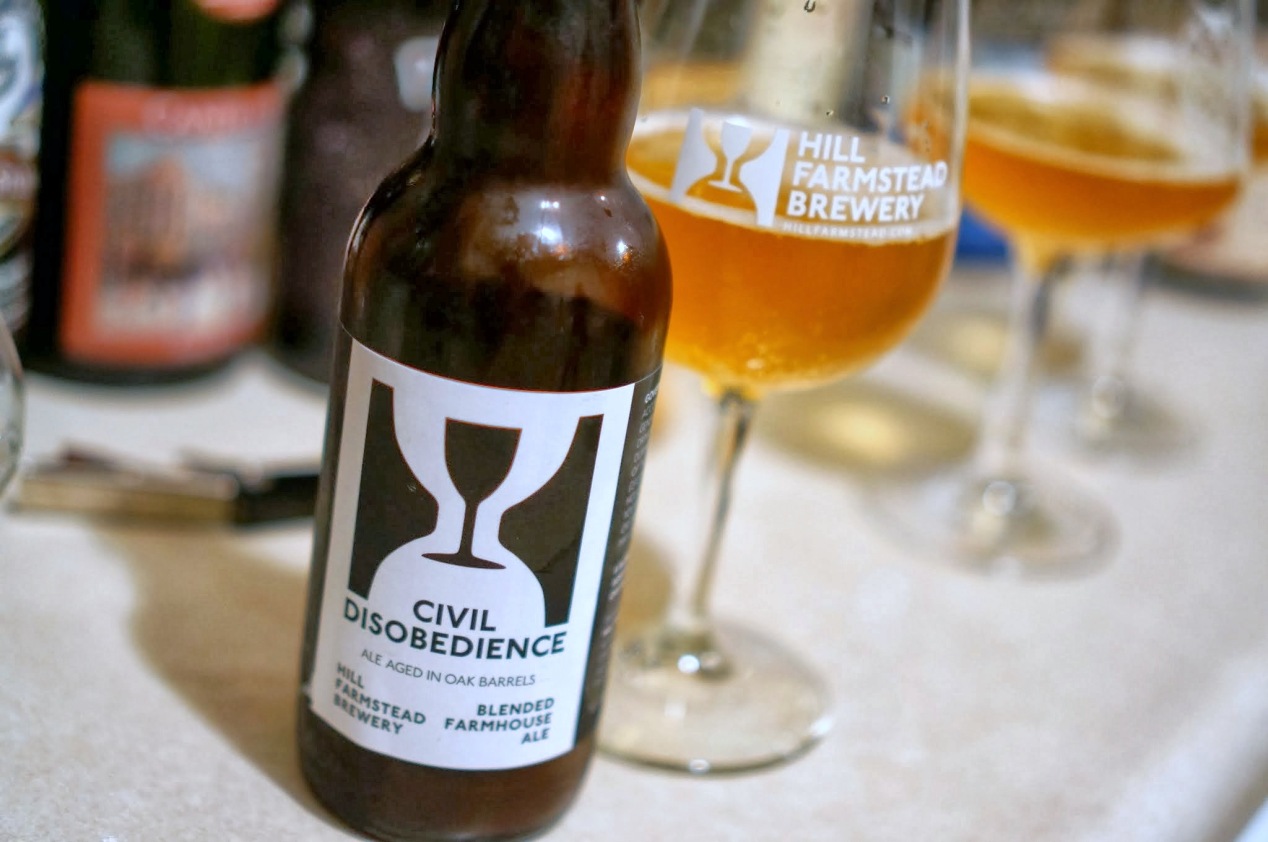 No night of sours is complete without a container of these to share. 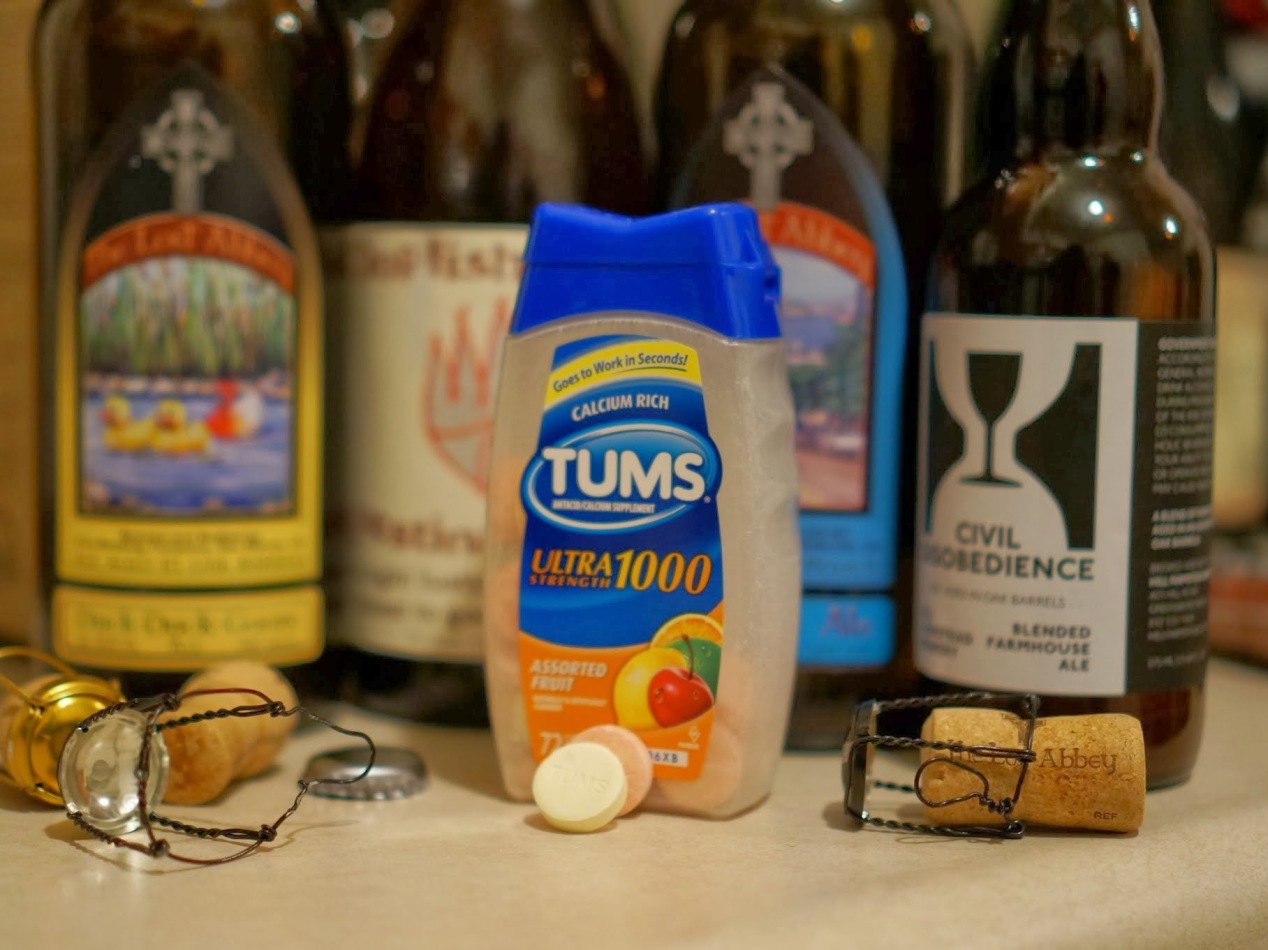 For those not familiar with the Armand’4 collection of beers, these consist of the last batches of lambic that were produced by Armand Debelder before the thermostat incident ceased brewing operations. Each bottle was done a different day, one for each season, with Lente representing the Spring bottle. The general consensus is that Lente is the best of the four seasons, and while I have not had the other three, Lente may have been the best beer of the night. (Please disregard the half eaten chicken wing in the pictures.) 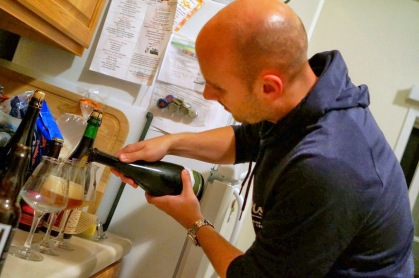 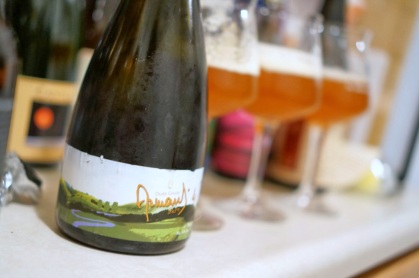 Naturally a food break was needed. No need to ask me twice if I wanted a pizza called “The Carcass”.

Upright’s Fantasia is wild (not spontaneous) fermented completely in oak barrels and loaded with fresh peaches from Baird family orchards. It’s one of my favorite beers from Upright, the best of theirs I’ve had. Surprising that the 10 year old Dogfish Head had more peach flavor than this, however.

This boysenberry flavored beer from Sante Adairius was the most polarizing beer of the night, and not just because it was the only stout we had. When I think “sour stout” I think more Tart of Darkness than anything, which has a mouthfeel closer to that of a porter than a true stout. Adjunct Professor though has a huge, creamy mouthfeel that almost feels inappropriate for souring. That coupled with my lack of enthusiasm towards stouts with fruit in them, I was not a huge fan of this beer. I enjoyed the opportunity to try it, but I would have been fine with a 4 ounce pour rather than third of the bottle. 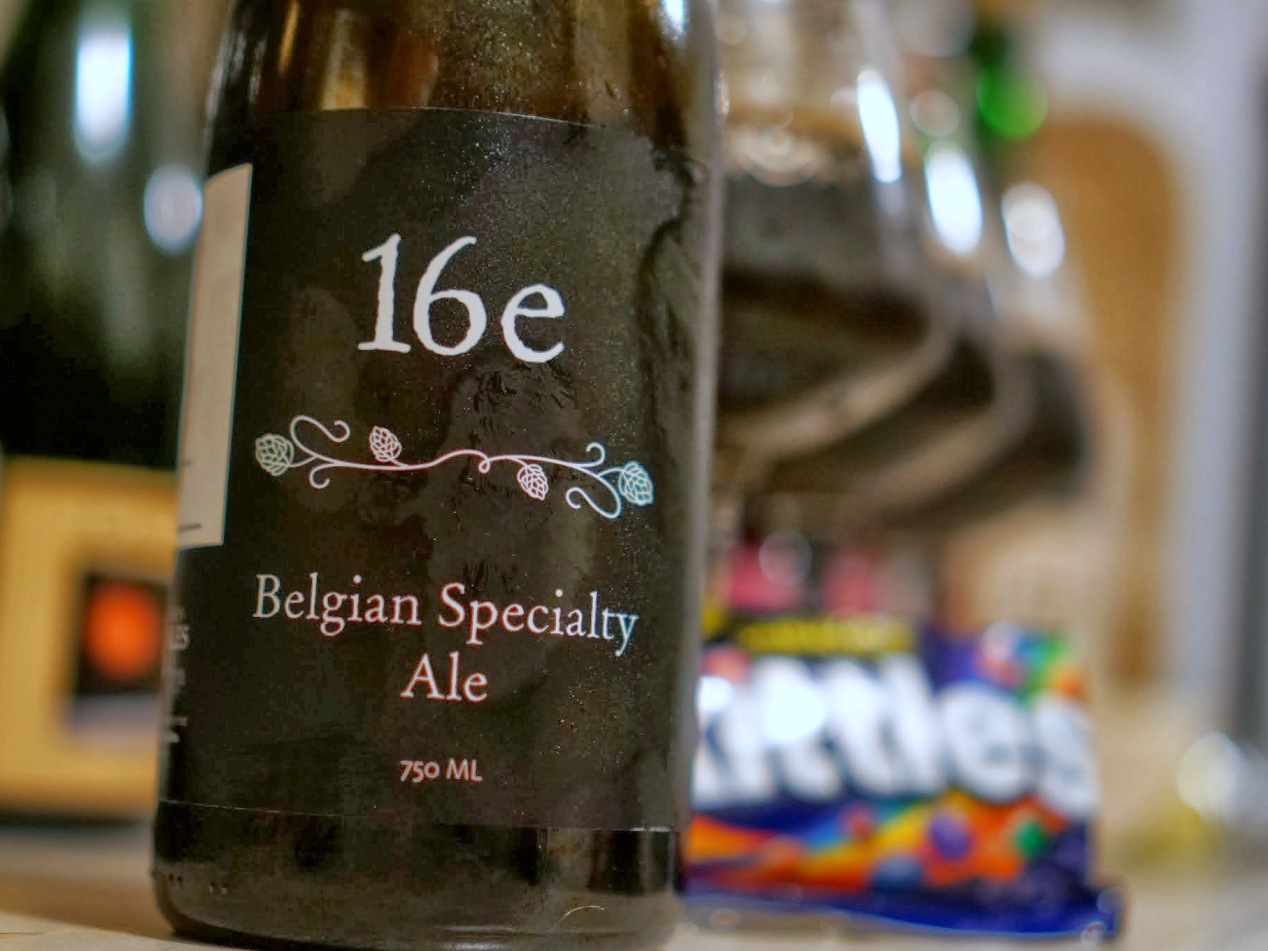 SARA’s West Ashley was much more my speed. Tons of orange and apricot flavor to go along with a tame lactic tartness.

And to round out the night we opened one final bottle, Russian River’s Framboise for a Cure. This chardonnay barrel aged blonde ale has 30 pounds of fresh raspberries added to the barrel, imparting a some fresh fruit taste to balance out the tartness. 100% of the proceeds of this beer is used to fight against breast cancer, a cause I’m sure all three of us would agree on is worth a revisit.

Russian River Framboise for a Cure

Well, that’s a wrap. Pretty amazing night with an epic selection of beers, although DDG and Armand’4 Lente took the cake for me. Look out for the next one coming up next week with the return of Merc!